At it again, I'm afraid.  Well, it's the holidays - and the provocations keep coming ... (with apologies to AA Milne this time)

"China bans Winnie the Pooh film after comparisons to President Xi:
Memes likening Xi to the portly Pooh have become a vehicle in China to mock the country’s leader" 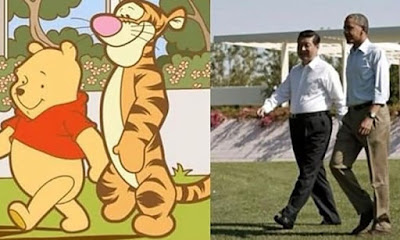 A man, however hard he tries
Grows tubby without exercise.
Our Paramount Leader’s rather fat
Which is not to be wondered at;
He gets what exercise he can
By toiling at his masterplan
Which, though important work for him
Leaves little time to use the gym


Now tubbiness is just the thing
Which gets a fellow wondering;
And our man Xi is most distressed
To think he’s mocked in jibe and jest.
He thought: “if I put out the word
(and what I say is always heard)
I’ll put a stop to all that stuff -
The world will see I’m really tough!”

The censors jumped at his command;
Tigger and Pooh were swiftly banned.
And Eeyore too: all swept away –
We cannot have lèse majesté.
And all the world can see at length
That banning thing’s a sign of strength!

Thanks to all at C@W for some outstandingly clever posts during this silly season.

Top work, I can't stop snigering to the bemusement of my colleagues!


My secret for waistline management is NEVER UPSIZE YOUR TROUSERS. Stop eating and start moving if things get a bit tight.

For the older gentleman I can recommend a Bullworker Steelbow (or an old X5) and a bit of jogging, working up to 15 minutes (including 3x 20second sprints, or as best you can) on the days in between. Never more than 20 minutes a day, never less than 10.

No excuses and the results are beyond belief.

Very good except that he last line doesn't scan. I suggest: "That banning is a sign of strength."

I'd offer my services as President Xi's personal trainer.

A sign of strength is a six pack and a pair of guns. Instead of looking like he's holding a barrel out front he'd look like he's carrying a carpet under each arm.

I'd leave the power pose training to Sajid Javid. Together we'd restore Xi's self esteem in no time at all.

The cover of Men's Health beckons and we could release the Pooh.

I never used to care about people's weight as I was a chubby nerd for most of my life but it's increasingly clear to me that fat people are stupid.

The obese leader of a superpower is scared of Winnie the Pooh memes.

Every day I see overweight hyper-consumers claim to be a anti-capitalist environmentalists.

Even physicists suddenly become anti-science when you tell them that conservation of energy applies to their bodies.

Scansion depends on stresses, not counting syllables; and to bring "thing" into the line, you have omitted "a", so the grammar is dodgy too.

The rest is excellent.

Notwithstanding your kind comment on "the rest", I draw your attention, m'lud, to Line 3, which also requires a certain elision when said out loud

(I could also cite many examples from, ahem, Shakespeare or Byron or ... - but modesty forbids)

What a civilised blog this is!

Thats a corset he's wearing, or I'm a chinaman.

Roses are red
Violets are blue
Xi is a stinker
What sayeth you?

THIS BLOG IS HEREBY CLOSED, AND ITS CONTRACT WITH THE SILK BELT-AND-BRACES TERMINATED

BY ORDER OF THE GREAT FIREWALL OF CHINA

"... it's increasingly clear to me that fat people are stupid."

Well I heard this advert on the radio today:

No. People who eat KFC are stupid. And that Col Saunders' 'secret' recipe ? It contains asbestos, clearly. The KFC is about the only thing left standing after a weekend of rioting.