Jailbirds I Have Known (1) 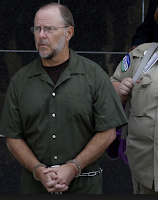 So - Elon Musk slips past the slammer.  Not so lucky was Jeff Skilling, also done for misleading shareholders (and a couple of other things).  The SEC was in a more vengeful mood after the Enron meltdown - at the time, the biggest corporate crash there'd been - resulting in a $45 million fine, and 24 years inside.  He thus became the third chap to enter my short list of personal acquaintances who've partaken of the porridge.

Skilling was an amazing chap: not only a visionary, but someone who could execute on what he envisioned and implement it - a rare combination indeed.   He was the kind of leader who commands by sheer force of knowing exactly what to do, in circumstances where everyone else is scratching their heads over the sheer impossibility of the task they've been given.  He's often described as arrogant, but that was no part of his demeanour - he's a small chap, and as personable and approachable as could be imagined for someone perpetually under enormous pressure and with huge responsibilities.  He wore his intellect lightly, and while he probably had no time for fools, well, he didn't have time for very much at all, which was far more to the point.

The pressures, responsibilities and impossible tasks were all of his own making.  He had a vision of the gas and electricity markets that was as radical as Bill Gates' dream of putting a computer on every desk.  He was going to take those two commodities - previously the preserve of monopolies the world over - and make them into traded commodities in open, liquid, competitive markets.   Enron was to be his vehicle.   Nowadays, what he envisioned might almost seem commonplace; but consider two gigantic reasons why this was highly visionary and utterly revolutionary.

Firstly, there was a body of economic doctrine holding that natural gas was a "paradigm example" of a commodity that could not be traded - for specific, real and enduring phsyical reasons.  No-one was even contemplating the idea that electricity, too, could be traded; those same physical aspects were present in even more extreme form.  These things were impossible!

Secondly, the status quo was dominated by statutory monopolies with considerable political clout and absolutely no interest in seeing things changed.  Indeed, they didn't even believe change was possible - a weakness in their position, because they didn't exert themselves against Enron quite as fully as they might.

That isn't to say the acquiesced.  Far from it: they lobbied and stalled and blocked and abused their monopolies royally to fend off the coming of open markets.  Albeit clumsily, every man's hand was turned against Enron - hardly what Gates faced when promoting his own ambitious vision.

But Skilling was a true Field Marshal, understanding the multi-front theatre spread before him and judging exactly how to conduct operations across so many battlefields.  He chose his subordinates well, commanded their complete confidence, turned them loose with compelling orders and strategies - and won engagement after engagement, battle after battle against his powerful but sluggish and uncomprehending foes, until the whole world of gas and electricity rolled up before him.

There's a load of rubbish written about Skilling, and Enron in general.  It's fair to say, not a single true insider has written a book yet (Sharon Watkis wasn't remotely 'inside').  Yes, manifestly, the whole Enron thing devoured itself in the end: the reasons are for another day.  Yet Skilling gave a pedestrian medium-sized company - a gas pipeline company! - an extraordinary 14-year run of non-stop growth.  By the end, it was the largest commodities trading empire and market-maker the world has ever seen.  Trading gas and electricity, as Skilling had foreseen, was not impossible, even though it was very difficult.  And then coal ... and paper-and-pulp ... and base metals ... and financial derivatives on everything ...   A mere 18 months after inception, Enron Online was the world's largest B2B site, transacting some $2.5 billion a day, click-and-trade, across more different contracts than you could shake a stick at (approx 2,000).  In every large energy company you visited, you'd find at least of third of their trading books were with EOL: in the smaller ones, often more.

By the end, everyone was an Enron wannabe.  David had taken on a score of global Goliaths, one after another, and felled them all.  Now, even China plans to open up its electricity markets - and Enron hasn't been on the scene for 17 years. Skilling's legacy is everywhere you look, and very tangible indeed.

Incidentally, he was "released to a halfway house" in August this year.  That's 12 years inside, albeit mostly in low-security.  Few people enjoy being locked up:  but as a rule, middle class people really don't enjoy it.

very good! You can come again

So what went wrong???

A chap I knew as a fresher appeared in the national news decades later, being jailed for the attempted murder of his wife, by poisoning. Not a very good biochemist, I suppose.

Hi, Nick! It's been a while since I commented on that Melbourne quote, but I have been reading the blog diligently in hopes of coming across something that I might be able to offer some semi-informed comment.

This may be it as for many years I was an energy lawyer with the principal law firm that defended Enron after the collapse (note: not the one whose soundness opinions helped get Enron into trouble). That was slightly before my time, but I learned this when I turned a draft of my brief in one of the first market-manipulation under the new laws inspired by the Enron collapse which contained a passage showing that our client had behaved nothing at all like those nasty people at Enron. I was very nicely informed by a partner that this was very nice but that the firm makes it a practice not malign its former clients.

My understanding, based on this and Kurt Eichenwald's actually-quite-good-and-fair Conspiracy of Fools, is that while a fair amount of skullduggery went on and some senior Enron executives, in particular CFO Andrew Fastow, were just plain old-fashioned thieves, the misconduct of others (including Lay and Skilling) was at worst a much much paler shade of grey.

Skilling's case is in my opinion a particularly tragic one. After having done all the remarkable things recounted in the original post, he basically retired from Enron, was not involved with the thefts, either as beneficiary or even by turning a blind eye.

Only after Enron began to collapse (due to the thefts, the accounting issues, the malinvestments; not the markets that Skilling had created and which turned out to be a goldmine that kept Enron afloat) did he agree to return as temporary CEO to rescue the company he had done so much to create. It was during those few months that he made some rah-rah type public statements (things along to lines of how Enron was in a difficult situation but he was sure they were going to pull through even as he knew that quite possibly it couldn't). And it was on the basis of these statements alone that Skilling received a sentence substantially longer than most rapists or murderers.

Now in general I don't have a problem with the idea that if executives of public companies make public statements that they know or ought to have suspected were not true, they should face liability, including potentially criminal liability. However, look at Skilling's situation at the time. If he had spilled his guts, it would have instantly dried up all credit to Enron, dooming it. If he had refused to comment, the effect would have been the same. So his only choices were either publicly stating something he had doubts about or forfeit whatever chance he still saw of rescuing Enron.

Now, I think he should have done the latter. But the former is a very human response. Given that he did not personally profit from these statements and that he, along with Lay, was probably the largest individual loser in Enron's collapse, I think he deserved the leniency of a brief or suspended sentence, not the monstrosity he was subjected to.

Carl - you are always welcome here: and thanks for the additional colour. Glad to hear you are not with "the one whose soundness opinions helped get Enron into trouble" (Andersen deserved to go down, and it's a wonder to me that the lawyers didn't suffer the same fate. Political clout is a remarkable thing ...)

anon - Enron's fundamental problem was the oldest thing in the business book: an ongoing cash flow crisis. The firm was genuinely profitable, but had a systematic cash-flow lag AND it was constantly expanding AND it was never rated better than BBB+. Because it depended on long-term deals for its business, and hence dared not slip below Investment Grade, it couldn't square the profit/cash dilemma with borrowing.

To start with, the solution was some very smart balance sheet structuring and really clever (and initially, to my mind, completely legit) securitisations. Fastow was the main man behind this effort, and won a crazy amount of trust and freedom-of-action from Skilling and Lay. Two things resulted: (1) the financing deals became ever flakier ("trust me!"); then (2) he started really abusing his position and, in amongst the dense smoke & mirrors, commenced outright theft.

You know this criminality was very limited within the corp, because almost all the very senior guys lost almost everything - their 'paper wealth' was predominantly held in the form of Enron stock. (I'm not saying they were paupers, mind.) If they'd had half a clue what Fastow was really doing, they'd have diversified a lot more. But Fastow? When it all went belly-up, it transpired his money was invested in municipal bonds!

Obviously you know a higher class of jailbird.

A recent associate of mine was convicted of indecency. He got himself a job in a holiday park as a general handyman and built himself a masterbatorium above the ladies' shower block. A suspicious colleague climbed the ladder to the hatch and caught him mid performance.

He'd built himself an elaborate suspension system from the rafters and she caugh a view of the wrong end of this chap, naked but for socks, doing what he did best.

I laughed. He was one of those chaps who used to ignore me and walk past with his nose in the air. I also suspect he used to bad mouth me going by the way I seemed to kill conversation whenever I walked into the room.

I punched the air with delight when I heard this corker !

Having just read Carl's contribution - I felt, on reading the original post, that this was a tragic case and I hope that Mr Skilling makes a new and fulfilling life for himself.

Sorry to have lowered the brow here, yet again !

Were the jury shown photos? I feel there is a public interest requirement for the evidence to be revealed.

And what about Lehman Brothers too? What happened to some of the staff there?

A well-placed UK lawyer who checked the deals ends up as an MP. Suppose a few years in the HoC could be termed a 'suitable punishment'.

Eichenwald is indeed pretty balanced and fair. For example, he states that the hanky-panky only dated from around 1997 - I think that's broadly right, although some of the seeds had been planted a tad earlier. He also opines that the trading operation was well-managed, with good controls and risk management: that's also correct. In spades, actually: Enron positively invented the controls and RM that were needed for a market-maker in gas & power, and for dealing the complex derivatives and structured deals they specialised in. They took pre-existing stuff from the banks, for sure, but it needed a great deal of adaptation (including some actual new maths), and was sound more-or-less to the very end (and widely emulated to this day)