Book Review: The Power of Capitalism 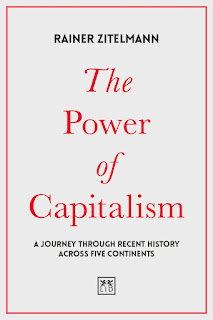 In a break form our usuel dirge of Brexit non-news, I wanted to share a book review.

As you may expect from the title of the this blog, I thoroughly enjoyed reading this book. For me as an amatuer armchair historian this book really hit the mark. Rainer Zitelman is a historian rather than an economist or political scientist.

In the book he start by giving over several chapters the real world examples of how Capitalism has worked across the whole worked in the last century or so. However, in a clever touch he selects pairs of countries that are obviously comparable where possible to show the distinction between the impacts on an economy of socilaist or capitalist policies.

Easy to understand and contrast examples include North and South Korea as well as West and East Germany. There is no need to hold back an the ample statistics show for themselves. East Germany lost nearly 1/3rd of it population escaping to the West during its short lifetime. North Korea became the unlovable basket case it is today whilst South Korea - with no natural resources bootstrapped itself to be better than many Western European countries.

Interestingly when discussin China's move to economic Capitalism and also South Korea's, there is plenty of room for adaptation and moderation. Korea had and has the Chaebol families and orgnisations, China the communist party and State Owned Enterprises. Nonetheless, by using the simple manta of free markets, low taxes where possible and reducing state interference in the economy the largest transformation ever in world history was completed. All without democracy impinging too much and I found it left me wanting to explore more about how the different approaches to capitalism would work out in the long-term. For many years, neoliberals have tied capitalism to democracy saying you need both to survive, but the world shows us there is little inherent link as long as the rule of law around private assets is maintained.

50% of people have been lifted out of extreme poverty in 50 years. The world has immeasurably improved where capitalist policies have been followed. The section on Africa, showing the dea hand of aid has likley held it back is also interesting, if less controversial than a few years ago.

The last chapters on why intellectuals always favour socialism (envy, for the mot part) is useful if not that helpful.

Overall all though, it is a superb read, easy to digest and full of uncontroversial statisctics that remind one of why capitalism is so succesful and why socialism is doomed to fail. There are other books that can get into the policital analysis of why Socialism or Capitalism appeals to human nature etc. For this book, it is more than enough just to historically explain the sucess of capitalism and why we must defend it and nuture it today.

I think the problem with one-party states is that corruption is worse than in democracies. Iran is an example.

It is the globalisation of technology, transport and communications that creates mobile networks in the favelas of Rio and the townships of South Africa. It is consumer capitalism that feeds their demand for cheap 3G phones. And it is globalism that drives manufacturing and commerce to nations in which the returns on investment are greatest - i.e. where the costs of labour, materials, energy and overheads are lowest.

Yes, here comes Branko Milanovic's Elephant. The wealth of the world's poor has been dramatically increased by the actions of these three forces, but our own developed nations have been wounded by it; in most of Europe, the median wage (adjusted for inflation) has not moved since the early part of this century, and in many nations is lower now than in 2008. The UK economy is exceptional - but 25% to 45% youth unemployment in large parts of Europe is the price we pay for the success of that triumverate.

If you're a supranationalist, committed to world government, open borders and rule by benign technocrats, you would count the last 50 years as success.

But many UK voters who have not gained will be, I suspect, less than enthusiastic. The party that develops an election narrative that supports capitalism but deprecates the effects of globalism will win many votes. Globalisation is not a policy issue - it is as inevitable as the Sun rising tomorrow.

The quid pro quo being cheaper baubles also coming in, this has mitigated the effects of increased inequality in enough of the population to not be a big enough issue. Yet.

I'm not convinced that reducing the effects of globalisation will be as large a vote winner as you fancy, as the improvements will be background, but the consequence will very much be in the foreground - which is generally where the vote winning takes place.

Telling Bob from Brum he's going to be paying more for his next phone, telly, etc. as friction has been introduced so that Rob from Redcar can now clean toilets for an extra pound an hour is unlikely to win his vote.

For the majority of the population that lack of median wage increase *has* been mitigated - that's why so many houses have washing machines, dishwashers, computers, mobile phones, 4k tellies, etc. It's why fast fashion is a thing. It' why people can go get a pile of clothes from Primark for significantly less than a trip to C&A 20 years ago.

There are kids wearing trainers that their parents would have had to shoplift in the 80's, now they get them on Amazon.

The two issues have been house prices, and the bottom end of the spectrum, where government has failed in its first duty of protecting its citizenry.

Is the book about Capitalism or free(ish) markets?
Far from the same thing?

PLUGGERS said...
This comment has been removed by a blog administrator.
12:52 am

The truth is that it should not be Capitalism at ALL costs. Certainly not at the cost of Nation where that Nation has been a good one to its people and a military bullwark against slavery, Communism and Nazism.

We now see Capitalism at work in the abolition of Britain by leading, left wing, hippy globalists. (Branson again.) And with it slavery is returned to Britain once more.

E-K - what do you mean by capitalism. personally the right to work and accumulate with little state interference and to keep the state small should always be pursued everywhere.

Yeah. Probably not using the word correctly, I agree with that sentiment too. I'm viewing globalism as a form of recently evolved capitalism.

Leading capitalists can be both leftist and revolutionary and very destructive.

Sorry, late to commenting on this one.

Any sane person would rather live in South Korea rather than North, but in South Korea the birthrate has dropped to 0.98 births/woman. Does that sound like a sustainable society? Not to mention the vast amount of human misery that is probably behind that statistic.

Thanks for sharing. Do check the latest internet offers by du home internet for speedy internet solutions in UAE.