The Chief Rabbi says it all for the ages

So of all the elections in my lifetime, this is one that has actually got to me the most.

The first election I can remember at all was in 1987 and it was an easy win for the best Prime Minister the country has had in recent decades.

In 1992, Major somehow won it from Welsh windbag Neil Kinnock, it was a little aggressive with Major being egged on his soapbox but was a good election to lose really with the Country stuck in recession.

In 1997 I was abroad and likely as naively excited as many were to see Tony Blair win, clearly a centrist and the Tory party was at a low ebb by then.

However by 2001 I was back in the Country and fearful of what Brown was starting to do with the finances and of the Pound being thrown away for the Euro. I campaigned quite hard for the Tories for the first time, little good did it do.

By 2005 it was an election like 1987 again, Blair was always going to romp home and duly did, likley the dullest election I can remember.

In 2010 the Financial crisis had changed the World and Gordon Brown was a terrible Prime Minister, yet the Tories were still so far behind they could not quite clinch it.

2015 was more of a surprise, a resurgent Labour and the toil that public finances had been through meant that it seemed Labour might make largest party and that at least the Lib Dems would be King makers again.

The unexpected 2017 election was a horrible time. May I knew was rubbish and had never wanted her in high office. Plus as a remainer in a brexit Country she struck the wrong tone. But up against her now was the lunatic Corbyn with a disgusting pro-terrorist record, friend of Russia and economic basket case. Surely she could beat him? But Labour were canny and started this free gifts of the young set of policies which really shored up their base. The disaster of the 2017 Hung parliament ensued.

And so here we are, another unexpected election in 2019. Te thing that actually scares me is the amount of people I meet and see now who will forgive Corbyn's antisemitism and pro-terror past in order to vote for him. Either because remaining in the EU is more important to them or because they have decided the free stuff offer is for them. Additionally, Boris has a history of lying and flip-flopping (that was the nice term we used to use, now political life is more visceral). but the really odd thing is that he is framed as a right wing extremist and accused of racism himself; as if he is a mirror of Corbyn. Of course, in reality the Tories are not centrist not right wing, as their manifesto shows. yet so hostile is the media and so effective the momentum minutes of hate campaign that there is much traction with this. The Chief Rabbi today has tried to call out the overt racism of Labour, but sadly this will fall on deaf ears, such has become the partisan nature of our political discourse.

So now we are left with just over 2 weeks to go until the polls, Labour are recovering, the Lib Dems smashed by their own revoke conceit. I doubt Corbyn will win or even be largest party but it is very possible nonetheless - and then what will we have done economically, morally and politically? Also can we recover, I hoped for a big loss for Corbyn to allow the centrist Labour party to seize back control, but it is gone now. We are to have a permanent itch for hyper-socialism in the country and that is a very sad political development as it enshrines division and hatred.

See how little has changed in their tactics in 100 years: 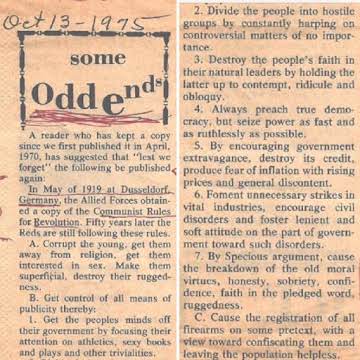 It not meant to be an election as such, it is meant to be a referendum with skin in the game this time. Politicians win or lose their seats on their Brexit position alone (either way) and we remove the deadlock in Parliament by getting a truer representation of the public on the EU inside Westminster.

Alas we've been side tracked.

To that cut-out list I'd add D) Control the language and therefore the very parameters of acceptable debate/options. (Political correctness)

Whoever did this has been very successful. We now have contempt for our politicians, judges, police, churches, courts... I'm almost at the point of begging the EU (Germans) to take us over.

The Chief Rabbi doesn't even speak for all British Jews, never mind the rest of us. Corbyn's foreign policy (don't invade/bomb random ME countries, don't train their terrorists) is about the least offensive part of his platform.

I find it most vexing that policy towards Israel is apparently something which can almost call up a veto on a British politician, and this is by no means confined to the PLP - we've seen quite recently the attempts by an Israeli agent, meeting with the aide to a Tory MP, to weaken the position of Alan Duncan, another guy who I cordially detest and who is relatively neutral vis a vis Israel/Palestine.

I think crying wolf like this is not helpful.

Excellent strapline as anyone who remembers the 70s as a person earning money will be born before 1960 and so is now about 60.

The thing you oldies forgot is to not vote for liars and charlatans. If you had followed that rule, it would not be Corbyn / Johnson / Swinson, it would be others.

Yes, Corbyn is a friend of terrorists who do not support the UK (at best), but out in the real world Con policies eat away at my sense of fairness.

Latest Example:
My sister works in a primary school in s. london - it is a mixed area some deprivation, some well off.
The new head wants to offer childcare. The govt funds 15 hours a week. If your household income is >min wage,less than 100k, you get 30h per week.

The thing is that the children that need this care the most are the ones where the household has little-no income.

The more well off will use the facility (the school is surrounded by nice houses) and then the children will go off to private schools.

Tricky, overcomplicated rules that just decrease faith in ... everything.

"Tricky, overcomplicated rules that just decrease faith in ... everything."

On the other hand if the household has little or no income, presumably the mother can care for her child herself - a radical idea, I know.

If the mother is so bad at her job that the child would be better off cared for by strangers, that raises much bigger questions about our dysgenic welfare system, and why our brightest women are being encouraged to have doctorates while our least bright were (at least up to 2015 and Cameron's two-child benefit cap, peace be upon it) encouraged to have babies.

Did you find Labour policies any better? Can't say I did. I was fooled by Blair in 97 and hated him by 2000. The good news is I haven't any illusions left - it's vote for the least worst.

Communism/socialism ALWAYS ends in blood and tears, it would be no different here.

Anon- I just so heartily disgaree, Corbyn is so happy to be seen alongside the likes of Hamas, the IRA, Chavez. It is a list of anyone anti-western, he even appeared on iranian press tv. he only ever calls our anti-semitism generally and is careful never to speak of the specifics of any case as well he knows which side he is really on. Then there are the dog whistles like pronouninc Epshtein last week instead of Epsteen. The man is sick and evil.

they guy hates the UK and the people here, he thinks outside his lefty tribe, the rest of us are ignorant psyhco's who willingly kill poor people for fun. He should look in the mirror, he is the one siding with evil people who hang gays and insist on whipping for being raped and we are the ones spreading democracy and capitalism to the benefit of all the world.

Howsoever that may be: I don't believe that cutting about the Communist rules. True in spirit, of course, but fake as a claimed fact, I suspect.

Dearieme - yes. I read it and wondered. Snopes has it as fake, though evidently someone went to some trouble to produce the newspaper clipping image. American-style cursive script, date format, though that "some Odd ends" header rings vague bells. As you say though, true in spirit.

"The thing you oldies forgot is to not vote for liars and charlatans."

And who was the biggest of the lot in recent times? Well it was Tony Blair and his dreadful wife. I despaired when he was elected. He pulled the wool over more or less everyone's eyes and we're still suffering the consequences with his acolytes in all parts of the establishment ie the BBC/universities/schools/civil service/House of Lords/HoC etc etc etc.

His warped thinking has poisoned the minds of the majority of the generation who love Jezza and Momentum but as CU says Jezza's not he cuddly grandfather they think he is. I would say Tony Blair lead the Labour Party to the cult of Jezza

David Cameron used UK tax money and the UK armed forces to fund, arm and train the most extreme Islamist head-choppers in Syria - literal terrorists. By comparison Corbyn's a piker.

I guess I'm old fashioned in that I put the benefit of the UK first. Benefiting all the world is a great idea but it comes very much second. The knee is nearer thabn the shin, as the Ancient Greeks put it.

CU: "I meet and see now who will forgive Corbyn's antisemitism and pro-terror past in order to vote for him. "

Corbyn isn't 'antisemitic', he probably doesn't care, he may be an anti Zionist. If the Labour party is antisemitic, it's because Tony Blair recruited five million voters from the Asian sub continent.