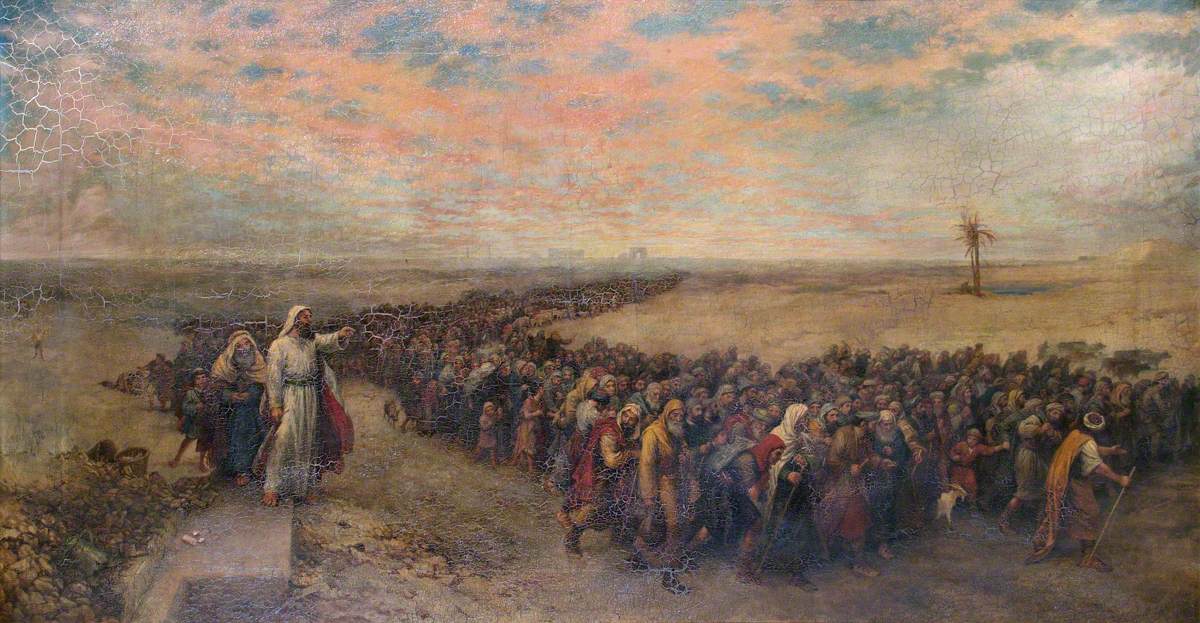 And so came the time of change upon the land.

Ravaged by plague and the mass of humanity seething in the Metropolis.

The welcome to strangers had pushed the sinews of London to breaking point.

Mayor Khan, for it were he, enjoyed his state patronage, but was happy to see the City fall to ruin assailed by vagabonds, for he did not like King Boris and was happy too see his realm fall into anarchy.

So eventually, they began to leave. The newcomes could have the anarchy, the Londoners wanted it no more. They wanted the promised land, the land of the shires, where there was not anarchy, where there were green fields instead of burning concrete buildings and where they could hope to escape the plague.

The Exodus had begun.

What's happening to prices within London, then? Are people bridging in order to make a swift escape?

I tell you, keep an eye on house sales at Auchencairn.

For the price of a midget London flat you could probably buy a decent house on the shore and a helicopter to get you there and back.

How far out does "the home counties" extend?

Just asking for a friend.

Nick - Hong Kongers filling the top of the jug apparently.

YDG - if we move to occasional commuting to London, we can add in a whole extra band of Counties.

Company I work for (medium sized, > £300M revenue) has all staff working from home. Most see it as a benefit and don't want to return to the office. Seems the only groups who do are:

1) Sales who need the interaction with customers to seal deals.
2) Young kids who work in the City office, socialise after work in bars/restaurants before going home to some crap overpriced bedsit.
3) Women in "soft" departments (HR, finance) who enjoy gossiping with their female colleagues. Likely have rug rats at home who are driving them mad.

Be interesting what impact 2) has on property prices. They'll be renting but if paying ~ £2k per month for a room in a shared house loses the allure and they give up on the Big Smoke those landlords might become distressed sellers depending on whether they are leveraged to the hilt for their rental property empire.

If I were running a white-collar office today (as I used to in times gone by) I would be pressing, "sensitively" but firmly, for a return to office working

(Of course, I'd also be pressing, very hard, for a rent reduction ...)

it has of course been easy for many firms to keep the show on the road WFH. But (not a blinding insight, this), that's been cantilevering out from a solid base of established relationships, built up over years of facetime - internal as well as customer-facing (i.e. not just Matt's 1 above)

any firm that subsides into permanent WFH will make (some) short-term savings, but will lose out longterm, same way as absentee landlords turn up one day to find the portfolio has crumbled

Matt's 3 above is an interesting one! Some shakeout overdue there

My nephew has had to stay on to do a Master's being unable to get work in the City as planned. He's wanted to be a Hedge Fund Manager since he was 7 (helicopter parents.)

There is no opportunity to win friends and influence people as a newbie on Zoom.

as you've prob gathered, I am a massive believer in facetime (in agreement bigtime with Raedwald on this, as it happens)

have written before abt how my father, in marketing for a big food co, always amazed his colleagues by constantly visiting the production facilities in person

brought up on this example I would frequently visit the oil refineries / gas processing plants / power stations etc that were at the core of my energy dealings (indeed, before Piper Alpha put paid to joyrides offshore, I'd visit the North sea platforms)

my HQ colleagues thought I was eccentric(a)(b). They didn't know what they were missing - the benefits to me personally (and, I'd strongly argue, the organisation generally) were immense

(a) so at first did the plant management - they were amazed. But we quickly made it work to both sides' benefit

I think the women in 3) are pretty safe. It's a tech company that is doing well during the pandemic and so can still maintain the overhead required to meet government diktats on diversity targets.

If you have way less than 10% female representation in engineering teams how do you balance your workforce?

Put them some place where in theory they can't do much harm! So, a continual stream of charity bake sales and coffee mornings looks like it isn't going away anytime soon 8-(

@ND if you mean going back into the office full time, then I can't agree.

There needs to be some office time, but having observed various offices, productivity-wise the UK pretty much does three day weeks, and I've seen that change for the better during lockdown.

All-hands meetings, which are more about the upper levels justifying their actions, once soaked up an entire a day a month at one client. Via Zoom people can still engage where needed, but get on with actually doing stuff.

Watercooler-chat, done over Slack, generally slows work, whereas in the office it stopped it.

Meetings now have to be planned, ad hoc ones at inappropriate times, to make some mid-level non-entity feel important, are massively reduced.

Add in the commute, and from a utility view that's 5-15 hours wasted.

Staff, on long term sick or maternity leave, can choose to still be engaged and still be an occasional resource, just don't take the piss.

But yes, face-to-face is important too - even companies I know that are 100% remote ensure that at least once a month there is a day where everyone is in an office, to maintain healthy communication if nothing else.

A roughly 50/50 split over the course of a month should, hopefully, provide the best of both worlds.

A wine company doing a refurb of their offices, looked over the one BQi has for rental, pre lockdown. Decided it wasn’t large enough.

Since lockdown, that same company have temp moved into a high street shop. About half the size of our office. And a quarter of their own.
They’ve so many working at home now, can fit Intto a shop the size of a Greggs.

That might be the future. Those shop rents are already on the floor.

you can identify the destructive effect on communications even with having staff on different floors (I was once in a firm that had more than one building in the same town - within trivial walking distance, but they may as well have been in different counties)

in dynamic, restless, creative business (the only kind I am interested in**) I have always found the Enron concept / practice of Connecting & Leveraging invaluable (= insistence on (a) proactive sharing of "ideas that work", and (b) proactively seeking others' input for helping with one's own challenges)

this only works when you are bumping into everyone all the time: the need to make appointments for that kind of creative interplay is a recipe for it not happening

ad hoc mentoring etc etc ain't gonna happen without high levels of facetime (it's not called "sitting next to Nellie" for nothing): 50:50 ain't enough

________
** perhaps for other working environments this is less relevant

Hm
My $employer has no intention of moving people back to work before 2021.
I think the large banks are targeting June 21.
Things will be different, you can run a meeting quite well and can run the business with existing relationships quite well.

It is not easy to establish relationships having never met but I am starting to understand some of the dynamics
My current recipe is have a chat before meeting with an existing contact in the room and get the new person joining in. After the meeting call and carry on talking.

I am in the process of bringing others 'up to speed' they have some domain knowledge but do not know this product or the clients. This will work out.

What I cannot see working is bringing in a new graduate from scratch.
There is too much to convey to make that work.
I have raised this but the drive is towards the office being a meeting room to be used 1-2 times a month.

@ND - sounds like you have an issue with the tools, rather than the process.

On Slack, I'm in constant communication with various grouped conversations where we can throw ideas around, jump on a call... The only thing I've yet to find a good replacement for is whiteboarding, which I'd prefer to be in the office for.

Although it could be a generational thing, a lot of people in their 20's are comfortable doing whiteboarding remotely, I'm not as such.

During the 90's/00's, I had much the same issue with resource split across floors, but it's been a non-issue for some years now.

And with mentoring, a lot of mine is with code, and I let them drive. If I see something awry I ask them to look at it, drop a few hints, and the smart ones pick up on it, or even argue if it's something more subjective, so maybe I'm biased there from a point of my speciality, but I've had no issues with that remote.

There's going to have to be some give though, companies wanting to attract the best talent are going to have suck up some flexibility, whether they like it or not.