Saddam in Kuwait, 30 Years On 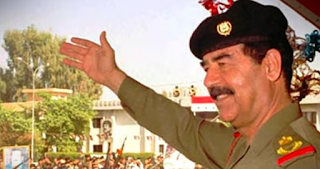 This month sees the 30th anniversary of Saddam Hussein's lightning invasion of Kuwait.  You won't find much mention of that in the MSM, but I haven't forgotten ...  and I'm rather hoping the 30-year rule will see a deluge of official material being released and declassified at Xmas.  Because unless that happens, I'm a bit limited in what I can write about it.**

Back then, it quickly became evident the US under Bush Senior was wholly determined to retake Kuwait, by force if necessary; and that the Brits would pitch in strongly  -  Mrs T, beleagured by the Poll Tax fiasco (Michael Portillo, where are you now?), was still PM and had long been looking to replicate the Falklands Factor.++

In 1990 I was a reservist.  The rules for mobilisation of reserves in those days were very restrictive (the later conflicts of the 1990s saw them greatly "relaxed", if that's the right word) - it could only be ordered if the UK itself or NATO was under a concrete military threat to its own territory.  However, I was a specialist and the rules had long since been waived for us, on a volunteer basis (I have no idea whether ministers had been informed ...).  And the cause was just.

Also, at the time I was working for a US oil company(!) who were, *ahem*, entirely supportive of releasing me for a while.  There was an immediate ramping-up of UK crisis plans, which called for the rapid build-up of various normally dormant HQ operations.  Partly this could be achieved by switching regular officers out of their peacetime roles: but it was also handy to have suitably qualified reservists available.  I had the experience - and a high security clearance.  So, back to the Colours I went ...   (TBC)

ND
____________
** The UK is considerably more paranoid conservative in these matters than the US - tons of juicy stuff has been declassified on their side if you know where to look:  but we're not allowed to confirm it

++ History Corner has another story to tell on that front ...

Always very interested to hear of your military career Nick!

Hope you are in good health.

Saddam Hussein.
My part in his downfall.

I still chuckle at the story you told me in the pub.

Nick, please continue the tales from your days serving the Colours. It's most enjoable when you invite the readers here to pull up a virtual sandbag and gather around the fire for your story.
TonyB

Gawd, Kev, which one was that? Did I stray into Classified territory??

When you were very junior rank. Assigned to a Captain (?) who had dirt on everyone and spoke to even the most senior ranks like they were shit.

It may have been classified but I don't think any names were mentioned but yours "Mr... from London."

I don't really understand this "classified" stuff. My memory is vague but I think I 'signed the Official Secrets Act' twice - or did I sign a promise that if asked to I would immediately sign the Act? Anyhow, it was all long ago and can't matter now.

The most secret-secret stuff I've ever dealt with was a pile of documents supplied by HMG on the Chernobyl reactor. I don't think I signed anything for that - it was all a tremendous rush and they wanted some useful critical comments PDQ. I obliged. It turned out that they had no plan to pay me for my expertise and insights, the bastards.

Maybe they thought "let's ask Dearieme - he can be a sharp bugger but he's got a lousy memory so he'll forget all about it pretty quickly". Which would have been a fair argument - the main thing I remember now is how well-informed HMG was about Soviet nuclear power. Though it did occur to me to wonder why they had to out-source their analysis to a couple of academics.

Ahah, yes Kev - back on the same wavelength. Different time, different place - maybe yet another post ...

You'd know if you'd ever been cleared for anything higher: believe me, you'd know

"You'd know if you'd ever been cleared for anything higher": hurray!

That means I was telling the truth when a policeman once asked me whether I was doing secret work for the government and I said ''no". But what other answer could anyone give anyway?