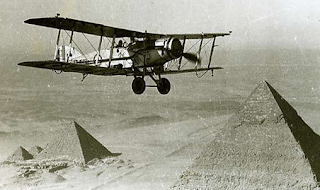 And so to our Colonialist Capitalist Quiz.  The amount charged by the RAF to the Egyptian government for the 3rd aerial survey in 1922 was £1,583 13s 5d.

So the winner is Sobers, with his very realistic stab.  A free lifetime subscription to C@W for that person - plus the first pint on me next time Blog Drinks are permitted.

Incidentally, if a little schoolboy humour is allowed while we are in robust retro mood  - you gotta admire the QC who told the court this week that the idea children can safely opt for puberty-blocking drugs is "a fairy tale" ...

Out of interest, what was the source of your information because I couldn't find anything by googling it?

it's not online. (I have access to docs that others don't.)

I demand a recount!

Woo hoo! I feel the prize follows in well worn footsteps, I am renowned for winning bottles of wine at raffles, the irony being I'm teetotal........

ND: I'm not sure the F-35 is the right comparison. What would the present day RAF use to do aerial reconnaissance over friendly territory? Probably the Shadow R1 (Beechcraft King Air). Or perhaps a Reaper drone. What's the cost of flying a Reaper for a day against a Bristol Fighter in the 1920s?

I would think the legal; profession is licking its lips and setting up its offshore bank accounts to deal with the onslaught of legal cases against the NHS and Mermaids as a result of this case. Mermaids are already being expunged from the public sector. My FoI request to the NHS on this matter now 30 days overdue for an answer, and I have put in a formal complaint to the Information Commissioner. Request below...

"1. Paperwork and documented reasons behind the mandating within the NHS of the use of the service of the charity, "Mermaids Gender".

2. Paperwork and documented reasons for the removal of all references to said charity from NHS websites.

"That’s why it’s significant that the website of Britain’s National Health Service (NHS)—the umbrella group for the country’s publicly-funded healthcare systems—has removed the prominent, once-numerous references to Mermaids from its online materials.""

I guess they need some time for shredding...

And whilst we are here, here's another to the ONS!

it says, in this publication.

The article also states that sex is "USUALLY generally male or female". Please list the other sexes.


That's easy. The individual, as a legal person in their own right, comes into being at birth. The midwife takes a look and assigns it to the legal category of male or female, as appropriate.

or, you might argue, a pre-existing satellite - probably commercial!

Amazing thing is, with google earth it's actually a free service these days, which makes for yet another type of thought-process

The BE2c was the RAF reconnaissance aircraft of the Great War. Designed in 1912 it was very useful for steady and slow photograph taking missions. Was the ideal mapper, being designed as a very stable aircraft. Other than that quality, it was awful. Just a terrible plane with dismal characteristics.

The Bristol Fighter, though an actual fighter, was designed in 1916, was a superb plane. So much do that it was still in front line service ( in quiet areas) in 1932. But as a reconnaissance aircraft. Mapping the desert, etc.

The BE2 was the subject of an actual inquiry into incompetence during the war, as it was so bad. And so many planes were lost.

The reality is, the BE2 was designed not long after a plane had first crossed the channel. And was designed without any thought of being involved in combat from other aircraft. It was easy to kill for even the most wretched of German fighters. It was a very good Aircraft for pre war.

The Bristol Fighter, despite its woeful introduction to service, had incorporated all the lessons of air war since 1914. And was able to be updated and upgraded to continue its service life.

Apparently there's a good aerial survey of (mainly) southern England in the early 1940s available. The photos are held in Washington DC.

Dearieme, there are several excellent DBs of aerial images

I was alluding to the Krauts' photos.

(and it was Keele, not Reading before the scotties got their hands on it)

Don't you need these aerial images if you are planning to carpet bomb a neighbouring country...perhaps there is more to this than you think.

I told you all so from the outset.

We've trashed the economy and are going to have to go for herd immunity anyway.

you can have free sub + beer too, Kev

always a pleasure, Kev. Sadly no west country trip this year, though we caught up with the Somerset tendency at a pub midway along the A303

Jesus, that Guardian article... it's coming to something when a QC describes not prescribing unnecessary life changing drugs at the age of 13 as "radical".