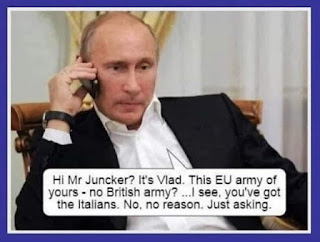 ... does the british army have the same capability level it did in the first gulf war?

Judging by recent MOD recruitment adverts the British Army should be best at compassion.

I also see that the gruelling Royal Marines PRMC entry tests have been pulled and are being revised. Hmm. I wonder why.

we cannot field an armoured division any longer

(on the plus side, we have one of the most battle-experienced armies, and airforces, in the world, tiny though they be: Cyprus and the intelligence capability is still there, with better kit. On a good day the Navy might show up with some cruise missiles. Or it might be in dock.)

BTW the Air Force is arguably better placed for an op of that type and magnitude (with superior recce and related capabilities, which the French rely on us to provide fraternally for them in Chad, for example), but only by throwing every single plane we have at it

"we cannot field an armoured division any longer"

I've seen a lot of videos in recent years of tanks being blown up by missiles. I think they may no longer be useful.

Hopefully the communications are a little better in the army these days. My son was in the TAs Signals in the 90s and they all used their mobile phones on exercises as the radio equipment wasn't as good.....

I have done the same, Jan

we were still using cable-bound field telephones into the late 70's!