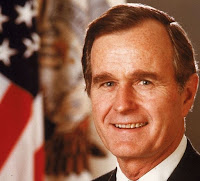 Reading a philosophy blog the other day, I found the following sentiment:  "George H. W. Bush was a temporary throwback to an earlier era of responsible conservatives".  Maybe not exactly how I'd have phrased it, but he was certainly the right man for the job in 1990, when Saddam Hussein made his land-grab for Kuwait.

Bush Snr was of course the consumate professional politician / administrator who'd done a string of top jobs before succeeding Ronald Reagan at the very top in 1989 - one helluva juncture in world history at which to take over.  I doubt if anyone would make a case for his having been a top-10 president overall: appointing Dan Quayle as VP, and losing (to Clinton) after one term, don't feel like qualifications for the shortlist.

But he had a couple of vital qualifications for the job in 1990: he'd been Ambassador to the UN; Director of the CIA; and he'd been on active combat service as a naval pilot in WW2 - 58 missions, DFC.  One way or the other, he'd learned some very significant lessons that were to prove extremely important for the conduct of the (First) Gulf War, both before and during the fighting.

The one that's relevant to our curent narrative on the build-up phase, 30 years ago today, is his enthusiam for building a substantial anti-Saddam coalition of nations.  We could all make the case as to why that would be a clever way to go, in terms of global politics - not least because, well, Middle East.  And then there was Russia, hovering to the north, with more than a passing interest in what was to transpire.

But it's not a no-brainer - particularly when his concept of the coalition extended to asking other countries to contribute troops on the ground.  Getting the UK onside was one thing - trusted ally, Security Council member, useful capabilities (Cyprus was vital, as we've discussed before; and all three services had plenty to offer in those days), on the same NATO doctrinal wavelength, part of the same intelligence community, fought alongside the USA in the Pacific theatre (inter alia) where Bush himself served.  But - as was later to be proved to be all too true - making use of, errr, Egyptian forces always seemed like a difficulty one could do without.

Still, Bush insisted on it, and there was a motley feel to the eventual lineup in the desert.  We'll maybe get to that next year, when the 30th anniversary of the actual fighting falls.  Apparently he very much whipped in this coalition himself, making many a 'phonecall to monarchs and presidents around the world, doubtless making good use of the contacts he'd made over the preceeding decades.  And a strikingly large number of nations joined the party  - Wiki lists 34 - with additional players like Germany and Japan contributing $$$, on top of the huge financial contribution made by Saudi Arabia for obvious reasons of self-interest.

Bush also had a fine team to execute his orders (this does not include Quayle).  James Baker was a competent Secretary of State.  Colin Powell, the Chairman of the Joint Chiefs of Staff, was and is very well-regarded.  And the appointment of General Norman Schwarzkopf to lead the mighty alliance on the ground was an excellent choice.

Next time:  the geo-political context.

Bush the Elder was the last non-adolescent Prez.

Can you imagine how Obama might have tackled it, or even if Obama would have tried to tackle it?

Surely he'd have felt the UN Resolution / Big Coalition approach was just fine? And all 1st-term Presidents want to show how tough they are - Reagan only invaded Grenada because of what the Falklands had done for Thatcher (to Thatcher's disgust, because she wanted to do it - another untold story ...)

and Obama did for Osama in his 1st term

Do I detect a book on the horizon? Saddam: My Part in his downfall.

Following on in the footsteps on other erudite historians.

Nothing surprising about Bush gathering a few mates to chuck Saddam out.

But what puzzles me is why did Saddam think attacking Kuwait would do him any good. He must have known he would incur the wrath of the US. The US did not seem to be giving 'take Kuwait' messages so what on earth made Saddam think he could get away with it. Bound to get his arse kicked and lose a lot of men and kit. Did not even make him look big to his neighbours - just a prat.

Bad timing, RayGun Ronnie had done just frightening the Ruskies with his 'space dominance' schtick and the US was on a military high just waiting to show a bit of power dressing. The Ruskies knew they were beat. Bad timing Saddam.

"The US did not seem to be giving 'take Kuwait' messages so what on earth made Saddam think he could get away with it."

But the story goes that the US Ambassador to Iraq gave SH the impression that if he attacked Kuwait the US would be indifferent to it.

Makes me wonder whether SH was deliberately lured into the invasion.

No one is ever lured into an invasion. There is no need. If the US wanted to fight Iraq, they would have fought Iraq. As occurred later on.
Iraq was the west’s sort of ally. The Iranians were the west’s enemy.

Wot dearieme said; plus it's geo-politics, Jim, but not as we know it.

Saddam didn't really think that the US would do anything directly; nobody did. The general pattern of the Cold War was that the two Powers went at it via proxies. The primary US ally in the area is Saudi Arabia - even though Iraq had been supported by the US/West against Iran (the Soviet's proxy of choice). What Saddam wanted to know was whether a move against Kuwait would bring Iraq into conflict with the Saudis, via the US.

The USSR was busy collapsing - so there was no other regional power likely to serve as effective opposition.

And there's always been some concern about how stable the House of Saud and it's control of the country actually is.

The aim of the Iraqis, and to a certain degree everyone else in the region, was to become that regional Power, supplanting the House of Saud. Given the Glaspie/State Department balls-up, Saddam thought he'd been given the green light to be that Power.