... and this one looks like a corker - a WW2 'Tallboy' bomb, recently detonated where it was dropped by the RAF near Szczecin in Poland. 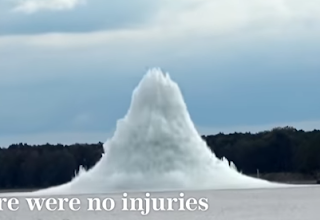 (Interesting how that plume of water describes what must be nearly a perfect Gaussian distribution:  anyone know the maths behind that?)

Szczecin (Stettin) is 600 miles as the crow flies - further from England than Berlin - and getting there in 1945 required overflight of a lot of German-controlled airspace.  To me, even more impressive than the bomber sorties were the pre- and post-bombing recce missions flown (to calibrate the damage with before-and-after photos).  Prior to introduction of the Mosquito, that meant an unarmed Spitfire with a solo pilot - doing all his own navigation.  Its theoretical maximum radius was 900 miles, but they'd never take the crows-flight course, and would generally photograph several targets in a single mission.  After a bombing run, the Germans knew the Spitfire would be coming along shortly ...

That takes a certain type of cool courage.

True dat. But it's not as terrifying as the footage of the one they had to detonate on a building site in Munich a few years ago.

It wasn't just combat, was it.

A friend/neighbour (sadly deceased) was a navigator on Mosquito night fighters protecting London. He explained dead reckoning and vectoring to me and how tricky it was after being thrown around after a dog fight. (I found it hard enough writing a log book in a speeding area car without throwing up.)

Slightly of topic - my brother was Met security at the Palaces of Westminster when engineers had phoned to say there was going to be a controlled explosion for underground tunnelling.

An hour later there was a huge bang and all the nick-nacks flew off the security hut shelves.

"What kind of controlled explosion was that ?" asked his mate.

By pure coincidence the IRA had set off a car bomb near Downing Street.

Just guessing, but I would imagine that the energy from the explosion propagates in an essentially spherical blast wave. As it interacts with the air/water interface you get the greatest energy directly in the center.

Kev, I'm quite sure I've told everyone before (at least once) how the most decorated WW2 vet I ever met was a pacifist, but willing to fly unarmed recce: he had every campaign medal from the European theatre 1939-45 (and a few more, to boot)

Sounds right, BiB. I'm guessing someone could do a simple proof, along the lines of how high-school physics can crack how simple harmonic motion works

(i.e. not in the Ito's lemma / rocket-science category of problem)

I had a quick search online about it after I wrote that and it's a surprisingly complex topic. There's the high pressure shockwave as you would expect, but there's also a gas bubble filled with superheated steam which expands and then implodes multiple times as it rises to the surface. I'm no expert, but I reckon that the complex fluid dynamics and various interactions would prove somewhat tricky to model accurately. But then, if they can model what happens in the nanoseconds after a nuclear detonation then modelling this should be a walk in the park.

Interesting, after all that complexity, that it resolves into such a basic (well, familar) distribution!

... though the formula for the Gaussian isn't exactly child's play

(that was A-level stats in my day: I could prove it once!)

"That takes a certain type of cool courage."

At the time, it would seem, almost standard issue.

Was it Stettin, or Swinwemunde? I guess Swinemunde is the port of Stettin. Both in Pomerania, of grenadier bones repute. Was German, now Polish.

G I Taylor was investigated by our spooks because he made a good estimate of the power of the first atom bomb from a photo of the mushroom cloud. The spooks though he must have been told by someone in the project.

Fermi calculated a rough estimate of the yield of the bomb in the Trinity test by dropping bits of paper throughout the detonation.
By watching how far they were displaced he was able to do a rough calculation of its power, even though he was some 10 miles away.

There is no way to get a Spitfire to Berlin from Kent, unless all armament is removed from the wings and replaced with fuel. Plus a drop tank sometimes. Plus an additional 20 gallon fuel tank under the seat to complement the two in front of the pilot. Then there is just enough space for the cameras.
Still a bit of a stretch for the high speed, short range, spitfire.

The P51 mustang managed it with ease. It carried almost twice as much fuel and had less drag. Remarkable planes, both.

Seeing that Nick it might be a good idea not to holiday on the Isle of Sheppey any time soon...

The SS Richard Montgomery could go up at any time, and take half of Kent with it as well!

I think I'll stay here, a little further south by fifty or so miles...

get a Spitfire to Berlin from Kent ... you also -

> refuelled it in Norfolk (slightly closer to target)

> "Cottonised" it (named after the amazing Sidney Cotton, see multiple online sources), which meant little bits of streamlining all over the plane, and a different type of paint. Cotton reckoned you could get 25 mph - and greater range - from almost any plane that way (he had to work with Blenheims, FFS, before they gave him a couple of Spits)

> oh yes, and removed the ballast from the tail!! (put there to counterbalance the more powerful (heavier) engines in later Spits

I don't think I would have fancied taking a drill to that thing, even a robot drill. Was the bang a surprise or intentional? Know nothing about disposal but a very quick charge to penetrate and disrupt the innards and spread them around before/just as they all went bang might be an idea. A bang was likely inevitable, better to try and minimise it.

Much gnashing of teeth beforehand re damage to windows and a bridge, did all that happen?

As for the bang, a (hemi)spherical ball of gas rising up might be compressed around its outer rim by surrounding water and tend to be squeezed toward the upper middle. Hence a bell curve - maybe. Impressive though, can we do it again please.

The BBC has a set of videos of the explosion.

there's a bit of disingenuity here: on the one hand, they reckoned just a small bang to defuse the thing

on the other, they had more camera angles ready than the average premiership goal gets ...

I believe the original intention was to defuse the thing by burning the explosive rather than detonating it. However such things are inherently risky and and an explosion was definitely a possibility. Hence why everyone was keeping their distance.

That isn't quite the story.

IIRC Cotton wanted two oblique angle cameras, but was told he could only have one because it would mess with the CoG too much.

He flew the first Spitfire in to have it's camera fitted. Had the engineering outfit test fly the aircraft after fitting, was told it was fine but it wouldn't have stood another camera - GofC would have been too far back, and wrecked the handling. At this point Cotton had the fitter open up the tail panel to reveal a lead weight equivalent to the effect of a second camera.

He got both cameras installed after this!

The Family Scrobs once had a very pleasant pint in the pub at Cotton End, by the huge airship hangars.

It was a peculiar experience, because I felt some sort of 'reverse vertigo', while watching a barrage balloon, tethered nearby and moving around, but of course, it might have been the ABV of the pint...

A good explosion is a fine thing.

I saw the Star Link pass over the other morning.