Centrica: as predicted, more assets on the block

Back to the day job, eh?   In September we wrote this: 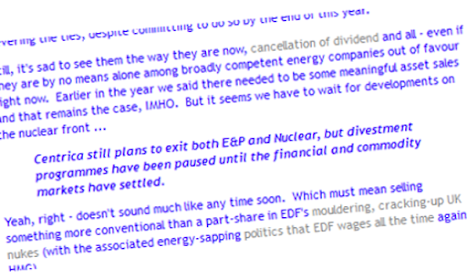 And so it comes to pass, according to the WSJ, which reports that Centrica has put its fair-sized global LNG portfolio on the block.  It further reckons that the company "may actually need to pay any potential buyer to take the LNG business off its hands, underscoring the uncertain outlook for gas prices internationally".

Oo-er.  That won't be what Centrica has in mind.  Can we form an independent view on the sales value?

Not readily.  Firstly, in its published reports Centrica wraps up LNG in the results of its trading division, a traditional smokescreen behind which all manner of things can easily be hidden.  Next, it only publishes sketchy info on the individual deals that comprise the portfolio (commercial confidentiality: fair enough).

Most importantly, however, Centrica very explicitly declines to offer a mark-to-market valuation for its big long-term LNG contracts (page 108 of the 2019 AR), of which it has several.  Its *reasoning* for this omission is that there are as yet no transparent long-term forward curves for global LNG.  That can be argued either way**, so their case can indeed be made.  BUT - the trouble is this excuse has frequently been used disingenuously, nay, culpably, by energy companies in a similar stew to skate lightly over eye-wateringly large negatives (in the billions, in some cases) that, although nobody could calibrate them accurately, are known by everyone in the industry to be very much on the red side of the ledger.  And here?  Who knows: I don't.  But it means that literally nowhere in the accounts does a full valuation lurk - even an estimate, even bundled with other stuff.  Institutional shareholders could easily take fright at that, when they consider what lay behind the scenes in other such cases in the past.

If prospective bidders all put a negative value on the LNG portfolio, I can't imagine a deal being struck.  But what other stand-alone assets does Centrica have to sell next?  And - are they due for a nasty downside surprise in the forthcoming Energy White Paper, which is set to pronounce on the fate of future UK large nukes, probably impacting on the value of Centrica's fateful 20% holding in EDF's UK nuke portfolio.  All rather uncomfortable.

** I'd argue that a pretty good forward value could be put on the LNG deals out three years.  Further, though I'm not an accountant, doesn't the conservatism principle require that forseeable losses should promptly be disclosed?

Couldn't a council take this wonderful asset off of Centrica's hands to provide an income to offset declining central government grants?

Nottingham City Concil are experts at energy trading ... no?

Maybe Bristol, then. Or Croydon, ND?

The technical and accounting is a bit beyond me, but do I gather you are implying something's wrong?

Anon@ 8:44 - first and most important of all we do not give investment advice etc etc.

Is something wrong at Centrica? I am very sure they have excellent accounting & legal advice and can amply justify their accounting judgement-calls. But if it was me, I'd be fairly confident that a meaningful mark-to-market value could be put on (most) long-term LNG deals over the period out to three years forward - and I'd want to know what it was. Beyond 3 years any valuation is genuinely more cloudy; and that, of course, impacts on a full valuation of a deal that extends beyond 3 years.

But we are left to guess because they've justfied to themselves not carrying out such an exercise (in public).

All I'm saying is, I can point to historical cases when similar reasoning and reluctance to quantify value, turned out to be cloaking some seriously out-of-the-money positions.

My general observation is: the standard of risk-transparency required in Annual Reports is a lot lower than at the time of a share offering. A prospectus usually comes with a seriously comprehensive set of risk disclosures. AR's much less so. If, for example, Centrica was floating shares in a division that contained their LNG portfolio as a major component, I believe they'd need to (and would) say a great deal more, certainly about the downside risks of their long term deals.

Do the auditors make any comment in their report? If there is a predicted downside, there really should be a provision in the income statement

They do also discuss how the impairments in the AR (particularly on the nukes) are subject to uncertainty surrounding price forecasts. But of course the LNG contracts are not being valued at all!

So there it is. I expect many of us could tell stories about the "discussions" they've had with auditors on issues of this kind. The run-up to every major corporate financial melt-down was attended by auditors who'd signed off on everything: only Arthur Andersen ever seems to have gone down with the ship (Enron)

BTW, in forming their view the auditors must presumably have reviewed the following Centrica statement ...

"there is currently no active market for LNG"

... which, in that unqualified form, is utter bollocks. If there were indeed no market, how the Hell do they think they are going to sell the portfolio for any serious amount of money??

That is certainly an unorthodox accounting approach to say that these assets should not be accounted for at fair value because there is no market! One wonders what the relevant regulatory body would have to say about this if it reviewed the case. The general principle is that the less reliable data you have on which to base a valuation, the more disclosure you need to make. If there is an impairment of value, it needs to be spelled out. This could move rapidly into squeaky bottom territory. Deloittes are already in trouble over Carillion etc.

Re auditors coming under fire, back in the mid 80s, we had the big 8. The mergers that brought it down to 4 were mostly caused by "controversial" audits leading to forced marriages. They were not generally friendly mergers.

Completely off topic wrt energy and LNG - however it fits in nicely with the theme of local authorities being a bunch of clowns.

TLDW: Licensing goons set up an entrapment to trick a bar manager into pouring a pint for take-a-way (just this once pretty please?) in-spite of bar manager insisting it has to be ordered in advance twice, before conceding as a favour.