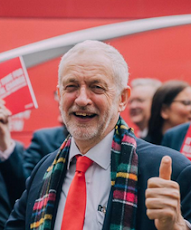 And so it rumbles on.  Everyone in Starmer vs Corbyn has doubled down, and there's no pretence that it's anything other than high-stakes posturing for positioning.  (One of Corbyn's outriders has kindly made the point explicit now.)

I don't detect anyone on the Left in Labour (with the possible exception of Paul Mason who, somewhat bizarrely, believes Starmer is his creation) who hasn't now essentially given up on their Leader.  For some, they'd barely ever given him a scintilla of benefit of the doubt; either itching for a pretext to go to war, or fully expecting something would lead to it anyway.  There were plenty more trying hard to believe Starmer's "continuity-corbyn" 10-point plan was genuine; but they must always have suspected and feared it was not.

All these People's Fronters and Popular Fronters hate each other so cordially, they'll be reaching for whatever weapons come to hand.  Starmer's crew are obviously tooled up with Party apparatus, which can appear to be overwhelming firepower.  But this is asymmetric warfare: B-52s vs the Viet Cong, who can disappear down tunnels and snipe lethally when targets of opportunity present themselves.

Here's the prediction.  Thus far, the Corbynite ranks have shown a fair amount of discipline (e.g. during the ill-fated 'negotiated corbo-climbdown' phase).  Some groupuscule on the Left will eventually decide to go nuclear.  What have they got?  Starmer's DPP / CPS past has been trawled over already, and maybe there's more to come; but I'd say there's something else.

Starmer is about to dragoon his MPs to vote for the Brexit deal, a prospect which many of them just hate.  He was Shadow Brexit Secretary.  He consorted with Barnier.  There will be something from those liaisons that will be deeply to his discredit.

UPDATE: this, from Paul Mason lui-même.  His creation is giving him concern.

But if they come out with what they think is a big "gotcha" while the rest of the country is focussed on the Brexit deal or no deal, Christmas, New Year celebrations and the imminent arrival of COVID vaccines, who is even going to notice?

Who will lead Labour at the next General Election?

If they'd any sense they'd invite Nigel Farage to do the job.

Cui bono. The Tory party has its roots in the old land owning aristocracy, big business and the middling merchant classes. Now evolved into a self perpetuating blob of media and jobs for the exalted.

Labour had its roots in the Unions, at least that is where the money comes from. But the concepts of socialism do not have much traction there. Getting a home and keeping fed are the main drivers. Only the middling class can afford concepts. A much weaker party lacking the big media guns, huge estates and places at Eton. But Labour has its own blob as well.

Which leaves the Corbynites with a problem, why should the Unions support and fund a whiskery old git offering Lenin caps and factory car park rallies. Useful to the idealists but not likely to butter any parsnips. Their other choice is Starmer, a bland and lightweight socialist but bendable.

Which begs the question - what is Labour for? Is it there to promote the UK's workers or is it there to keep their political blob in a job. Further, do the Unions see themselves as a blob enjoying the profits of their games. In this sense they in the same boat as the Tory backers and playing the same game.

So, Starmer or Corbyn, who is the better bet to counter the Tories and get the members a bit more loot (and more for the blob)? That depends a lot on the shape of their enemy and we won't see that evolve until the end of 2021 at least. So better to hedge ones bets and sit tight and keep Corbyn and Starmer in reserve.

Which brings me back to UK politics. We are stuck with a binary choice - except it is not really a choice. What we really get is one lousy bunch running things until the winds of reality run against them, then we get the other lousy bunch. Repeat ad nauseam.

Really, do read Isabel Hardman's "Why We Get The Wrong Politicians" and weep.

Any corporation that carried on like that would have the administrators called in. Perhaps that is where we are headed.


If brexit looks like it wont fail too much, starmer will dragoon troops to vote for it.

Otherwise (...events...) unlike the cons who are bound to the mast, he has a choice.

His only losing outcome is if brexit actually succeeds - and here is the joy of opposition. Starmer can choose his definition of success.

I look forwards to Starmer asking 'where is that 350m this week' every week in jan and feb.
As the economy is fully impacted by covid.

If the deal fails, I would expect him to abstain or make it a vote of conscience.
He can then ask where that 'easiest oven ready deal' is.

Every factory that closes (that exported to the EU at some point in the last 30 years)...
Yes, between somewhat and completely unfair but linking rising unemployment to the cons at a time when unemployment is v. likely to rise for a number of reasons is something an opposition should do.