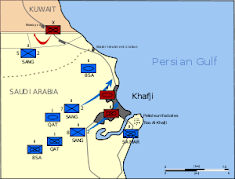 This is generally taken to be a memo item for commanders (particularly those many who are somewhat lacking in native creativity) to incorporate in their plans a carefully thought-through surprise for the enemy.  Just because it's clear to all that you are poised and ready to attack, doesn't mean you should simply blow the starting whistle and advance in a line on the obvious axis (think Normandy 1944).  It's all closely bound up with deception, another strongly advisable tool for every commander to pack in his kit - and much emphasised in British military doctrine, often to the bewilderment of more linearly-thinking allied leaders.

But it's also good advice for commanders who are themselves the ones mostly obviously holding the initiative on the battlefield.   Maybe the other side isn't going to take your next powerful move lying down: perhaps something really unexpected is going to come flying over the battlements in your direction.  No plan benefits from being thrown even a little off-balance before you've got properly started.

By the January of thirty years ago, it was pretty obvious to Saddam that he was about to face a formidable aerial bombardment.  Far from concealing it, Bush's coalition had been keen he should understand the sheer might of the aviation they possessed - not least to deter a further invasion, into Saudi Arabia, before coalition ground forces were ready.  Enough, you'd think (or indeed hope), to cow even a tooled-up maniac like Saddam, who'd had his share of setbacks against a much lesser foe in Iran.

But, just as we'd been surprised by some of the military innovations the Iraqis had come up with over the course of that earlier conflict, we had to cater for several initiatives we hadn't necessarily, errr, expected in detail...

We knew he had Scuds, including some with chemical warheads.  We'd deployed very advanced kit to detect their launches, and accurately predict their trajectories (all of which worked very well, incidentally).  We were searching diligently for the launchers as best we could, across the whole of Iraq.

What we hadn't banked on was an immediate Scud assault on Israel, as soon as we opened hostilities at the end of Desert Shield / start of Desert Storm, on 17th January 1991.

I mean: Saddam had seen the world's response to his attack on modest little Kuwait.  Who, in his shoes would choose to open a new front against Israel ?   But he did.  I'll be writing more about Scuds in future installments.

Yup, as Desert Storm commenced a large number of Iraqi planes headed immediately eastwards over the Iranian border, and landed there.  To be fair, this is nowadays mostly attributed to individual (albeit clearly pre-planned) defections rather than a cunning ploy to preserve the Iraqi airforce.  Still, it didn't half give us pause for thought.  In conjunction with the attack on Israel ... does he have an *understanding* with Iran ..?

3.  The attack on Khafji (Saudi Arabia)

Now this really is a classic.  The defender makes the first move, catching the attacker unawares.   As Wiki has it:

Yes, that was the point: still, in January, we weren't ready for ground fighting.  The aerial phase was always going to come first, but ideally we might have moved to ground ops rather sooner: as mentioned before, the logistical challenges were great, but the weather would soon be heavily against us.  The shelling was no great surprise, but Khafji was.  I leave you to refresh your memory on that episode on Wiki.

Gotta have realistic respect for the other side.  He was making a proper fight of it -  and not everyone thought he would.  Surprise, eh?  Catches you every time.

** not just military in its application, of course.  Just because I know I'm going to die, doesn't necessarily mean I won't be caught out when it actually happens

Was Saddam a maniac ? I always see him as a gangster, like Al Capone or Stalin.

It's sometimes said that (serious) criminals are very risk-averse: getting money is an important business, and they don't want to leave it to chance

First thought - the guy was a nutter. Looked into psycho profiles - probably post facto - which tells of a look tough guy. Conclusion was that he was not actually a nutter but an extreme case of strong family man.

Which leads to thought - keep your friends close and your enemies closer. Not so easy with Saddam, he would try the patience and courage of the best diplomats. Then who would think he was worth wasting much diplomatic personpower on. Good quality people would not want him on their portfolio hence Ms Glaspie got the job. Made a bit tricky by previous US support for Saddam on the Iran adventure.

Also very pally with the Ruskies who suppled arms and intelligence. But Saddam's political compass seemed rather narrow and he may have been if not egged on but not discouraged from a Kuwait adventure. My feeling is that he was left too isolated, the big swinging dick of the ME, and he thought he would try his luck. Badly informed, badly or malevolently advised, possibly enticed into a trap, he bit off more than he could chew.

Rather like having a large smelly unpleasant neighbour whom no one want to talks to - until one day he goes ape.

This is in the memoir of Saddam's doctor Ala Bashir.

Hussein's wife had a small growth on her arm, which she wanted to be removed. Bashir was so nervous that he forgot to give her the local anaesthetic. She sat through the procedure in silence, not complaining of the pain.

"Give your enemy a surprise."

A Hotel Chocolate 'H'box ? Perhaps a Sleekster if feeling generous ?

...I'm sure the SAS could have delivered Saddam a blanket turndown and a rose on the pillow.

(The Godfather horse's head moment but without the animal cruelty. Maybe war could have been averted by a Man from Milk Tray moment.)

Was it really impossible to settle the thing by his assassination? Offer a million bucks and US citizenship, for heaven's sake.

You may have got takers if it was norweigan citizenship...