Prince Philip - what a man 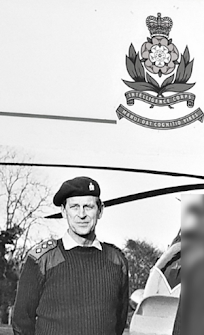 Sometimes there are people with apparently controversial sides who, when they depart, turn out to be universally loved (sometimes parochially, sometimes globally), greatly lamented and badly missed, the controversies completely brushed aside.  David Bowie, Peter Cook, Paul Foot ...  the list goes on, and evidently includes Prince Philip.

Since it is clearly shameless obituary name-dropping week, I will give you my personal micro-story.

Prince Philip was Colonel in Chief of my army corps, in which role I met him several times as any soldier does.  We commemorate a particular anniversary every 25 years and, supportive and active as ever, he presided over the celebration that fell in the 1990s, when he would have been in his 70s.  He congratulated us all on the foregoing quarter-century, wished us well for the next occasion 25 years hence, and concluded with the words: "... but I can tell you one thing - I shan't be there to celebrate it with you!".

@ when they depart, turn out to be universally loved

RIP the Duke, what a great and innings!

I have my own anecdote. I was 'on the rounds' (placement) as a probationary PC at Bishopsgate police station (City of London) when one morning I was put on Royalty duty outside the Mansion House - a low key event requiring a tepid body in No1 police uniform and white gloves to throw up a salute on the arrival of the DofE.

I was put on a separate radio channel to the normal one and told to await the announcement of 1 of 3 routes (A,B or C) - not even the local protection was to know which direction he was coming from as we were in the midst of an IRA terror campaign.

Route 'A' (Queen Victoria Street) was announced and there I was, looking in that direction like a Keystone Cop with his helmet tilted back, scratching my temple with a question mark above my head - the traffic hadn't gone quiet and there was no stately car.

I turn to see the DofE trotting into the Mansion House pointing at me with a big grin and a "Gotchya !" look on his face.

I got to speak to his security who were looking after his green electric van which he used to love driving around London incognito because - minus his hat - his camel hair coat made him look like a delivery driver.

He was much loved by the City Police and especially those who had served in the military.

Charismatic, handsome, kind, funny and interested and a man who would have gone to the very top of the navy without any doubt about it.

Love your anecdote Nick, but I have to confess E-K’s strikes a deeper chord!

Thank you gentlemen for your moving stories.

Philip: “Who are you?”
Simon Kelner: “I’m the editor-in-chief of The Independent, Sir.”
Philip: “What are you doing here?”
Kelner: “You invited me.”
Philip: “Well, you didn’t have to come!”

"In the event that I am reincarnated, I would like to return as a deadly virus, to contribute something to solving overpopulation."

"When a man opens the door of a car for a woman it is either a new car or a new woman."

Where do you get the idea from that Paul Foot was "universally beloved" ?

He was a nasty little Trot -- I once saw him in an Italian restaurant, hectoring his small bunch of followers and loudly ordering the waiters about. He was horrible to his two successive wives, whom he abandoned together with their children, and then shacked up with a third woman whom he never bothered to marry, although she also bore him a child. His ultra-leftist ideology was repulsive, and he toadied relentlessly to the IRA.

As for his "legacy", the Guardian newspaper (who else?) instigated a Paul Foot Award for Investigative Journalism, which must be the equivalent of a Harold Shipman Award for Geriatric Medicine.

Are you sure you didn't mean Michael Foot, the old Hampstead bibliophile?

Very sad. A shining example of his generation, which was an extraordinary one anyway. We are poorer without.

you can tell us about Bowie and Cook, too. But it turns out ...

And a fully paid up climate sceptic as well.

Me? I like ex Revolutionary Communist Tendency Marxist (and 100% Republican) Frank Furedi's "obit" of the great man.

"Even though I am not a royalist, I always admired Prince Philip, the Duke of Edinburgh. He was often criticised in the media for his many so-called gaffes. However, his formidable track record of saying unfashionable things in public can be taken as a positive testimony to his refusal to follow the rules of media training."


Are you sure you didn't mean Michael Foot, the old Hampstead bibliophile?

Who I did meet many years ago; mate was an specialist book seller (bought Karl Popper's library, for example). Held an opening party at his new offices in Bristol, and Michael Foot was there. Grabbed a quick minute with him in which we discussed football (Plymouth Argyle fan I recall!). A good man, hopelessly misguided.

I'd love to know what Prince Philip thought of lockdown.

And acceptor of Red gold.