Afghanistan and an important political principle 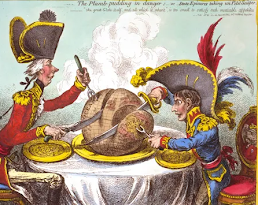 A principle in public affairs offered here several times before is that lines of logistics in politics can be very short  (Drew's Fourth Law of Politics).  Deals of enormous importance can be struck in a trice and sometimes delivered almost as quickly: think the Tory-DUP pact after May's disastrous GE 2017.  This is especially true of foreign affairs.  Unlike many domestic spheres when delivery on a policy can take years, a treaty can be signed and often executed in a flash: think Treaty of Paris 1763, which re-drew the map of the world.

So when the Americans and *ahem* their allies slunk away from Afghanistan last week, what did anybody expect?  That people would sit back and watch the Taliban slowly roll up the map, like the North Vietnamese in 1975?  The Afghans are - of course - in discussions with a range of possible "new friends" and something quite radical is likely to happen in that geography very soon.  Stroke of a pen.  Overnight.  Only limitation is the imagination of those concerned.

The USA, though often more inclined to rely upon overall might than ingenious diplomacy, was nonetheless once quite adept at this stuff in its own way.  What a senile prat Biden is.  How much more of the world is he going to allow to be carved up over the dinner table - by other people?

The American Tech giants have a lot to answer for. I am sure they have sealed deals with whoever is really running the USA. BUt Biden is something out of a dystopian nightmare. Let’s hope his handlers have stopped him having access to the Big Red Button. Otherwise, in the words of Fraser from Dad’s Army, we are all doomed!

Amir Taheri's piece on this topic is worth reading.

The link is supposed to have some stuff on the end:

Does anyone else miss Trump yet?

If ever one needed one example that we do not learn from history ... I give you Afghanistan.

We're like mortgage defaulters posting the keys through the letter box.

To be continued, as they say.

This thing isn't going away. Coming to a street near you (after a short trip in a RIB - I've cancelled my donations to the RNLI, having already ditched the National Trust.)

Unfortunately we owe the Afghan and Iraqi refugees big time.

Our governments have repeatedly acted against the express wishes of the people and the results have been disastrous.

... and China is about to reap any benefits.

And china are about to reap the benefits.

I put it to the floor that these things are an inevitable effect of the two different models of governance.

In the west we are led by elected politicians who need to be re-elected every 5 years or so. They are supported by advisors,experts and civil service (deep state) but the politician makes the decisions. Indeed trump announcing the us exit from Afghanistan and then trying to negotiate with the taliban is reminiscent of browns gold bottom. Both ideas that might have been good but were executed really badly.

The chinese do not have a regular electoral cycle or have to appeal to an electorate directly and regularly. They have the capacity to absorb losses at a larger level and for longer than a western democracy.
Timing is in their elite's hands.
Those in power _are_ their country's deep state and so they have the institutional memory.

They have a timing and institutional memory advantage.

Our advantage is (in europe and n america) property and ip rights, rule of law and that if our leaders go wrong we replace them (though none of those are guaranteed)

All we have to do is wait for them to fail faster than us.

China should send an army of Uighurs to invade Afghanistan, as Moslem Brothers. That would go down well.

But is there much there that anyone would want? In ancient times it produced tin and lapis lazuli: now?

Have the Afghans learned anything from history ? "How to win a war against a stronger opponent" is worth learning.

As did we in Victorian times, sliced to bits in fact.

20 years and a reported $2.2 trillion later, something needed to be done with the quagmire that is Afghanistan.
Serious question - what should the West be doing with Afghanistan?