Afghanistan: why history is really important

When you're wounded and left on Afghanistan's plains
And the women come out to cut up what remains
Jest roll to your rifle and blow out your brains ... 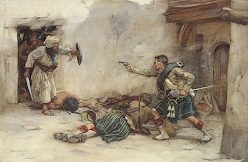 When we last briefly looked at this, Don Cox BTL offered a link to a piece that suggested the Afghans would surprise us all in combatting the Taliban effectively  (Taliban on the Way to Kabul? Not so Fast…)  Hmmm.  Looks more like a re-run of Vietnam on fast-forward; quicker even than the major ISIS surge in Iraq before external parties intervened.

There's an excellent book, Afghantsy, on the Russian's decade of direct intervention in that benighted land 1979-89 by Rodric Braithwaite, a former UK ambassador to Moscow who (though not a military expert) seriously knows his stuff.   Even the Russians - a bordering nation, prepared to commit a large number of boots on the ground and be quite brutal themselves - couldn't achieve anything, as Braithwaite recounts.   Obviously, we couldn't either - in the 19th century or the 21st.

The book's early chapters cover two centuries of relevant history very well: history that anyone proposing to get involved should have acquainted themselves with before making any decisions at all.  The uncompromising facts about this brutal land and its endlessly turbulent, factional and belligerent people make one wonder if anyone thus historically equipped, Russian or in turn American, would ever have committed their infantry to the place.  Blair?  Just tagging along, as ever.  Which brings us back to the Americans ...

Biden's irresponsible closing contribution on this has been extraordinary - the TV clip being shown yesterday surely confirms him as utterly senile.  He seems capable of dropping any ball and the world once again depends desperately upon the 'checks and balances' of the American system - much under strain during the Trump regime, and to be sorely tested now, it seems.  With its more-or-less unilateral command of US foreign policy (where political 'lines of logistics' are shortest), I ask again: what other half-baked nonsense will the White House perpetrate?

A cynic might say that Biden's actions are completely rational. Why finance State-hollowing corruption in Afghanistan when the US domestic need for the same is so pressing?

Before he became a sneering, patronising gimp during Brexit (and subsequently eyeing London Mayor role) Rory Stewart wrote an excellent book called The Places in Between. It is impossible to read that book and imagine that any modern foreign force would succeed in controlling the country.

Anyone got a link to the Biden TV clip?

I dread to think what Big Tech got from the Democrats in return for getting Dopey Joe elected. I hope they were assured he'd forgotten where the Big Red Button is...

'Two thousand pounds of education
Drops to a ten-rupee jezzail'

Plenty of good Kipling quotes available. Also Churchill, in The Story of the Malakand Field Force. I agree about the excellent Braithwaite book on the Russian experience. John Masters in Bugles and a Tiger is also very good on the reality of pre-war soldiering in NWFP / Afghanistan.

I haven't seen the Biden clip, but there's clearly nothing to be gained by the US/NATO in staying in Afghanistan. Better to clear out now, however humiliating, and let the Taliban get on with it.

Perhaps the Chinese government would like to have a go.

So far, so predictable. If I were being shoved off to Kabul I might ponder on how long it will take for the locals to crater the runway. I would hope before I get there.... Anyway, all an embarrassing sideshow before the main events - the resurrection of Trump and 2024.

The next couple of years may be interesting. As suggested, Biden is probably not up to it - is Karmala any better. Because he is too old, not because he is a Democrat - but. Plainly some would like to see the Republicans back in and some still love Trump. And there he is, like the Taliban, well equipped and well funded, just waiting to roll back into town.

Always been an interesting symmetry between Afghanistan and the US politics wise. Religious enthusiasm, deep corruption, deep divisions in society, no settled answers. They kind of deserve each other.

Jim, that is a genuinely provocative insight!

You can see why (as is rumoured) Xi hits the monkey glands so heavily. He thinks he just has to live long enough ...

Has anyone worked out why the Dems knifed the odious Cuomo? Whose way was being cleared? Caramel Harlot's?

According to Bob Woodward's Obama's Wars book Biden was strongly against a deeper Afghanistan engagement in 2009, and presumably for a slow drawdown and hopefully transition to Afghan forces, when Obama came to power. So he is finally getting his way with Trump having provided the political cover for the move.

To my mind Biden was the astute one way back then and many of the U.S. Generals the idiots. The UK was basically on the pillion-seat.

The way the book tells it the Generals were dead set against admitting any kind of perceived defeat in 2009, and heavily briefed/leaked to the media against the drawdown approach Biden and Obama wanted, winning over enough in the Senate to make a drawdown politically impossible. So Obama went with the 2009/10 surge so the Generals could demonstrate they were correct that they could win a counter-insurgency war. Which slid into the mire.

Why would any general desire to commit front line, nation to nation forces, to an ongoing, religious, drug fuelled, tribal, insurgency conflict?
Especially the USA. With its previous Korean and Vietnamese experience.

It would be like the UK armed forces saying they want a surge in Northern Ireland, to defeat the IRA. Using tanks and missiles and fast jets to bomb the IRA to the peace table.

"I dread to think what Big Tech got from the Democrats"

Some of the Big Tech companies have reached such a level of dominance in their sectors that they must be deeply concerned about the risk of anti-trust actions by the US government. Standard Oil and the Bell Telephone Company once dominated their industries in a similar way and they were forcibly broken up.

One way to avoid this fate is make themselves so useful to the political establishment that it will want Big Tech to remain as big and powerful as possible. The way to do that is to become information gatekeepers for the establishment, suppressing any news and opinions that the establishment finds inconvenient and doing everything possible to obstruct political insurgents like Donald Trump.

No doubt there is a lot of genuine hostility to Trump among the tech oligarchs and their college-indoctrinated employees, but in the end it's the bottom line that really matters.

"for an Afghan tribesman the greatest delight is to hide silent in a thicket for 3 days, then creep silently out like a serpent and cut the throat of his enemy". Just a tiny slice of their history.

After 9/11 some reprisals were called for. Perhaps flatten Kabul, or some $10,000 bombs on a mud hut and 2 goats. Poor publicity and poor economics. So a spot of peacekeeping. Snag, the US Army does warfighting not peacekeeping - a fundamental defect making it a not-very-useful tool. Soldiers on the ground will be like frightened rabbits, no language, no cultural connection, a disaster waiting. A nuke then, just a little one - not a good look.

Realistically a quick visit, break some furniture and get out (without OBL) was the only sane option. Pick off OBL later. That would have looked proportional and have some honour from a fighter's perspective. On top of that it might have been possible to build some sort of change. Might.

Jim - "Always been an interesting symmetry between Afghanistan and the US politics wise. Religious enthusiasm, deep corruption, deep divisions in society, no settled answers. They kind of deserve each other."

And now the Democrats are into smashing historical statues, mandatory face covering for BOTH sexes, and mutilating children's genitals. More convergence than symmetry.

I see Rory Stewart is all over the place with his "Great Betrayal" hysteria. He wrote this in 2009. What have they been doping him with since?

The new UK strategy for Afghanistan is described as: “International… regional… joint civilian-military… co-ordinated… long-term…focused on developing capacity… an approach that combines respect for sovereignty and local values with respect for international standards of democracy, legitimate and accountable government, and human rights; a hard-headed approach: setting clear and realistic objectives with clear metrics of success.”

This is not a plan: it is a description of what we have not got. Why do we believe that describing what we do not have should constitute a plan on how to get it? In part, it is because the language is comfortingly opaque. A bewildering range of different logical connections and identities can be concealed in a specialised language derived from development theory and overlaid with management consultancy. What is concealed is our underlying assumption that when we want to make other societies resemble our (often fantastical) ideas of our own society, we can.

A lot of historical nonsense is being written about Britain's previous Imperial involvement with Afghanistan. In fact, all three Afghan Wars ended with Britain gaining her war aims, which were never to occupy the country, much less to incorporate it into the Empire, but rather to prevent their rulers allowing the Russians to use it as a corridor to invade British India.
The First Afghan War (1843) began with the disaster of the retreat from Kabul. This was brought about by the appalling generalship of Lord Elphinstone, and by the fact that Calcutta, in order to save money, had terminated the subsidies (or bribes) paid to the tribes bordering the Khyber Pass to keep the way open. An entire army of 4,500 men, plus 13,000 camp followers, were annihilate. Nine months later, General Pollock led an Army of Retribution up the Khyber to Kabul, blew up the city's bazaar and public buildings, and carried out punitive reprisals. The British then restored Dost Mohammed, the former Amir who had been deposed and exiled in India, back to power. ("I do not understand", he said.) The condition was that he kept the Russians out, and did not intervene in India -- a condition which he observed, even during the Indian Mutiny when Britain was at its most vulnerable..
The Second Afghan War (1878) began with two disasters -- the fall of the British Residency in Kabul, and the catastrophic British defeat at Maiwand. ("My God, Maiwand!" one of the few survivors recalled.) Lord Roberts then led his troops on the epic march from Kabul to Kandahar, and totally destroyed the Afghan field army outside the walls of the city.
The Third Afghan War (1919) was largely fought by the British using air-power. The threat then was no longer from Russian Tsarist expansion, but rather from Russian Bolsheviks potentially moving in to attack India. The result was as with the two previous wars,but without the initial disasters.
In short, the British ultimately dealt successfully with the potential threat from, or through, Afghanistan. The modern day threat is from Islamic extremism, and is aimed at the West in general. Perhaps we could learn more from factual history, rather than false-based defeatism.