While we wait for Putin ... here's some meerkats 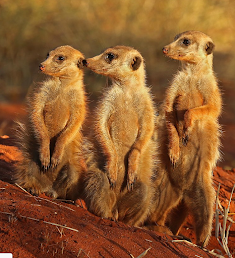 I've long been quite surprised that the market has sustained so many price comparison sites.   Presumably, the software is relatively simple, the overheads are low and their biggest cost is massive prime-time TV advertising campaigns.  It seems to be as competitive as an industry ever gets - ironic, when at the start of energy-price comparisons we notoriously only had the 'Big 6' of actual energy suppliers.  Right now, unsurprisingly in view of the UK energy pricing debacle, they're in trouble.

You'll have read it here; but I don't recall ever seeing in the MSM recognition of the baleful impact the auto-switchers or 'flippers' had on the health of the energy supply market itself.  It was once impossible for small new entrants to access this market - and quite right too: why should the barriers to entry in a sector like this be low?  But a number of factors conspired to turn this situation utterly on its head, so that any two-bit rogue could play - and play with other people's money, too.  High on the list of new factors was the 'flipper':  all you had to do was register with the site, ensure your price was the lowest for a short while (or, with the less scrupulous ones, cross the flipper's palm with silver for 'special favours'), and be sent as many customers as you wanted.  Simples, eh, Sergei?

And play they did - for a while, until the tide inevitably went out and their lack of swimwear was revealed.  Meanwhile, many a rogue syphoned off a chunk of the free working capital that the energy 'market' gifts to end-game suppliers in the form of pre-payments, and green levies collected but not paid over.  As well as genuine profits in the early stages of this game when prices were falling and they could play the Northern Rock tactic of sell long, buy short - without needing much by way of credit-lines.  Yes, of course it was unsustainable.

The outcome is costing us £ billions to unwind, even though Ofgem's SOLR mechanisms mean no customer loses their supply in the process.  It has also brought the game into fundamental disrepute.  Ofgem is generally quite a good regulator but they screwed this one up royally.  Thanks, Sergei and that Welsh git.

weren't we supposed to be looking at an Ukrainian Armageddon today ?

Weather around Kiev looks good all week. Good for invasion. Good for air.

At least the meerkats and the opera singer have brought us far superior ads to the usual glum fare.

I suppose it's about time the opera singer is replaced by a mulatto trannie singing hip hop.

Boris has said the invasion has already started.

I recall someone on the comments writing C@W had discovered a favourite word and were determined to use it in all circumstances.

That word was maskirovka.

And the rebuttal that the Russians have a doctrine for deception. Not just like those successful successful deceptions the Allies duped the Axis with. Man who never was. Invasion of Pas de Calais by Payton’s super army, etc. But even deeper than that.

“Strategic maskirovka is carried out at national and theater levels to mislead the enemy as to political and military capabilities, intentions and timing of actions. In these spheres, as war is but an extension of politics,[a] it includes political, economic and diplomatic measures as well as military.”

A good example, mentioned before, but still, General George McClellan of the Union forces during the civil war.
Outnumbered his enemies usually 1.75-2.5 times. Vastly superior in equipment of all kinds. In reserves. In naval capacity, twenty times the capacity.
All the way down the lists for war making, he was ahead, in every category.
And he was good. He wasn’t a noob, or a political appointment. He was a skilled general officer at a time when plenty of others were not.

But when it came to fighting he never managed to lose his fear he would be ambushed by superior numbers.
Even when he discovered the ( genuine) orders of his opponent and realised he could crush those divided forces with ease, he did not. Even kn the battlefield, looking through his spyglasses at one third his own numbers, he hesitated.

His enemy was in his head. George believed every report he received that warned him of disaster. And discounted any that could mean success.
The armies of phantom rebels haunted his decisions. And eventually he was replaced.

Imagine if Abraham Lincoln had also been so influenced?

The 21st has dawned and begins to grow old and still we wait...
I'm totally 50/50 on will he won't he but CU (and other commenters) made such a convincing argument for this date that I moved 30% of my share holding into cash last week (its not a fortune) but here I am poised to get back in at lower costs and Putin of all people is spoiling my day!

Ah well, haven't lost anything by it except trading costs.

Let's see what tomorrow brings, maybe he's waiting for a call from Xi :)

Basically I've found energy swapping irritating. It made profit on screwing people who don't do it and here we are... tide out and shrivelled penises and retracted nut sacks all round.

I need a wind turbine to stand behind to preserve my modesty.

"I think the end-game is starting to come clear.

Once passed the Russian army will roll in and move up to their new border.

There will be some fighting, but not much.

Lots of diplomatic grumpiness.
And that is it."

do I get a prize?

I think you are missing the value that compare the market brings. It maintains a customer database that it maps to the different products that it compares, and evolves the database over time ( e.g updating my no claims bonus, previous claims, points (and when they are spent), size and value of house and contents.
The policy is with an insurance company, the customer relationship is with compare the market.
I use it every year and it's about the same difficulty as a renewal - I never bother with the free toy/cinema tickets. The value is in the time it saves you.
Al

Mail : "U.S. intelligence has warned for weeks that this would be the way Putin would go about trying to disguise his invasion of Ukraine."

Really? First I've heard of it. I thought it would be false flag rocket attacks, that's what Boris said.

I guess the mutual defence treaties will be signed any minute now.

I was wondering if Kosovo would be the precedent, but in that case NATO forces bombed Serbia in support of the Kosovo Liberation Army without any UN mandate - it was a pure display of "might is right". It was only after Serb forces withdrew from Kosovo (after being attacked by NATO) that Kosovo declared independence. Still not recognised by Serbia, Russia or China.

So the rebels in the Donbass and Luhansk have greater moral authority for independence than the Kosovars ever did. They didn't get their territory by calling in a much superior foreign air force.

What I would be interested to know is - what are the borders of these new nations? Do they correspond with the facts on the ground?

The 21st has dawned and begins to grow old...

If China moves on Taiwan it would be a major shifting of tectonic plates, but were I President Xi I think I'd just let the US keep on declining in their own good time. Why ruin a good thing? Another 15 years and China will make everything and the US nothing.

"Goodnight, all. Mind how you go."

Putin to be prosecuted under "article 110 of Ukraine’s criminal code. It forbids deliberate calls to change Ukraine’s borders."

Imagine if we had such a code! All SNP/Sinn Fein/Plaid people and voters rounded up ... the Guardian would go crackers.