To lighten the mood ... an FX story

I return early from a very pressured business week, with doom & gloom all around ... but contemplating a spot of gardening I was reminded of this cheery tale ...

A good few years ago, I was entertaining an excellent US business partner and friend at Schloss Drew for a weekend, as part of which I took him for a hike around some local hills where, inter alia, there's a fine viewpoint looking out across South London**.  Also a good restaurant; and finally, a rather quirky local geological feature.  If you know what you're looking for, on the heathland you can find pairs of largish pebbles that, when cupped in either hand and smashed sharply together, shatter to reveal often-beautiful patterns within the stone.  (I understand this to be a moraine phenomenon.)  Of course if you aren't wearing gloves you also often cut yourself, but hey, who's the wimp? 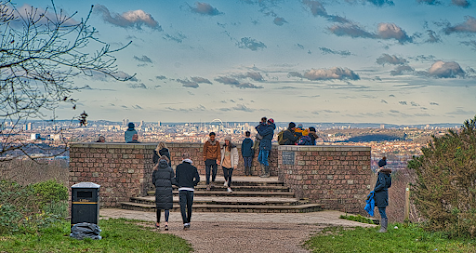 I showed him this, and he was entranced.  He asked me to select him a couple, and successfully tried it himself.

Being an earnest fellow, he then asked if I could select him four more pebbles, and whether it would be alright to take them back to the USA to give his two boys?  I told him that I didn't know of any relevant export restrictions, provided of course that he didn't fear anything adverse at the hands of the notoriously humorless US Homeland officials.  He thought he'd be OK on that score, and departed rejoicing with his four "rocks" (in US parlance).

A few weeks later we met again, and he solemnly gave me two silver dollars for my two children, "in return for the rocks".   I couldn't forbear to remark that, at that FX rate, I could suggest, errr, another transaction or two ...

Stay away from the MSM, and have a nice weekend!

** quiet at the back there: enough of your sarcastic cries of why? !

2 silver dollars - I have two one dollar bills that proclaim themselves to be "Silver Certificates" found inside something I bought at a car boot sale.

Still legal tender apparently but not redeemable for actual silver. Last issued in 1964.

I know London very little but I do know there's a good view from Nunhead cemetery. So there!

Sold all my silver dollars on Ebay - got about £30.00 each for them at the time when Brown was trashing the economy, so I thought I'd do the same as well!

Paid the mortgage that month too!

I met the prospective daughter in-law's parents at the graduation. (Second time)

They are Indian and he was telling me about how his father took in stray dogs (he only had one at a time and they were never put on a lead.)

He told me every one of the dogs was called "Lucky"

I asked why. He said "Until they got run over and killed by a passing truck they were always called Lucky." he'd then beckon over a new stray dog and call it Lucky and keep it as a pet for as long as it lasted.

Those pebbles are interesting. Do they have a name ? I would like to find out more about them.

Dunno, Don - I'll fetch a few & do another (illustrated) post on them

Two silver dollars for your kids? Does he want mine, too? :)

Bleednell, FT - where you bin?