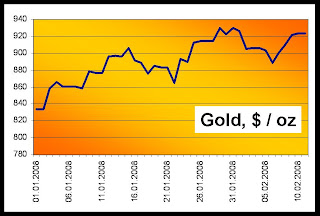 At the end of December, C@W made our annual predictions for 2008. One has already transpired - that oil would briefly reach $ 100 - but to be honest it was a bit of a no-brainer.

Sticking our necks out still further, we forecast that sub-prime write-offs would hit $ 500 billion. At the time, the banks were only admitting to less than one fifth of that, but the latest estimates have now reached 80% of our predicted amount. Pity no-one was opening a spread-bet book on that (though you can always short the banks ...)

What of the others ? There were 20 sooth-sayings in all, and several more look to be in good shape. Barak Obama is making headway: Sterling, house prices and the FTSE are all on their way to the pit (Heaven help us all). And of course Northern Crock is still set fair for full nationalisation. We'll revisit these and the others periodically.

Any danger of us getting a bit smug here at C@W ? No chance: you won't see much smirking here while augury #3 remains good - Brown to remain PM ...

GB has a full 14 feet of statistics to refer to on wednesday to prove that everything is fine and has been getting ever better since 1997.

Expect him to reel off all of them.

Mr Quango - yes, it'll be that rather than Income Tax

oh yes, and Crime is Down, as we must repeat on all occasions

Mark - a bit like that, calibrated by a longstanding rule-of-thumb of mine (based on solid experience) that the scale of a Really Bad Thing is generally a significant multiple of what is initially admitted: no-one can believe it's possible, but it is ...

Very interesting at our office lunch today, someone mentioned Branson and when I started ranting about how he would take the upside but would walk away if it went wrong, nearly everyone round the table (not a bunch of financial wizards) was nodding sagely. I think people out there understand what is happening and are not happy.

Might this be the very heavy straw that finally breaks Brown's "competence" cloak?

On another matter, Nick, can you ask CUS to e-mail me because his old mail doesn't work and one of our conservative colleagues wold like to contact him.

Ed - passing swiftly over the fine mixed metaphor, yes I do wonder whether there is anyone left now who doesn't see through Brown

James - will pass on your msg

cash or gold or ... ? These are my brief thoughts (but not, of course, advice)

Cash - the archetypal risk-free asset in formal risk-management terms, EXCEPT that (a) these days you need to think carefully about exactly where you hold it, an apalling state of affairs; and (b) it is subject to inflation

(on both counts, this is why, personally, I like NS&I's indexed-linked tax-free bonds)

Gold - has only been on my radar screen in the last 9 months. Seems to me (and I've been watching closely) it is a hedge against Bad News, rather than against inflation: and it doesn't seem to be just another commodity, even though it has shown a modest correlation with (e.g.) non-precious metals over the recent medium term

Some folk see gold as a hedge against Bad Money

Commodities - have all surged over the last few years, driven by demand, no mystery. In the long run that demand is surely set to continue for a long time as China and India develop: but my view for the short and medium term is that there could be a significant downturn in demand - a massive blip in the mega-trend, the effect of which could be quite extreme - hence my prediction that oil, having touched $100, will head off back downwards for a while

Buy guns, and if they won't let you, buy the people who make them.

HG - always comes round to firearms with you, doesn't it ?!

Mark - another neat example of my rule of thumb in the FT today:

ND - thanks, I hadn't appreciated the ludicrosity of my choice of words....!

No probs, Ed, you can always be sure of an annoying and sarcastic rejoinder here, pedants-Я-us (+: