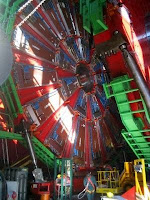 Scientists have hailed a successful switch-on for an enormous experiment which will recreate the conditions a few moments after the Big Bust.

The £605bn spending machine on the North-South border was designed to smash different political ideologies and economic theories together with cataclysmic force.

Scientists hope it will shed light on fundamental questions of the earliest economic models. Can there be an end to boom and bust? Does PFI debt exist outside of a balance sheet? Can you borrow more than GDP? What price was the pound at the birth of the Euro?

Professor Brown has long held that two plus two is nine. This borrowing experiment will determine if this particular theory is true by allowing economists to study the origins of the massive deficit spending of the early 70's.

"There was some fear that a massive fiscal Black Hole may have been created when we switched on our spending plans in 2001. The New Labour House Crasher is arguably the most complicated, expensive and ambitious experiment ever built; the project has been hit by cost overruns, equipment trouble, data loss and construction problems.There were real fears that when we switched on the machine for the first time that the cost of the electricity to power it would be higher than the project itself."

But today the project leaders were just delighted that the LHC just allows them to recreate conditions from the parties heyday.

"We have discovered what the so called "Dark Mass" actually is. Its pissed off voters and they hate us."

If the universe had shrunk by 25% at the moment the LHC was switched on, would we notice if the shrinkage was uniform?

Bill, that is just great!

2 plus 2 does = 9. That's why The Goblin King can swipe 5/9 of GDP in taxation without making anybody worse off, because everybody still has the 2 they started off with.

I'm excited as The Large Hardon Collider will be able to probe the Big-Bang theory as well as explore Black Holes!

That was inspired, thanks for that.
SS