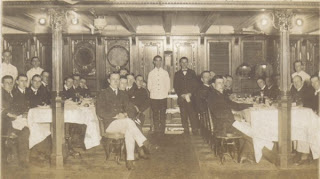 Pondering Mr Drew's post below on the likelihood of a snap election, and the comments, I can't quite believe he will do it.

In the days of the Battleships, when the Royal Navy ruled the waves, officers equipped their wardrooms with plants, chairs , tables, bars, and whatever little luxuries they could afford. A ship was judged by other sailors on the splendour of its senior mens quarters.
But, just before battle all the wood paneling and wardroom sofas and stuffed chairs, mess tables mirrors , carpets, paintings, sports equipment and trophies was disposed of, over the stern. Plus food, the paint, cleaning equipment, flammable material of any kind, sometimes even the crockery and utensils for 1200 souls would all be thrown over the side.
This was war. When battle was coming and the phrase "Clear the Decks" wasn't just to have a good working space. It was to prevent unnecessary casualties from shrapnel, wood splinters and flying pots, plates and pans. If you lost the battle the whole ship was gone, so what price a few cocktail cabinets?

Ships that had spent their peacetime winning awards for the pristine paintwork { the paint often paid for by the captain himself as war office supplies were so meager}, were suddenly painted a universal dull gunmetal grey for war.

This is what's occurring. Probably not a snap election but a preparation for war.
So the likes of 'family friendly flexitime' goes over the side with the gramophone and "700 new armoured vehicles for the troops" comes up the ammunition hoists.
Deception tactics like the high speed rail links between London and Birmingham, that will never be completed inside of 20 years, suddenly get airtime to take heat out of the Tory plans for a high speed link.

But the Tories need to understand that Labour is serious. Mr Brown, like a good admiral, cares only for winning the battle.He is prepared to take the Tories on. And preparing to win at any price. Captain Cambell and Commander Mandelson have already been taken off the reserve list and given a command. That means even the most prized policy and deeply held socialist beliefs are not exempt from being discarded. See Mr Drew's list below for a sample of the already abandoned. So the Unions, Afghanistan, America, Lisbon, SATS, Scottish Labour parties concerns,PFI, tagging offenders or Student Loans, Public sector pensions, green energy, equality and diversity laws, immigration, lone parents and his own reputation for prudence can all go overboard with the expensive paneling if Mr Brown feels that they will not be needed, will be a diversion or may cause him damage come election time.

Cameron's Tories still seem to be hanging on to cherished policies like the fuel escalator or double the number of single rooms in hospitals. Maybe the Tories need to stop sitting around in the beautiful teak lawnchairs on the aft deck sipping gin and tonics and prepare to go to action stations dumping any clutter, dead weight, ballast, hazardous items or unnecessary policies or people over the side and get their "A" team on the bridge right now.

Because a big and bloody battle is coming, and Admiral Gordon is taking no prisoners.
Posted by Bill Quango MP

Its interesting that you use a shipping metaphor as I just realised that the biggest shipping owner in the world via RBS and HBOS is now the UK Government!

Who's paying for all this?

The Labour party is technically bankrupt.

Said this many, many times. Labour, Bliar, Brown, Mandelson and Campbell (spit) all fought a terrible and dirty campaign from 1994; it was that that brought politics into disrepute. Look at what they did to Hamilton, amongst others. They are a sleazy bunch of dirty fuckers and deserve any and everything they get. They are completely without honour or moral fibre, even while complaining about others or calling for unity.

The problem has always been that the Tories have let them get away with it, and still do.

The Tories must go on the attack and get down and dirty with them; there is little or nothing Labour can say that cannot be countered.

excellent riposte ! It's a perfect analogy; and messrs Mandy & Ali are exactly the 'wartime' commanders you portray

(I stil think they're keeping all options open !)

This is a better written version of what I have been saying! Cameron is (apparently) very hard-headed and single-minded too underneath his nice boy exterior. I hope he and his team have the mettle for this.

Excellent piece. I'm also reminded of the inter-war army, when class, breeding and a good polo seat were considered the attributes of a decent officer, and regimental messes were heavy with the silver of past glories.

Of course when war came, it was soon realised that a decent polo seat didn't make you win battles and it was said seriously 'It's time for the gentlemen to go out and the players to come in'. The army held its nose and appointed ruthless winners to positions of command. And it worked.

It's high time Cameron assembled a front bench team of scrappers and bruisers willing to mix it with the comrades. The semi-retarded dilletantism of some of those muppets wouldn't survive a minor armoured probe.

I think the problem for the modern Tory party is that if they tried to identify clutter to throw overboard, they'd all point at each other and wonder where to start... where are the attack dogs among the Tories? I've seen them wheel out Redwood and Hague recently and that was an underwhelming experience. Problem is that the George O and David C don't seem as fresh as they did, and there aren't any bruiser-heavyweights around... Chris Grayling, the shadow home secretary whose name I can't remember... they're very... tea and biscuits...

Mutley. I had no idea. Glug Glug Glug.
UK HMG does now seem to own all the construction companies through the same HBOS mechanism

AntiCitizenOne.. you already know the answer to that one

Houdini "The Tories must go on the attack and get down and dirty with them" precisely. I did think Cameron would inherit by default, but fear makes people cling to familiarity as John Major knows.

ND: Definitely keeping options open.
But GB can't risk to be seen to be preparing for an election that he may have to call off. Couldn't live down the ditherer tag again.
So it will be low key and they will have to be more than sure of a
victory to even hint at an election.

Raedwald/Sammy
Thanks.
as you say who to bring in for the Tories. Tebbitt..too old and blimpy. Hague and Redwood?
competent... but the Tories need someone not afraid to throw molotov's around. Hmmm.

Sammy: more than the Tories deciding what to junk,{although they must look at the first team again. Reshuffle time I think} its more of a warning that Labour will drop anything that will cost them votes. Labour are taking multiple positions on old policies, like they have with immigration. ie They seem to be for unlimited and capped immigration at the same time and can now rapidly switch message depending on whether they are campaigning in Stoke or Salisbury.

Now they can overrun a static Tory defence on "THE COST OF IMMIGRATION AND ITS EFFECT ON SOCIAL SERVICES"
with "The Benefits of immigration..multiculturalism/reviving communities/doing vital jobs and outflank arguments against immigration with "We have capped immigration..what's your problem?" even though they haven't.

Cameron needs more than the economy as a line of attack. He was doing well on social as economic change before. The 15" "broken society" salvo is still potent.
As Houdini says ; "there is little or nothing Labour can say that cannot be countered."

An interesting take on the battles to come... and I have to agree you're onto something here.

I think the Tories are fighting fit. Just look at the energy and excitement they displayed in Crewe & Nantwich. However, this seemed more like a guerilla attack - albeit a successful one - but a national election needs a full deployment of the entire army.

I'd like to see (indeed expect) the Tories to be out in force every single day from now until whenever an election comes. Labour is coughing its last, we daren't sit back and allow it to recover.

JP..
Yes, agreed. Look at the post on the USA election for some strategy.
Glenrothes will be interesting.. And Mr Brown is going to give himself two really exploitable own goals on Post Office closeures in Scotland and the detachment of Interest rates from his control.