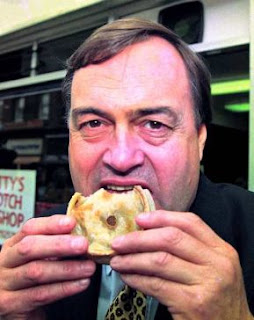 Not many readers have praised too many policies so far. But it looks like minimum wage is considered a success.
Any more from this lot?

{shame the 10p tax botch took some away. Still, take it as a victory.}

22. Created Sure Start to help children from low income households

{ And what a waste it has been. 3billion pounds in 4 years. The Guardian, hardly a hostile, paper said in 2006,"Today's Guardian offers the bleak assessment that Sure Start 'harms children who need it most". It is a typical well intentioned, and reasonably good idea, badly implemented, unmonitored and unrefined. Not enough success to earn a full credit.}

{Its closed now. Not sure what real help it gave. Its certainly a massive cost for business.No credit}

{and an extra £60 for the cold winter payments to over 65's too. Come on Prezza. Update the list ,its been around a while now, blindly copied onto the web pages of the faithful. Pensioners have benefited under NL. Except for the devastation wreaked upon them by care home costs, council tax and fuel/food price increases etc. Half a credit, as a lot of it is just sleight of hand}

25. On course to exceed Kyoto target to reduce greenhouse gas emissions by 2010

{Not really. Rises in carbon emissions Year on Year reported rises for 5 years out of eight And making the future 80% cuts is just as unlikely}

26. Negotiated the historic Good Friday Agreement in Northern Ireland {Yes. John Major got it started and Prime Minister Blair finished it. Its not the best deal ever made, and strongly resented by some, but it was always going to be really hard to bring about. But .. yes, full credit. At last something to call a legacy}

{ In fact 110,000 odd new teachers by 2006 according to Hansard. How many left the profession was not disclosed. Still, there was a teacher shortage problem, less so now, so full credit}

28. All workers now have a right to 4 weeks’ paid holiday

{ erm ..4.8 weeks John. I know you cribbed the list that appeared on Mr Dale's a while back by Hazel Blears but you could at least update it. 5.6 weeks annual leave from April. If you employ 9 workers you would need a tenth, just to cover the holidays. Cost to government.Zero. Cost to business..massive. No credit here. No one was asking for more than 4 weeks. Its a union sop, that falls squarely onto business. Suspect it was a Euro alignment rule anyway. No Credit}

29. A million pensioners lifted out of relative poverty. {How so? More money given back but pension raids, stealth taxes, energy and food costs can't have lifted 1million out. Now with near zero savings rates those happy pensioners may not be so happy. Just statistics JP. No credit.}

Actually the minimum wage is one of the most pernicious examples of intervention in free markets. It creates a disincentive for employers to "take a chance" with someone young, inexperienced, older, or from some other minority.

I agree. But at a conference I was at a few weeks ago it was widely seen as ending inequality in wages and ruthless exploitation by employers.
If you look at JP {1} post in the comments and see the response to min wage

take it as a victory

How are you deciding on the victories? I agree with David that the minimum wage has effectively priced a huge number of people out of jobs (why would an employer take on someone to do an unskilled job at such a high wage?). Surely sweeping the floor for £2 an hour is better than sitting on your arse eating crisps and watching Trisha?

No 25.
Assumes Kyoto to be logical, and not part of a new global initiative for a new method of control and taxation.
The globe is actually cooling if you bother to check properly.

So we failed.
Good!

Well, ahem, are we to assume that they are teaching as productively as before, instead of more social engineering PC bullshit from central command?

How can you give credit until teaching standards are measured honestly.
And standards measured honestly depends on your view of the direction that this filthy fabian government is pushing OUR society, since they have decided to politicise every damn thing.

I guess that gives you just the merest hint of my views. :-)

The DRC was desperately needed but typically about as helpful as a chocolate teapot. There is a dire need for disabled people to be given equal rights in the UK (last I checked the UK still hadn't ratified the UN treaty for equality for disabled people as politicians were getting het up about what exceptions they wanted to make)
The reason the DRC wasn't much use was because of the way the legislation was written (isn't that a theme of this govt?) which meant the DRC could offer advice, but unlike other minority groups, the DRC cannot act for an individual, but only provide the information that person wanted to tackle the discrimination. Most disabled people are too busy trying to get through life to have the time, resources or ability to take responsibility for what is essentially a civil action themselves. Compare that with say racial or sex discrimination and the failure of the DRC is obvious.
BG

BE.
As I said, i agree with your views on minimum wage. It was a political decision rather than an economic one. I can give you legion examples of small firms who pay under minimum wage for cash, to young workers, which benefits both.
However, as I have said, many people I am in contact with support minimum wage, point to its benefits in equality, and setting a minimum amount for labour.
As I said in comments of post 1 of "John's achievements" in many areas of the country in 1997 young people were working for £2.00 - £2.50 without any complaints.

Anon.Welcome
on Emissions. Erm not saying that targets are being met. Don't agree with Prezza on that one.
On teachers, you may well be right. I thought a part credit for stabilising the profession, getting an awful lot of teachers trained. Under Mrs T teachers reign were a sort of arm of militant. A such there was a policy of keeping wages down to encourage them to leave. That led to an awful neglect of teaching. The civil war rumbles on but is more "troubles2 than open warfare. Doesn't that deserve some recognition? SATS, although a cock-up, did at least bring some testing and accountability.
And i was being pretty generous in interpretaition of a success.
Wait till you see the next 10!

BSS.
All for equal rights and entitlements. Not for 100% compliance with regulation for the sake of the regulation. Am meeting a disabled access officer at a listed building site in 1/2 hour.
I foresee all sorts of mad impossible requests for a ramp to be affixed to a Norman Hamstone exterior and an archway widening. It depends on the officer..some are reasonable, some are letter of the law.

Nice post - but the picture!
Did you have to?

Part of the problem is the oft reported "Benefits lowest paid" has a knock on all the way up.

I think what one needs to remember as well, is that Nulab brought about fifty new gimmicks every year. Most of them fell by the wayside. Look at all the things they DON'T mention.

I'm going to wait until you've had all 50 before I comment, and then only on what you claim are positives.

You've given a few victory's there that I would disagree with, later.

One of Prescotts first moves was to
" Abolish this pointless Tory Quango " and then set it up again as the re-named Connecting For Health which is still nowhere near completion, is massively over budget and won't work anyway.
Nil points.