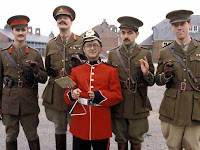 The Brownadder tries for a Fourth term
new BBC comedy/farce
pilot episode
part 2
Captain Brownadder has rushed to HQ to see Captain Darling of the King's own Pay Corps.

"Captain Darling.. how nice to see you" said Captain Brownadder, walking around the Treasury office.
"Captain Brownadder" said Darling, seated behind his desk, his eyebrows twitching. "What do you want?"
"Well Darling, I was wondering if you could let me have a billion pounds."
Darling snapped the pencil in his fingers in two with a loud snap and leapt to his feet. "A billion pounds. No chance Brownadder. There isn't a single sixpence left. You spent the last of it on that failed gilts purchase. I wouldn't let you near the Treasury again if you were the last Labour supporter in England"
"Well, now you come to mention it.."
"What do you want the money for anyway Brownadder?"
"Oh, just some odds and ends. A printing company, a stack of blank postal voting forms, an electoral role database, 1,000,000 stamps, a few thousand boxes of pens, some chairs, some tables, a conference centre, enough money to pay a large number of the unemployed to do some form filling and enough left over for a slap up binge at Mrs Prescott's pie shop."
"What are you up to Brownadder?"
"I'm starting my own postal service. I've decided against TNT"

Just then the inner doors opened and in marched General Mandelchett.
The two captains leapt to attention.
"Bhaaaa. at ease at ease. Hello Brownadder. I've just been reading briefing notes on the Red Menance."
"The Russians sir?"
"No. Hazel Blears. What are you doing here Brownadder?"
"I just came to ask for some supplies from Captain Darling."
"I hope you said yes, Darling? Captain Brownadder likes to spring supplieses on the electorate."
"Well, you see General, there aren't any supplies left."
"Jhooonsense" cried the General" Take some from the Business Development Fund. They're not doing any good in there. More dust on them than on Tony McNulty's events speaking diary."
"I rather think Captain Blackadder needs more than that sir." squirmed Captain Darling.
"Oh well in that case, tack it onto the Olympics budget. No one will know. And its not as if we shall be around to have to pay for it, what Brownadder?" chuckled General Mandelchett merrily.

Mandelchett crossed to his desk.
"Now help me with my speech to the CBI Darling. Where's my graph...ah thank you. Yes, yes.. I shall say 'things are really beginning to look up'"
"Erm, the graphs upside down sir. It goes downwards" whimpered Darling.
"Then I shall say "things are getting worse less quickly than before." Alright Darling?"
"Well, I suppose so sir. I'm still worried about this Brownadder money sir. Its such a lot."
"What's it for Brownadder?"
"The Euro elections in June sir."
"Of course. You want to have a chance to put yourself to the electoral test and vindicate your leadership under the harsh trial of a genuinely democratic election campaign."
"Well, something like that sir."
"Alright, Quantitative Easing time again, Darling"
"Print more money for Brownadder then sir?"
"No. Guacamole and Gazpacho lunch at the Carlton Club. Come and help me with my dicky tummy Darling. Goodbye Brownadder."

Captain Brownadder made his way back to his bunker. Now for the cunning plan he thought to himself. The most cunning plan since Tony Blair had suggested Rock,Paper,Scissors at Granitas.

Over the top we go...that's the next problem most of us'll have to face. Our pensions are hanging on the barbed wire now.