What the pilots say. 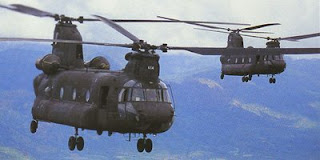 Having spent the weekend with some Army & RAF types I sought out their views on the helicopter arguments. It seems that they are annoyed about the news coverage. They felt it made them sound like whiners. They would have preferred the generals to get the deals done behind closed doors.

When asked if we actually needed more helicopters in Afghanistan the answer was Yes, but not many more. I quoted the numbers of extra troops and extra helicopters and pointed out the disparity. The flyboys replied that they were carrying out twice as many sorties as before. They were using their aircraft and aircrew to greater effect than they had been. But what they actually wanted was spare parts. They said that the spares shortage was critical and led to many out of service helicopters. They couldn't believe that the spares shortage from 2001 was still ongoing. As the men said, this is the easiest and cheapest bit. Far cheaper than new helicopters.

{Not many headlines in spares though. I expect the shortages are to do with Just In Time sourcing and maintenance budgets being kept at peacetime levels but..}

A helicopter that is grounded now is twice as damaging to operations as it is performing twice as many tasks. The helicopter pilots were angry that the spares had not come through and claimed it has been a priority for both army and airforce for years, but has not been given the political priority it warrants. They stated that the 6 Merlins, bought from Denmark in 2007 and still yet to deploy to the theatre, purchased because...well because they were available, were not suitable and not really required. All of the pilots wanted spares, not new machines. Not even Future Lynx, which they do not rate.

What they all agreed on was that they want is Chinook. These big helicopters can do all the jobs of the smaller ones, can have armour bolted on as needed, can drop into combat three times as many men as a smaller one. The pilots said that the argument that smaller helicopters can land on a smaller landing zone is a bit of a myth because, although they can, the army want the soldiers to land together, not scattered on small LZs. So they often pick a big LZ . The big, twin rotor, Chinooks carry far more cargo than the Lynx. If it loses a wheel it doesn't topple over like a three wheel craft does. {This is quite common apparently.} It has an excellent flight record and the pilots say that what does it matter if you send a big helicopter on a small helicopter job. The Americans do it all the time. {I suspect the answer is cost.}
Update. The Sunday Mirror says Gordon Brown is going to send Chinook helicopters to the region. Hooray!
Only it is going to be one or two new ones. Hmmm. I got the impression these pilots were talking of about thirty Gordon. Still, its a start. {another one}

They can gladly have the Chinook that flies over and over my house near portsmouth on a daily basis, i presume on a training exercise.
What a sad set of events this is!!

Chinooks fly regularly over my parents' house near Huntingdon - get them out to Afghanistan!

I'm ex REME and worked with AAC, not as an air fitter. Also worked in theatre too using the aircraft.

These blokes are right they need spares and the men to use them, but they are pulling your leg about more aircraft. If there is a finite amount of men to fly and crew them then they are right, but that is bollocks. We need more aircraft and their argument is false.

Sorry, but they are not correct in what they say.

Anon / Marksany: Couple regulary fly over mine too.

Houdini:I think they meant that they if they had more spares they could get more of the aircraft they already had into service.
These guys were mostly RAF helicopter pilots just back from Afghanistan. I guess they were looking at what they had and what they needed.
Some Army commanders might have had different ideas.

Thanks for the revelation about spare parts, any mention in MSM ?
They can have our Police chopper too, noisy bastards.

All sounds credible to me.

The problem might not be so much spares for 'grounded' aircraft, but spares for PPM. I'll bet parts replacement hours etc. are all based on aircraft working non-operationally on the plains of North-West Europe; for aircraft operating in combat in A'Stan you need to throw the book away and rely on the experience of the fitters.

Having spent the weekend with some Army & RAF types I sought out their views on the helicopter arguments. It seems that they are annoyed about the news coverage. They felt it made them sound like whiners. They would have preferred the generals to get the deals done behind closed doors.

That's true because the last thing the armed personnel are are whiners.

However, with all due respect for them, they are not in there trying to do the deals with this government and getting shafted and lied to.

Generals don't generally come out and do this type of thing, do they? Can you remember this situation before the Labour era?

The generals made it clear that when it comes to saving those men's and women's lives, no strategy is off limits. Yes, they would have liked it to have been done behind closed doors but the cynical government, knowing this, has forced them out into the open to appear whiners, which is what this post is intimating.

Saw a few Chinooks flying over Salisbury Plain at the weekend. Are we really short of aircraft?

Anyway, if you take the battle to the Taliban you are going to have higher casualties. Seems the generals are suddenly happy to blame this on Gordon Brown. What they should have done if the lacked the necessary equipment is refused to take part in the push against the Taliban as they are under-equipped and have been for some time. Remember that constitutionally the army don't work for Gordon.

Conclusion I have come to is that the armed forces have been unprepared for this sort of fighting for some time, they continue to be ill-prepared despite having fought this type of war for several years now. They are particularly unprepared for taking the fighting to the enemy and they are taking casualties.

The squaddies are accepting this bravely, but they are in this position because the chinless wonders at the top of the armed forces that came into officer positions through the combined cadet force (CCF) at public school ahve never seen active service and didn't have the balls to face up to the government and demand the treasury properly fund these actions until it was way too late. No doubt the families of those lost in battle are starting to ask questions and the top brass in the armed forces are seeking to deflect attention from themselves to the politicians, but like I say, they are in the position where they can refuse to fight if they are under-equipped because they report to her Maj not the government.

I see even the previous minister is seeking to deflect attention from his failings by blaming the current cabinet. He obviously realises that the finger of blame could point to him now the whole issue has burst onto the front pages.

Anonymous...you talk through your arse, and are obviously a tacit Labour supporter. To suggest the likes of Dannat and jackson were the product of CCF and use this as a baisis for them not knowing anything shows you as a cretin.

Get back to sucking on Labour knob and leave the serious discussions to the adults.

Electro-Kevin said...
This comment has been removed by the author.
12:10 pm

Dannat was awarded the MC aged 23 on active service.

There has been a lack of military commanders openly critical whilst still in command. Doing so after retirement is a little too late in my view.

My belief is that Nu Lab often only responds when publicly shamed and that Dannat is right to do so.

How can it be acceptable that Brown cut the helicopter budget by £1.4bn whatever those good RAF chaps say ?

Neil Hammilton said in the press yesterday that Brown ought to face court martial and be shot. The question should not be how this chap remains in power having betrayed our forces so badly, but why the hell he is still alive ?

Banned: It is in the MSM, but the main story is total aircraft numbers.

Raedwald:That was pretty much what I surmised. The defence budget will not stretch. New vehicles and the SA-80 problems were 1st priority. Then the boots and radio problems.
Then it was lack of body armour. Plus wartime ammunition and ordnance expenditure.. Spares! Low priority.

James Higham: In fairness this was a social situation. The question I asked was about the stories in the press. The pilots indicated they didn't much care for the press as it made them look like they couldn't cope, when they felt that they could. but they also acknowledged that they could do more with more spares. Their main fear was that another 20 helicopters would arrive, like the Merlins, that require different spares.. and no extra spares for their current fleet.

I did mention this. The guys said that they tend to operate together. If moving forward, all the helicopters go, for maximum lift. There are enough helicopters for the operations that they carry out. But IF some are grounded for maintenance there aren't enough spare aircraft for emergencies.
They said they would take more if available but the problem was keeping the ones they already had in the air.

Re the top brass. I think it is well documented that they have asked for, and were promised, equipment and troops to fight the wars. The politicians have promised and not delivered.
There aren't many fans of the MOD organisation here. Definitely the forces should have done more planning and not committing to ships and planes when they needed boots and transports. But the military cannot refuse to attend a war anymore than the police can refuse to police a summit.

Very informative, thanks BQ - why not push this into the MSM?