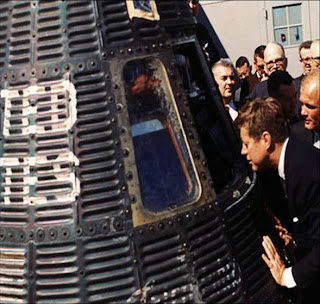 Writing to promote his Energy Strategy, Ed Miliband conjures up the shade of JFK with this rousing and topical call:

"Forty years since the Eagle landed on the moon, the idea of a new Apollo project has become shorthand for how we should tackle climate change: politics forcing through the technological limits, a decade-long push, and a nation unified for a shared goal"

Hang on there, JFK's main aim was to put one over on the Russians ... oh, wait a bit, Ed's got some more motivation for us:

"Two-thirds of the world's gas is in Russia and the Middle East, but renewable energy is homegrown"

Do we still really need a Russian bogeyman to stir us into humungous levels of public expenditure on grandiose schemes ? Oh, and with the UKs only big wind-turbine manufacturer gone belly-up, just how homegrown are these plans ?

I'm really confused. The British government has excelled at scaring the crap out of people, whether it's paedophiles who are going to rape all our children, terrorists which are going to destroy our society, or kids going on a knife wielding rampage round the country, or a regular boring flu outbreak that will depopulate the world.

But the only genuinely scary event that will touch everyone is peak oil....

So Mr. Miliband its very easy. Scaring the crap out of people is standard SOP these days so just stand up and tell the fucking truth. (Ohh and hydrates have just re-written the gas map so please get current).

Ah yes, it's the old enemy without gambit, last gasp of any unpopular regime.
As for tackling Climate Change from within, the female editor of Vogue Magazine was on Radio Two yesterday telling the audience how lovely it was that chav brutes were being priced out of airtravel and that they should stick to Southend.
This roused a few listeners into 'phoning in but few seemed to get the point that raising airfares " to tackle climate change " would mostly affect the poor, they contented themselves with calling her a snob.

Oh btw Ed, as though I care what you think, most wind turbines are grown in Denmark where they have considerable over-capacity having realised that their own wind-power project has failed.

Ed Miliband is so far out of his depth. He has been brought in as a new face but has done nothing other than fluster around, looking for another stupid policy announcement - much like his cabinet colleagues.

Vestas is a Danish company. The plant in the Isle of Wight made rotor blades only.

"a regular boring flu outbreak that will depopulate the world."

The worst case estimates are that 65,000 Brits could die from this flu epidemic by Christmas. This compares to 10,000 in a normal flu epidemic. That means as many as 55,000 people could die who might otherwise live if action were taken to limit the number of infections. I would say the UK government is being rather complacent - other countries are taking it far more seriously. Just to put it in perspective less than 100,000 Brits a year were killed during WWII

Fred - in any physical sense, don't expect peak oil in our lifetimes (economic peak will be altogether earlier). As you say (& as 'Dex', another commenter on theses pages said a few week back) shale / hydrates may change the gas map: very interesting

Banned - fair enough but if you'd read many many of the posts on C@W over the years you'd have seen we are no friends of wind generation around these parts: no subsidies! is the cry, which means they need to bear the full (growing) cost of their intermittency

he seems more like a general who's been given a hopeless task, but whose soldierly loyalty compels him to give it his wholehearted best shot

(which doesn't make it any the less hopeless)

anon - thanks for the clarification: flippancy made me sloppy

Banned:
Heard it. She was a snob. If you didn't want to fly to visit a museum you shouldn't fly, attitude.

I recall in the history books a technology that was to generate plentiful clean electricity to satisfy our wildest dreams of energy usage. All that was needed was a bit of upfront state investment and Britain would have a world class industry to generate income and exports. If Britain pushed ahead of the rest of the pack we could capture the global market in this field. Better yet, it would be so efficient that domestic electricity use would eventually become not worth metering.

- that'll be nuclear power then.

Roll on - we need about a dozen. Rolls-Royce to build them, aided by the French.

Nope mate - the TRULY scaring event is amongst us already, in the form of James Gordon "Mad as a snake" Brown.

All else pales into insignificance

They are ALL out of their depth. Even Jackboots admitted as much, and her follow up, the man to be next PM (he did a real job once, so is supremely qualified) admits as well he has to be briefed on everything.

Surely the must useless cabinet of all time

@nick drew
Why do you think we will not hit peak oil in our lifetimes?

Sorry, ALL the evidence is that we have hit peak oil (the oil price spike, that caused this first crash should give some clues). Saudi announced in March that they have reached peak oil. Which pretty much means the world has reached peak oil. Best guess you will see "oil price spike, economic crash, oil price crash", repeated with increasing severity every couple of years from now on until enough people get pissed and civil wars kick off in oil supplying countries (Saudi is prime for major civil unrest) at which point its game over (while there is still a lot of oil left in the ground)

Specifically the oil shortage will be light-sweet crude. There is hardly any infrastructure for processing the heavy sour (which goes for a discounted rate) but processing heavy sour is a major headache.

We havent found any mega oil fields (defined at >500M barrels) for a long time, the last mega oil field has just gone on-line (takes about 10 years from discovery to production).

Dont forget we (the world) use 1 billion barrels of oil every 11 days so even the new mega fields are a drop in the ocean.

Yes, as the price goes up, then more oil becomes economically feasible, but its still a tiny drop in the 1 billion barrels.

The gas outlook has improved with fracturing shale and hydrates (but these are still in the R&D phase, but look like they will work) and it would be a major effort to covert the car fleets in the world to LPG (and gas stations)

Coal, yes there is a lot of coal left, in the UK its very hard to get to (its under the north sea) and the only approach that's been considered is gasification of the coal, but that's a LONG way off.

So, we are definitely screwed with transportation fuels (aviation, diesel, petrol) which has major implications to the supply chain. And converting the car fleet to electric is a huge undertaking, and the cars & infrastructure arn't even available yet. Converting gas stations to "pump" electricity is a major grid upgrade (each station will require about 3000amp feed per concurrent car being charged (your domestic supply only handles about 50amp which is ok for overnight charging)

@anon 9.38, yes more people MAY die, but its still very minor in the big picture and doesn't warrant scaring the living crap out of population. Heck the death rate is likely to be higher now that panic has set in and its very likely that we will get a lot of serious adverse advents due to a largely untested vaccination. Yes we need to be informed, but at the moment its 99% scaremongering and 1% fact.

Fred - as I understand it, proven (in-place) reserves amount to more than 5 x cumulative production to date, accessible @ $100 /bbl (or maybe less)

I'm talking peak production, not total volume which is quite different. But ya essentially the price of oil will be the problem.

But its the peak in production which will drive much higher oil prices.

Not sure about your figures as proven reserves are based on what they actually think they can get out the ground now, your figure is a rather optimistic theoretical number based on technology that doesn't exist now and therefore cannot be proven reserves.

Its all politics in the end ;-)

C@W "Oh btw Ed, as though I care what you think..." was not directed at you but milibaned, sorry if that was not clear.

Bill, yes she was a snob, outrageously so; she was set up to get the listeners 'engaged' but they only responded to the snobbishness and not what the presenter was getting at. That Climate Change was being used as an excuse to tax the masses out of the sky.