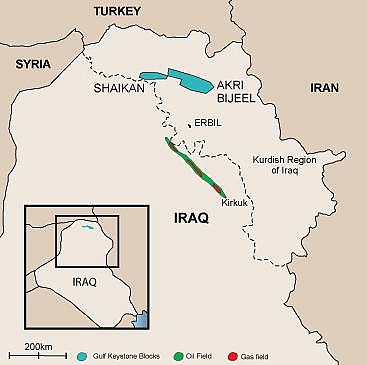 GKP is a very small oil company that has attracted a lot of attention since the summer. It has a a share in a number of oil exploration blocks in Kurdistan, Iraq. In the summer it hit a lot of oil, quite how much is in dispute but certainly over 1 billion barrels and perhaps as many as 5 billion. Plus it still has some blocks adjacent to drill next year.

This find caused its shareprice to rocket from 12p to 100p. Quite a ride for a few days, since then it has been one of the most watched and volatile stocks on the AIM market. This is because it has very few institutional backers; firstly it was a small company without need for major backers, then it did a deal with ETIMAC - an Arabian group who bought a 50% share. Many people are wary of the company for its strange dealings and penchant for doing odd share placings at convenient times for current holders.

So instead of lots of institutions, there are thousands of small private investors, watching and panicking with every move. As a result the shareprice is very volatile and behaves quite strangely, dropping on any good news as people sell out and being bought heavily on any dips as new investors look to get in.

Its future is utterly tied up with global politics, at the moment the oil is worthless as the Iraqi government will not recognise the Kurdish contracts. This an issue which will take at least a year to resolve - and maybe not happily for the Kurdish investors. Also the oil has to be retrieved and that needs a lot more investment than GKP has.

It is a very interesting situation to watch and, as you will have guessed, I have some holding of GKP shares, as well as another Kurdish explorer, Heritage Oil ( you can put HOIL in an ISA too). It is very high risk to invest much, but it is interesting to see how global events can impact even small companies.

As an investment it is a real all-or-nothing one. Easily £3-£5 if they get the licences and can start selling the oil....or 5p again if the contracts are voided.
Posted by CityUnslicker

In the last four thouand years or so there have been many civilisations come and gone in this general area. And a lot more wars.

Will the Turks have any input in this then?

im surprised some of the iii trolls havent had a pop at you on here!

I am convinvced that profits will be booked before Christmas in a stampede for the exits so I'm trying to restrain myself.. and yet opportunities keep presenting themselves, though I think I misssed the boat on GKP. I really liked the piece by Dylan Grice/Soc Gen on undervalued stocks. Any view on his bargain 11?....