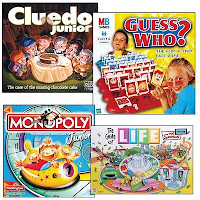 Super new boardgames
Now in stock
Deluedo - Someone has murdered 150,000 Iraqis. Was it Miss John Scarlett, the Spy? Professor Plum, the schools secretary? Maybe it was Colonel Goldsmith, threatened in the library with a lead pipe? Or Reverend Blair, on the comfy sofa. With the cabinet?

Battleshits. - Classic game of sinking your opponents manufacturing economy.
Made in China.
"G-20."
" You sunk my balance-sheet!"
Pass the Pigs. - The hilarious game of MPs expenses. Claim as much from the trough before the public gets wise. Deluxe version features pewter hand painted character pigs. -David Chaytor,-Geoff Hoon--Jacqui Smith--Elliott Morley--Alistair Darling and the lovable Douglas Hogg

Snakes and Leaders - Climb the political ladder, but beware of snakes bringing you down. Don't hit the long McBride one that sends you right to the bottom.

Crappy Families - Install your relatives into the most imaginative positions possible. Special Advisor, Accountant, Secretary, Web Designer, Press Officer, Twitterer, Party Blogger or Personal Assistant. And all at the tax-payers expense. Fun and employment for the whole family.

More write ups needed in the comments for these and Scrabble - Twenty Questions - Jenga - Downfall - Go for Broke - Monopoly - Risk or any others.
Posted by Bill Quango MP

I haven't played Deluedo yet. May I also recommend Fisk in the world politics category, Twister II with extra rules & regulations (health & safety), the new edition of Go For Broke and the not to be missed, long awaited, well overdue, full of promise, launch of Scramble? I think Scramble should be in the shops within the next 100 days.

Twenty Questions - Chilcot edition.
Players must answer the questions without replying with 'Yes - No - or any credible reasons for at all.'

This is brilliant, Bill. Superb.

Rabble: it's a riot! Join other environmental activists, union activists and ox-bridge grads in this outrageous game of political protest. Protest Tory cuts, global warming, and capitalism by assembling letters
into words on the placards provided. Score double word points for use of 'Children' and triple word for 'Nazi'.(Self-righteousness not included)

Fisk - the UK border control game of skill and chance. Pat down passengers from all over the world with the aim of total humiliation of your opponent. Landing on erogenous zones is fine but be careful not to profile. And remember if you're going to beat the terrorist you'll need a bit of luck!

engla - a game of total economic collapse. Laugh and marvel as players take turns pulling support away from the British economy.

Watch the economy wobble as QE is pulled away, budgets are snatched and manufacturing is removed.

Sometimes you might have to move slowly sometimes fast but just don't be the player in charge when it all come crashing down!!!

Jack Straws : Try not to cause any wobbles at all. Ever

Twister: The game of Spin. Players read a phrase such as "The inequality gap has increased dramatically since 1997" and have to change it into good news.
"The poverty threshold has risen - The Tories were worse - this government is DETERMINED to end rich people"

{have you noticed how DETERMINED has replaced COMMITTED in government circles recently.
Determined indicates a decision has been reached, but no action taken. Committed is an actual pledge to do something.}

Liar dice: this is tremendously popular in Parliament, particularly on the NuLab benches, if you look carefully you can sometimes see them playing it during PMQs

It brightened up my weekend. But I would rather not think about McBride's bottom, thank you.

Mark. There is a cheap travel game on Engla called Ding-dong-dell.

Each player has a number of tiles shaped like gold bars, with various denominations written on them.
£1 billion - £5 billion £50 billion,etc.

Players take it in turns to throw the bars down a well. When no one has any bars left the game is over.

chumps is not precisely the word I'd use for Mandelson, Bill.

who murdered 150k iraqis....other iraqis I'd imagine with a helping hand from other Islamist 'brothers'.

Anonymous said...
This comment has been removed by a blog administrator.
3:39 am

Anonymous said...
This comment has been removed by a blog administrator.
6:03 am

Role a dice to determine your gender, a second for your marital status, a third for your addiction/affliction and a fourth to see who you do 'it' with.

Surprise yourself and gob-smack your friends with your unfathomable actions!!!

Oh My Godzee: the cheeky game that no other party can match.

I dont always understand what you're on about over in the serious stuff, but these I loved :)