Ed Miliband is Bananas Too 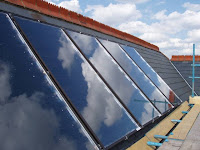 George Monbiot is not everyone's cup of tea, but he's an honest man. This, from the Grauniad, on the occasion of Little Ed Miliband's completely barmy feed-in tariffs for home-generated electricity, to be introduced (you guessed) on April 1st.

"Are we really going to let ourselves be duped into this solar panel rip-off? Plans for the grid feed-in tariff suggest we live in southern California. And at £8.6bn, this is a pricey conceit with little benefit The government is about to shift £8.6bn from the poor to the middle classes. It expects a loss on this scheme of £8.2bn, or 95%"

Normally it's David Miliband who's brandishing the banana, but Little Ed is keen to prove he's bonkers too. The essence of current government energy policy-making is: the dafter the idea, the bigger the subsidy. It's specifically designed that way: Monbiot again -

"The government wants everyone to get the same rate of return. So while the electricity you might generate from large wind turbines and hydro plants will earn you 4.5p per kilowatt hour, mini wind turbines get 34p, and solar panels 41p. In other words, the government acknowledges that micro wind and solar PV in the UK are between seven and nine times less cost-effective than the alternatives"

As we've noted before the Tories are quite taken with feed-in tariffs as well. Apparently there will be a Tory energy policy along shortly. I'm trembling, and it's not with eager anticipation.

Only socialists could come up with 'all must have prizes' pseudo-incentives.

The funnny thing is that the government in France has started to backtrack on these feed in tariffs because the future cost will be absolutely prohibitive.

Germany has stopped doing it I think.

Anybody with a large roof (supermarkets, factories, etc...) will make a killing out of this.

As they have already done in the aforementioned countries.

It really makes you wonder what qualifications are necessary to be a politician and come out with this shit. Especially shit which has already been demonstrated as a complete failure economically, leaving aside the technical aspects such as over production when it is not needed, or back up production when there is no sun (which happens quite often it seems, what with clouds and night...)

the lights are going to go out in Britain, aren't they?

Has Monbiot got his math correct on the 5-8% return? If so, panels may be invested in...

Just because I don't agree with something doesn't mean I won't take advantage of it :D

With regard to solar, this looks interesting. One for the near future if it scales, and with it's absorption and conversion rates useful even at UK latitudes.

I've heard that household insurance premiums go up about 5% when you have solar panels. Things ain't so bad that I am tempted. Geothermal looks more interesting. Should I tell Mr M to start drilling?

Why don't we all just use less?

To bring it up to date: wee Ed has been trying to justify his latest brainchild. That is that if the incumbents of any house spend oodles of money on windmills, solar panels, dried rabbit pearls microwaved to make 'em into solid fuels or micro hydro schemes then they can pass on the cost of those systems to the purchaser of their house so that the costs are spread over, say, 25 years, by means of the purchaser taking over the remainder of the loan. i.e should you wish to sell your house, update according to govt. guidelines and the buyer will be resposible for your loans.

Where I live the sky is blue with a big yellow thing giving us heat.

I cannot be bothered anymore.

There is a basic truth which socialists & greens never fail to forget (or perhaps fail to learn or understand). If it is any good, it won't need subsidising. If it isn't, no amount of subsidy will make it good. Solar & wind energy fall absolutely into the latter category.

This is just yet more green nonsense. Botogol is absolutely right - the lights are going out in 5 years' time. That will be quite an achievement for an island made of coal surrounded by water, with some of the biggest tides in the world.

Bogotol, SW - don't disagree with the broad thrust (and there will indeed be brownouts during the Olympics), but I doubt very much there will be sustained blackouts

even 3rd-world dictators know that blackouts = ejected from power

there is a really huge quantity of ready-to-go gas-fired power plant projects waiting in the wings: gas is cheap just now: the technology is conventional: lead-time = 2-3 years

enough of this will kick in to save whichever govt's bacon, and the CO2 be dammed: GDP trumps GHG every time

Nick, yes, you are right about the gas I'm sure. By then the wheels will have completely come off the Global Warming scam so nobody will care much anyway.

It will probably be a bad time to make ourselves beholden to Mr. Putin, though, don't you think?

On subsidies, I see the idiots have also committed to spending stupid amounts of our money (borrowed, of couse - there is no other sort now) on the most expensive "renewable" of all - offshore windmills in the North Sea. There really is no end to their lunacy, is there.

Nick, you can't trust these politicians to face the right way round on the lavatory. They will (too late) accept the need for more power, but they lack the competence to deliver. qv any government run IT or transport infrastructure project.

Mr Yachtsman
a bad time to make ourselves beholden to Mr. Putin, though, don't you think?

disagree - now's the very best time to strike a decent commercial deal, with Russia and many others (see several recent posts & comments on how poorly Gazprom is placed just now): and since greater dependence on gas imports is the fate of EU countries in all conceivable scenarios, we just have to get the trade diplomacy right, or freeze

offshore windmills ... really is no end to their lunacy

a long-time bugbear of ours round here !

SW
lack the competence to deliver

yes, but mercifully when it comes to gas-fired, the private sector can knock these jobbers out in their sleep, all govt has to do is butt out !

There is a very interesting web site ate http://www.bmreports.com/bsp/bsp_home.htm

Roll down towards the bottom of the page to a "Generation By Fuel Type" (graph and table). There you get a real-time breakdown of the power generated by gas, coal, nuclear, wind, hydo, etc. and that bought from France and Ireland. Right now, wind is giving us 0.1% of our power - and in the last 24 hours, 0.2%!!!!!!

Anon - yes indeed, see also this piece we posted in January, when it mattered even more !

So if I buy a gold plated exercise wheel for my one year old grand-daughter linked to a bicycle dynamo how much will the government give me please?

@Semper: nothing, because you are clearly a white middle class plutocrat.