A final chance to spring a trap 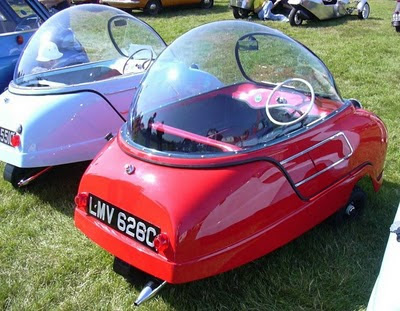 With a budget of new news, no tax rises and no cuts. That seems to be the plan; but Mr Brown always puts a few taxes over the horizon:
Next months road tax will be around £5-£10 higher for all cars except the tiniest {announced 2009}.
For new cars bought after 1/4/10 the tax is between £70 and £500 more.
The showroom tax

33% road tax increase for new cars in the common band 'I' bracket. At the same time as the end of the scrappage scheme and end to the VAT cut.
Darling's very own double dip seeing as how motors were pretty much keeping the economic figures going.

Gordon Brown used to like to push up the cold weather allowance. It was a great way of claiming a rise to pensioners and those on low income benefits while giving them nothing as it only came into effect when the temperature dropped below for 0 degrees for seven consecutive days.. It was fixed at £8.50 1995. Estimated by the Treasury to cost £100 millionish it was increased by Brown in 2007 to £25 as mild winters made it a soundbite but not a payment. But two cold winters and increased unemployment have seen payments rise to around £200 million in 2009 and around £260 million in 2010. Expensive for a PR stunt. Especially as these same groups automatically receive between £250 and £400 each December in a single "Winter" allowance.
The car scrappage scheme only had £300 million earmarked.

Chancellor Brown, erm , I mean Darling, likes to try and have a few unsubtle traps for his opponents.
This final budgets he could really go for it. Something he couldn't deliver, but sounds plausible, even necessary to relieve hardship. Something that a coalition parliament wouldn't approve or an incoming Tory government would have to axe.


New 5p tax rate?
Huge increase to tax credits?
Supertax
A guarantee for a government job for all 16-50 year olds unemployed for 9 months?
Any ideas on what will be the big non give-away in this mortuary budget?
The headline happy to motivate the troops, shore up the core, and try and disguise the secret department cuts, spending freezes and stealth taxes?
Posted by Bill Quango MP

Not the 5p tax - they've only just got over abolishing the 10p rate !!

It HAS to be tax credits - Gordon Brown's attempt to enmesh everyone in the bureaucracy of taxation. Tax credits for children has already been done. What about tax credits for the elderly? If you have an elderly relative, you could claim tax relief on him/her.

Surefire vote-winner if you ask me.

I like the 'jobs guarantee' best. They go round in all seriousness saying that it's a big difference between them and the Tories.

There is, in real life, absolutely no such thing as a jobs guarantee (short of creating even more public sector jobs), it is pure and utter phantasy.

Whatever it is, taxing the rich till the pips squeak will be a part of it - old habits die hard.

Perhaps he'll get RBS to buy the national debt - that idea worked well for the South Seas Company (for a time anyway).

Free beer for the workers?

Set the tax threshold at 23500. Over half of the UK will not pay income tax anymore.

Make the basic rate 25%, make the higher rate 50% remove the other band.

Slash some allowances in the name of simplicity

Tax credits if you recycle over 80% of your rubbish.

An emergency budget that responds to the new realities and needs of Britain today.

So complicated that you wont know if you are better off or not until after the election.

Ratbag. I am leaning towards tax credits too.For 2011.
Its already complicated and is received by very many voters. A substantial rise, with a few exclusions, should see many people suddenly 'better off'.
if the election is won by Labour then the terms of qualifying for tax credits can be changed before it comes into place. If they lose ...ohhh those horrid Tories!

MW: Even Gordon wouldn't guarantee everyone a job. The Cadbury and corus thing has rather blown that one up. But something about British jobs/Workers to fox the BNP may be ready for the campaign.

Marchamont Needham: But not overtly. Lord Mandelson is running the show now. There are no tax rises, except maybe for Tory non doms.

Demetrius. Like the theory.
But how many supporters are non workers? Or don't drink beer. Or don't want their spouses drinking beer?
A little more work required on your theme i think. try and work in bacardi breezerss.

Anon@9.30
Wow. It looks just like Darlings budget but with Gordon's red pen redactions and additions.

Set the tax threshold at 23500. Over half of the UK will not pay income tax anymore. {the city will implode. the mushroom cloud would be visible from Middlesborough}

Make the basic {tax?} rate 25%, make the higher rate 50% remove the other band.
{Frighteningly close to BOTH parties thinking.}

Some sort of tax that just happens to penalise foreign lorry drivers - like a carbon offset levy.
{Can't get it past the Eu. but a tax on motorists but hidden until 2012 so the press doesn't spot it. A tax for each wheel?}

Slash some allowances in the name of simplicity.
{Now that does sound like Darling.}


Tax credits if you recycle over 80% of your rubbish.
{More likely a bin tax.}

An emergency budget that responds to the new realities and needs of Britain today.
{If you remove 'emergency' and replace with 'fair' and add 'future' in front of needs then i think you have the chancellor's exact description of his work.}

So complicated that you wont know if you are better off or not until after the election.

A fantastic response anon@9.30.
I commend this budget to the house.

I travel to france on hols twice a year and have the deep pleasure of paying about 300 euro on road tolls each time.

France lies between spain and england and the rest of europe.

I am sure someone can come up with a cunning plan.

PS I could tell you a story about a mushroom-cloud that was visible from 'Boro - indeed, from Darlngton - over a beer one day

I remember lazily looking at the spell checker underline and the alternative option was middlebrow.

(this may be unfair, but it can be fairly grim: but things like this don't help. I still have a soft spot for the place - provided I can stay here)

back to the thread ... you've certainly upped the ante over the Thurday night quiz, Bill !

much as I hope it would be a Badger-Budget, I rather fear it will be Mandelson's

I wonder if Darling will be able to keep a straight face ? we should open a book on Sterling ...

Anonymous said...
This comment has been removed by a blog administrator.
1:33 am

March 24th budget.
We will have to guess the cunning plan from the Brownadder.

Male sexual - if you want to advertise i'm afraid there is a fee.
Bye bye

could they go for a really big gamble
- the deficit is something to take seriously
- we are the grown up party that will take responsibility and actions
- unlike the do-nothing Tories who, just as in the 2008 crisis are paralysed with no ideas

and here is what we will do-
- 200 quangoes we are abolishing
- nhs computer and id cards all postponed
- etc.

thus completely wrong-footing the Tories who suddenly look spineless: they were the one who should have been saying all this, but were too scared.

No, it's not like Brown to be brave, but these are strange times and they may not have much to lose. It also lays the ground for 2014 'the tories should have done the brave things we laid out in the budget of 2010'