Financial Discipline - How To Sort The Economy In One Easy Lesson 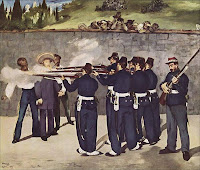 Here's how it's done - the North Korean way.

North Korea has executed a senior official blamed for currency reforms that damaged the already ailing economy. Pak Nam-gi was killed by firing squad last week …the Workers Party chief for planning and the economy was put to death as "a son of a bourgeois conspiring to infiltrate the ranks of revolutionaries to destroy the national economy"

Here in the UK, the great improvement in local government finances started when Town Hall chief executives became personally responsible for balancing the books. We know this works.

We also know that someone has infiltrated our ranks and destroyed our national economy. I am fairly confident Gordon Brown qualifies as a 'son of a bourgeois', and although retrospective legislation is generally frowned upon in polite circles, an exception can surely be made.

In any event these should be the terms upon which George Osborne is engaged in May.

The good news is that Gordon has taken action to ensure he doesn't make mistakes with sums again.

I approve of the conclusions you have drawn...

"I'm ready to continue commanding the revolution from 2009 at least until 2019, if the people want me to," the leftist president said, having promoted the amendment with the argument that only his permanence in power could guarantee the survival of the process of change that he has led since February 1999..

Going by Radio4 last night (PM) when a prize pair of Labour activists were interviewed Gordon can do no wrong, just like his mate Blair before him.

The old dears gurgled away in delight at Blair's visit to them in 1997; held out for a visit from Gordon, but started sucking lemons at the prospect of Cameron or Clegg.

The waft of oleaginous sycophancy from the BBC was overpowering. Clearly, these brain dead tribalists had been fed to the BBC by Labour and the BBC are too dim or too biased to smell a rat.

But if this is the way the election is to be carried on, far from the firing squad for Gordon, he will get re-elected.

although retrospective legislation is generally frowned upon in polite circles,

But Gordon Brown doesn't move in polite circles, nor has he shunned retrospective legislation. He decries the existence of one or the impropriety of the other. As he lives so shall...

It is my firm belief that many Labour politicians hate Britain and are out to deliberately damage her.

Electro-Kevin said... "It is my firm belief that many Labour politicians hate Britain and are out to deliberately damage her."

It is worse than that: Labour damages Britain but the tribalists are completely blind to it.

You know that if the Tories had done one tenth of the damage Labour has done, for example Brown's pensions raid, the Zanu fellow travelers would be rioting on the streets.

I have been calling for the death penalty for members of the Labour government for ages.

Once the merde happens, this may be the only way to reasure the financial markets that the insane fiscal policies of Labour have gone.


It would do wonders for consumer spending too.