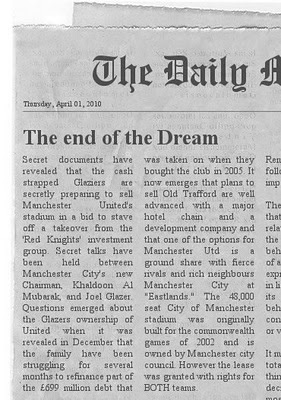 Newspapers today have revealed that the cash strapped Glaziers are secretly preparing to sell Manchester United's stadium in a bid to stave off a takeover from the 'Red Knights' investment group. The investment group that last week said it would not bid before the end of the season has now made a ' ubstantial' private offer to the club's owners.
Secret talks have been held between Manchester City's new Chairman, Khaldoon Al Mubarak, and Joel Glazer.

Questions emerged about the Glazers ownership of United when it was revealed in December that the family have been struggling for several months to refinance part of the £699 million debt that was taken on when they bought the club in 2005. It now emerges that plans to sell Old Trafford are well advanced with a major hotel chain and a development company and that one of the options for Manchester Utd is a ground share with fierce rivals and rich neighbours Manchester City at "Eastlands."

The 48,000 seat City of Manchester stadium was originally built for the commonwealth games of 2002 and is owned by Manchester city council. However the lease was granted with rights for BOTH teams. The city council felt they had to allow Manchester United an option on the ground in order to show fairness to both sets of rival supporters. But, with the spectacular ‘Theatre of Dreams’ at Old Trafford it was thought that United would never use this option.
But now, with an unwelcome takeover and the credit crunch putting an intolerable strain on the finances it seems that the Glaziers may just do the unthinkable.

We spoke to the planning office and they said there were a number of issues that needed to be cleared. Crowd control and parking issues and the fact that the Eastland stadium would not hold all of Man Utd's current season ticket holders. It is thought that United would restrict its season ticket holders for the 2011 season. More news later.
Posted by Bill Quango MP

The rumour I heard was that United will be increasing revenue by playing Rugby League on Friday night and Footie on the Saturday.

Nah, the real secret deal is the one going on that will see Old Trafford being put up as the first prize in a "millionaires lottery" - each ticket will cost £500,000 each and 10,000 will be up for sale - the grand draw will take place on the pitch just before kick off in the World Cup final in July - with Tony Blair drawing the winning ticket .....

What paper is the article from, please?

It may be an April Foul, if so yellow card, but may I suggest that Man U ground share with Torquay United and Man City with Berwick Rangers?

As for Rugby League, any Manc of a certain knows that the "Red Devils" are, in fact, Salford Rugby League Club. A certain football brand^h^h^h^h^h club nicked their nickname.

Mancs of a certain age also know that were it not for City renting Maine Road after the war to United, they would have gone under. Indeed, the club arranged bucket collections at games to help out United.

I often wish we hadn't bothered!