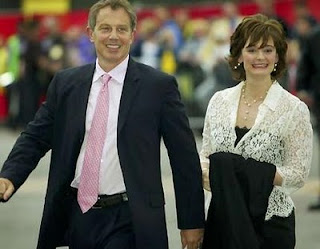 Political and business memoirs like to have a flavour of the character or their political ideals contained within the title. President Obama's Audacity of Hope for instance. The ever dull John Major couldn't even manage a book title. -John Major - The auto biography. thrilling!

This weeks game is to devise more realistic titles for memoirs.

The Course of my life - Edward Heath

BQ offers
- Edward Heath-Fingers in my ears
- Don't you ever get tired of being wrong? -Tony Benn
- Vidal Sassoon and me - Ann Widdecombe
- To Hull and back - John Prescott
- John Major - The Autobiography
- What have I done? - David Owen
- Taking the piss - Tony Blair
- Wide enough for both feet - Cherie Blair
Posted by Bill Quango MP

Cherie Blair: How to look younger and thinner than you really are by using Adobe Photoshop

John Prescott: Prezza. My Story: this will make you feel sick

and in the worst possible taste...

Mark Eaten: Oh Shit - How one MP survived politics and turning forty with the help of rent boys

How to grin and lie through your teeth by
Antonius B'Liar

"Next stop, the Universe!"

Or, on a slightly different topic:

Oh, and an obvious one (though not from that list above):

Gordon Bruin - Feel the Honesty and Fake It Anyway.

Michael Martin - Feel the Cash and Take It Anyway.

Edward Heath - Everyone loves a sailor except the Tory party.

Tony Benn - On the re cord.

Gordon Brown - I saved the world and other fairy stories.

Mervyn King - Darling we can't go on like this

Gordon Brown - Where to buy top quality stationery that lasts

Gordon Brown - How I saved the Wuld following the Globbal Bonking Crisuss.

And finally, one that is not original but is my personal favourite

Commissioner Ian Blair - "I was Only Following Orders."

Fred Goodwin - "Laughing all the way from the bank."

I vote for Cliff Hanger's "Peter Mandelson - Machiavelli's 'The Ponce.'"

My life cruising round bouys

All my life on tape. Apart from the truth.

john major was my bitch

The life of pi

A life in bondage - but not to the Tories

I coudda been a contender

You can fool them all, all the time
Transform yourself into a revered world leader in 7 steps.

So far top five are

Heath: My Life Was A Curse
Benn: My Big Bristols
Widdecombe: I Was Always Right
Major: The Autopilot
Owen: Time To Dissect
Blair: Offshore And Proud Of It.
Cherie: Speke Off (this is a strictly scouse joke).

Prescott: Pulling My Pud With Pauline.

How about??
Ian Duncan Smith - an Autobiography
By anonymous.