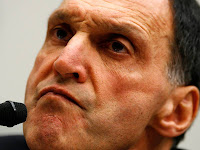 When the Lehmans ‘Repo 105’ story broke last week, CU noted the similarities with Enron. There are indeed some similarities – the bullying of external accountants to get dodgy treatments waived through; the reliance on convenient legal opinions - but there’s an even more compelling parallel. It’s WorldCom and the halfwit Bernie Ebbers, now languishing in gaol.

WorldCom, you may recall, resorted to the laughable expedient of capitalising $ 6 billion of expense - the simplest profit-doctoring scam imaginable. And the Lehmans Repo trick isn't at all complicated either.

Enron’s schemes, by contrast, were mind-boggling. Starting with ultra-complex (but legitimate) securitisations, Ken Lay’s boys moved on by degrees to transactions the structure of which even some investment banks found it hard to fathom. (“Actually unfathomable”, according to one academic.)

Everything about Lehman’s, from Dick “the worst US chief executive of all time” Fuld down, reeks of rank amateurism! Move up Bernie, you may have a new cell-mate.

How different are all these accounting fiddles from the Special Liquidity Scheme then Nick?

I might be barking up the wrong tree here, but isn't SLS (+ mark to makebelieve) just a longer term balance sheet fiddle?

Brown learned the Enron lessons well: almost anything can be put off until the morrow

until the Sterling crisis, that is ...

When I studied accounting back in high school and a bit at university I was always taught that the purpose of financial accounts was to provide an accurate snapshot of an entity at a particular point in time in order that people (management, investors etc) can better make decisions. A score sheet of sorts.

Accountants and auditors have to my way of thinking sold their professional sole to their paymaster employers and clients too often by creating and signing off on accounts which are fundamentally misleading to all those that might wish to use them.

My question is this: has it always been thus - i.e. have accountants always been shonky and unreliable or have things gotten worse recently?

FWIW - in that last paragraph I meant to say "accounts" rather than "accountants".

It's funny you mention a sterling crisis, was eyeing up these interest rate derivatives on my spread betting account tonight and thinking about what set of circumstances would cause LIBOR to rise and when.

Of course, I'm tempted to just short June gilt futures over the budget/election (or
would that tempt me to give Cleggy my vote) but a sudden bout of QE could come into play.

However, if this time around QE does not support sterling as all manner of sterling bonds/shares etc get dumped like they did after Lehman - then what?

Would they panic on inflation/full scale rout below parity with the Euro and raise the repo rate?

Therefore would September Short Sterling futures be a low risk way of playing this with a potentially high reward?

They are hardly going to cut the repo rate are they? The other thing is Basel 3, if banks are going to have to keep a wall of cash at the BofE, how long before they lobby for better interest?

the philosophy of what/who accounts are for is not uncontentious

and what investors (should) want from accounts is yet another thing

(I know quite a bit about this, having worked for *ahem* Enron - and even I find it hard to make definitive judgments from the published accounts of other companies' trading books, even in the US where disclosure was quite detailed before the credit crunch, when governments were keen to allow companies to hide their MTM valuations ...)

many professionals have indeed sold their souls; it's the lawyers that seem to have the trick of getting away with it - see the different outcomes for Andersens on the one hand, and Enron's lawyers on the other

Steven - let's see what Mr CU has to say on that

Nick - thanks for the reply. Strangely enough I actually became a lawyer and I can assure you that all of us are whiter than pure snow!

As far a law goes I started in mid-late 90s in a big firm in the Antipodes (although I did work in the City of London for a few years) and I think that even in the last 15 years or so things have changed subtly and not for the better.

When I started your duty to do your best for the client was a key focus but the old timers would also harp on about other duties: such as your duty to the courts, and your duty to your fellow members of the profession.

There was a sense that you had joined a special club which had arcane rules of integrity over and above those of a businessman.

Whilst not gone I think some of those values have been chipped away at as law has increasing become a business driven more and more by maximizing fees and PEP (profit per equity partner). The blackberry has been a disaster meaning that you're always at work 24/7 365 - whether this is part of it I don't know but it certainly kills the enjoyment.

@mark, 10:44 PM:- My question is this: has it always been thus - i.e. have accountants always been shonky and unreliable or have things gotten worse recently?

I think you only need to read a bit about Robert Maxwell to see that lawyers and accountants have been more than a tad "shonky" for some while!