How fare the Gold bugs? 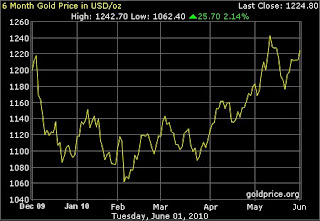 James Higham has asked my views on Gold. It is a long time since I wrote on the Gold price. In 2006-8 I was a huge holder of gold, it was my biggest asset by far and it did well during that time too - in both ETF's and Funds. Subsequently I shorted it through the financial crisis and timed a repurchase well at $700 an ounce. Then I sold out at $900 an ounce to get into shares at the beginning of 2009.

Now on reviewing the above I see that the calls made were all good. Even the sale at $900 was OK, because although I missed another 50% increase my shares that I bought at that time went up over 300%.

But now to today, where is Gold going now? It is flat on the year so far.

Well, the end game for the West is still inflation, in the UK we seem to be getting there early. Massive debts can't be paid and the in some ways the most equal way of sharing out the remaining wealth will be through a period of high inflation. Much like the 1970's. In fact we are going to have stagflation, a prediction made here long before the financial crisis.

As such, Gold is going to be a good store of value, but then again Shares will be too as they outpace inflation. Indeed anything that is not cash is going to be a good investment. So Gold will go higher, maybe even to $2000 at some point next year (one for the 2010 predictions), but other investments will be too. On the other hand, if the World Economy collapses and we do end up with deflation then Gold will only do OK relative to other assets.

With this in mind I own shares in (potential) Gold miners such as EMED, but am not heavily into Gold. I prefer Oil, it has more practical use and will only get more expensive as we pass peak oil. Co-Capitalist Nick Drew takes a very different view. Given he is more successful and wise than me, probably best you read his posts on Gold too!

(The real trick is going to be to get debt now, fixed at a good rate, that I can then invest in more profitable ventures. Normally I would be erring to get free from debt slavery, but not now. Just as in March 2009 I called to buy shares, now I will try to fix debt for the inflation ride to come - thinking of it as my revenge on the Banks).
Posted by CityUnslicker

As I wrote elsewhere a few days ago, my local goldsmith has, since about the middle of last year, had a large poster in his window yelling SELL US YOUR GOLD. That poster was taken down last weekend and I wondered why. I passed that way again today and the window is now covered in posters declaring MIDDSUMMER GOLD SALE and offering price "reductions" to potential purchasers.

Since I assume these fellows know their business, my interpretation is that last year when gold was around USD 850 they were buying it up, and now it is around USD 1100 they feel that the price is due to drop and they want to unload their stocks while the going is good and cash in their profits. When the sell-us-your-gold poster reappears, as it surely will one of these days, I shall consider buying some, sit and watch as the price increases for a few months and then cash in at the appropriate moment.

Or am I just being cynical?

Do you not think with euro uncertainties etc, stocks will remain stagnant/ bear in the next 9 - 12 months? There also seems to be issues with European banks potentially having liquidity problems. Looking at your share picks from earlier months some have had massive drops (e.g. EMED 30% +-)

GG - yes, but this is also cyclical. The summer is the worst time of year for Gold and it picks up with Indian demand into September/October

M - Shares are very unpredictable too. I agree some of my main investmets are down quite a lot, but overall I am up 13% - more than Gold. MNR and IAE more than make up for GKP and EMED. The FTSE would have to end the year at below 5000 for me to be facing a loss.
I think shares will recover and the Euro issue will die down - of course that is my long bet and I may be wrong.
Gold is a good asset to hold, I just prefer riskier assets. I still think the FTSE will end the year nearer 6000 than 5000.

I am still long gold, but liquidated quite a bit recently by way of profit-taking (partly an FX judgment)

as you know my slogan is: gold is a hedge against Bad News (not inflation), of which There May Be More To Come ...

am looking closely at silver

will be interested in oil in due course, but the global economic recovery needs to be unequivocal first, and the tendency towards contango ironed out

as I commented yesterday, the fact that the BP nonsense hasn't caused oil price to go up is quite a reflection on global economic weakness

If gold is not a hedge for inflation what would you use? FTSE in uncertain economic times. I am be pessimistic, but I do think there are still going to be further Euro issues in the coming months. that is why I am not convinced shares are the best option!

I have switched all my savings out of government bonds and am now preparing to rinse it all in fear of it becoming worthless. If the economy collapses at least I'll have a nice thick carpet to mooch about on.

m @ 11:07 - as you know there can be no financial advice given around here, but for myself I like NS&I tax-free RPI+1% bonds

M - get shor perhaps? One thing QE has doen is make all asset classes more aligned. The 2008 financial crash hit everything - except short positions.

Disagree about inflation CU. Maybe if you work in the city and headhunters are bidding up your salary all the time.

For the rest of us it's The Squeeze

So I'm going to start a blog to tell y'all about it.

High yield telecoms/pharmas(5-10% available) should continue to provide a real return for some time to come. Cyclicals are not recommended.

As for gold shares yes. Picking the right ones is more difficult. I speak as a holder of Agnico Eagle(huge underperformer),Randgold and Centamin.

A detailed search on Google for cash 4 gold reviews reveals honest stories of people who have had great experiences selling gold as well as have bad experiences to talk about.