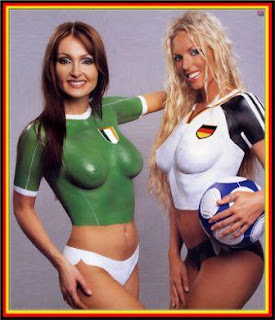 Cameron -{ England.}
Limps along not pleasing many. Everyone hopes he has a lot more to offer and the crowd believes he will come good, even though there is precious little sign of it. Through to the next round if only because of soft opposition.

Clegg. – {South Africa.}
Seriously outclassed at this level but everyone wants the Rainbow nation to do well. Fails to get out the group.

Miliband, Ed– {Greece.}
– Keep defending the old positions at all costs and make everything as dull as possible. Tries to sneak through to the next round as the others fail to notice he is even playing. Strategy fails and doesn't get through.

Osborne – {Uruguay} Much better than anyone expected despite the relative inexperience. Good enough to get to the next round.

Abbott – {Cameroon.}
What are they even doing there? Only got to be there in the first place because of ‘regional’ qualifying groups. Fails badly.

Balls – {France.}
Despite a great legacy really struggled and almost failed to qualify for the tournament at all. Had to cheat to get in.
Attacked the wrong targets, got confused. Fell out with everyone including himself. Did not manage to beat anyone and despite being tipped to be a major force finished bottom of the group and went home early.

Looks the part and is always talked of as a main contender yet somehow fails to convince. Predictable and lacklustre displays yet enough talent and support to get through to the final stages regardless.

Brown – {Scotland.}
No one has seen a peep of him since the competition began.

Potential world beater but prone to unbelievably silly tactics and nonsensical statements. Supporters think manager is a genius and possibly even a saint. Critics suspect he may be mad. Easily through to the next round.

Let me guess, you didn't watch any of the matches or you know very little about football.

Health care=red cross=Switzerland. Both pretty useless in the final reckoning.

Toby or not Toby said...

Gordon should be should Italy.
World cup holders that just couldn't get going. The tired old tactics were easily countered and they ended up meeting France at the airport.

No one has seen a peep of him since the competition began.

Heard a peep from him?