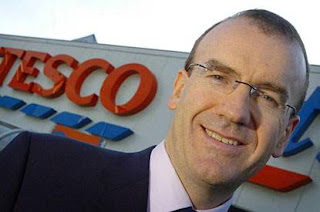 Terry Leahy is a businessman of rare quality. I have met few men of such towering ability and - equally significant - intellectual integrity, and readiness to take personal responsibility: no 'search for the scapegoat' when things went awry. They breed 'em at Tesco - Ian MacLaurin was pretty formidable, too.

"David Reid, the company chairman, said: 'Terry has made an unrivalled contribution over a prolonged period. He is undoubtedly one of the leading businessmen of his generation'.” You can say that again.

And he's retiring, aged only 55. Now it must be accepted that the Tories have not necessarily *ahem* benefited from some of its dealings with prominent figures from Tesco: Shirley Porter, this means you.

But this shouldn't stop Cameron acting fast. The Government needs the services of this man ! Act now.

What a difference he could make...no more beating about the bush just a lot of straight talking. Could this be the reason he's decided to quit Tesco maybe? He would make a great PM.

Much as I agree with the sentiment, would he really want to get involved in politics?

couldn't care less ! get him drunk, slip a shilling in his pocket and drag him off to the Policy Unit in shackles

Jan - welcome - I imagine 14 yrs at the Tesco helm is quite enough ... so he needs a new challenge !

No way. Quality would decline, quantity would decline and you be left with no taste in your mouth as far as public services are concerned, like Tesco's own brand products. It is only Tesco shareholders that have benefited imho; not the typical customer who is not smart enough to realise, not the staff (only 4 mins for a comfort break), not the suppliers nor the environment, although I am sure Mr Leahy will convince us otherwise. With interest rates having only one way to go and competitors moving down market, Mr Leahy is shrewd but I ain't a fan.

Well, we've had a world run by guns n oil, then by banks, I don't have any objection to giving supermarkets a go.

You never know, it might be as close as we ever get to utopia!

Sir Terry Leahy would be distinctly better than Lord Browne.

Lucy Neville-Rolfe was part of Hammond's much-touted Private Sector Productivity advisory panel, which was started in opposition but promised to continue should Tories win. With Hammond now at DfT and his opposition job allocated to Lib Dems, it is not clear what has become of the panel, however we can assume that Neville-Rolfe and other Tesco bods still hold significant policy making sway. There was reasonable hype about Leahy (also Sir Stuart Rose) taking Tory Peerages, and though they lost out to Wolfson, both men have this year relieved themselves of their positions at Tesco and M&S, leaving specultion rife that they will have plenty more time for advisory roles. Sir Stuart only rebutted Hislop's Question Time challenges (October 2009) of him being a 'Retail Tsar' under Cameron on the grounds that he was a busy man with far much to do at the moment...prior to resignation

ELP - ve-ery interesting, we shall watch and wait

measured - agree to disagree, I am with budgie and Steven