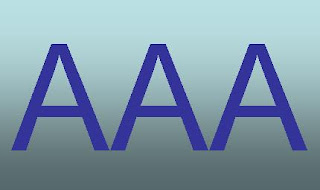 ... according to the Dagong Global Credit Rating Co, "China's first official credit rating agency", which has downrated us to AA- today. Cheeky buggers.

By contrast S&P continues to rate us AAA: Negative Outlook. George Osborne would probably have hoped for better, but they have doubts over growth projections and, frankly, everyone has their concerns.

Helpfully, Mr Pratley (sic) of the Grauniad tells George not to fret, seeing as how the rating agencies are rubbish. It's true, Nils, we've said so ourselves - but their usual sin is over-optimism, so I'm not sure this helps. The importance of the AAA is easy to forget, because we've enjoyed it for so long - but hard to overstate.

I once worked in the Treasury of an AAA-rated energy company (not Enron this time, needless to add). We agonised long and often over just how much it was really worth to us: perhaps we'd have done better loosening up a bit (e.g. by using project finance instead of funding everything ourselves). But we were highly cash-generative, and the odd point on the overnight overdraft wouldn't have mattered a hoot.

The UK is not in quite the same happy position. That Spending Review can't come quick enough and, as we've said before - no summer hols for Danny & George.

What gets me, is how they've attached the AAA rating to banks (and therefore mortgage borrowers) through the Credit Guarantee Scheme.

On one hand, if they don't renew the CGS and SLS interest rates will most likely shoot up and lending dry up.

On the other hand if they do renew all this funny money we have to start accounting for it as government debt under Maascricht rules and interest rates could shoot up and lending dry up.

Is that the printing press I hear in the background?

To quote Justin Stewart on Tuesday's (13th - around 9:50 in) 'Wake up to Money' on Radio 5 - "oh for heavens sake, [the ratings agencies] give us the marvelous opportunity of telling us yesterday's weather forecast"

And as the past few years have shown us, they aren't really all that good at it.

Steven-L, surely the interest rates charged to retail and to business are well above bank rate - so much so that it has effectively de-coupled?

BoE rate should have risen to meet the increased inflation. But it has been held back for the political expediency that it makes government loans cheaper to service.

In any case, if interest rates rise this will deter borrowing and attract more lenders, so curing the claimed lack of availability of 'funds'. It will be hard on borrowers, but it would also cure the excessive house prices (compared to long term average).

The 'bank rate' budgie (aka the overnight rate) only applies to the B of E borrowing from banks for one day. It is quite normal to have a yield curve, where rates rise the longer you are lending/borrowing for.

If you go on bondscape and look at what banks like Lloyds really pay for a 5 year loan (with no state backing) then go on the DMO credit guarantee scheme and look what they pay with state backing (or for retail savinsg which are also state backed) you will see that interest rates for consumers and businesses would actually be a bit higher but for the state backing of wholesale finance.

In terms of their balance sheets, if they attract more deposits (say people have money under the mattress or sell gold coins) these become a liability. They have to turn it into some sort of asset (i.e. lend it to someone) in order to pay any interest to the lender.

If borrowing dries up due to higher rates, the money multiplier slows and there will be less deposits as well as less loans. This is what they are afraid of, a deflationary spiral, this is why they keep telling the banks to 'lend, lend, lend' even though no one wants to take on more debt.

Steven-L, yes I know lending depends primarily on risk and time. Yet it seems to me that the ratio of BoE base rate to say a typical retail 25 year mortgage, is far higher now than it was 5, 10, or 15 years ago.

The normal way the economy has been controlled in the last few decades has been by the base rate (given broad money being relatively stable). We have inflation above 3%, therefore the base rate needs to be increased.

".. no one wants to take on more debt." I understood from business (from the FSB upwards in size) that loans for realistic projects were difficult to come by, ie there is not enough money being lent.

Increasing the base rate to correspondingly increase the retail rates (also thereby increasing the interest paid to depositors) would bring inflation down and bring borrowing and lending back into balance. Higher interest rates offset higher current risks. So we have come full circle.