Politics and the Military

Somehow it comes as a bit of a shock to see Cameron addressing cadets at Sandhurst, even if the political content of his speech was fairly anodyne. Notwithstanding your Montgomerys and Walkers, your Roses, Jacksons and Guthries, the British have managed the separation of politics and the military better than most.

Other countries don't have the same scruples in these matters. In 1985 I attended a hand-over between the outgoing and incoming commanders of a West German infantry brigade. The entire formation was drawn up on a huge parade square, around three sides of a huge central dias. The incoming one-star rode up dramatically on a white horse, and was received with great ceremony by his predecessor.

This latter then gave a lengthy speech, broadcast on a very adequate sound system. In the course of this harangue he expressed, inter alia, his displeasure at the leftist and unpatriotic tendencies of the Green Party in the region; and he went on to attack the local Lutheran pastor - by name! - for being a pacifist. Aside from the Brits present, nobody turned a hair: it was par for the course in the Bundesrepublik. 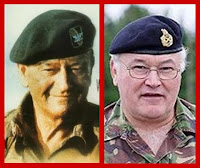 How unlike our own dear Army. Incidentally, the new Chief of the General Staff, General Sir Peter Wall, is an excellent man I know well from my own limited military career. In public he is gruff, dry, and minimalist in his pronouncements. Out of the limelight, he is a soldier's soldier, inspiring immediate confidence at all levels - think John Wayne in The Green Berets (in his leaner days Wall even looked like Wayne). He also makes an accomplished and fruity after-dinner speech. In private, of course.

He can probably handle the politics, too. And we'll need that.

One is not entirely sure that John Wayne is the best example to pick given his lack of military experience and extent of political engagement.

Ah how nice. The Walls are family friends with one of my fiancés. Small world!

My word verification was "adicit" which was somewhat offputting. You don't say!

Don't think it would hurt for the military to speak out a little more.

I cannot stand Cameron and was disappointed to see he was at RMAS.

He's there to counter the cuts he'll be making to top brass.

He won't pull our troops out of Afghanistan though he's given up the fight.

This man -on this and many issues- is most definitely not The One.

I would only be too happy with a comparison to the Duke.