Here at C@W we first did a post on Labour's Scorched Earth strategy in November 2007 - long before the financial crisis (and long before the phrase was being used more widely ;o) ).

Today I am going to see how credible this in. In that Post nick Drew wrote of the stupidity of trying to build too many houses, a useless energy policy and a proposal to make all children stay at school until 18. Typically uncosted measures from New Labour.

The real story though is in the macro-view of what Labour was seeking to do, especially after the economic collapse of 2008. The choice at this point was to repair the economy or to march on as if nothing had happened.

Here are a couple of graphs which provide some evidence:

This one is the UK budget deficit accrued each year as a percentage of GDP: 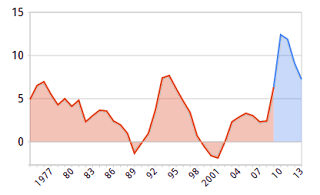 This second one shows the effect on the national debt of the recession.

Finally, the superb Nadeem Walayat shows the last forecasts made by Alistair Darling of the budget deficits, note the November 2008 forecasts, long after the recession had started.
From the above we can see that there was no attempt to reign in spending into the recession. Keynesiasm was tested in the 1970's and failed then monetarism was tested in the 1980's and worked. But Labour chose Keynesiam - but why? Could be that the spending was all on Labour votes? The two biggest recipients of public money are the NHS and the benefits system. Neither has faced any kind of reform, instead they have had spending increases in real terms for nearly a decade and this continued right up until Labour left office.
Rather than make cuts, Labour engaged in Quantitative Easing, a policy which did help to stabilise the economy (and may still yet do so if there is more), but was an alternative to reducing Government spending in 2008-10.
Then, as electoral doom approached, the foot was placed on the accelerator. For all the achievement of staving off financial doom in 2008 (and it was a possibility, mishandled still, but Darling and Brown at least did not fail in keeping the economic system alive), Brown and Darling saved the best till last in 2010. With the budget deficit out of control at 12% they simply put off a new spending round and changed the game to suit their electoral needs.
This last point is worth dwelling on, as there is no cogent explanation for this fudge at all, other than wanting to not discuss impending cuts and the serious situation the Country faced. it is the ultimate shoulder shrug to the people they were meant to be serving. I look forward to reading the memoirs of the two men to see what weasel words they can try and find to get out of this.
Finally, in the run up to the election, the years of spending to keep power meant that a last splurge was felt necessary. Both the Times and Guardian have decent lists of the last minute spending. Here the idea was to commit future Governments to spending that could not be easily reversed, making cuts in other, more essential areas, more likely.
It does seem as if that was all Labour new how to do, spend other people's money. They even had their own epitaph in the 'There's no money left' note left to David Laws. What is sick is that the joke was meant to be ironic.
Posted by CityUnslicker

This is an excellent series of posts which serve to remind us of the folly and flaws not just of the powerful within the Labour government, but of the "left" (ie in current terms 'statist') viewpoint in general. Yet you cannot ascertain motivation from facts alone.

I believe they simply could not help it; that their character flaws make the outcome inevitable.

Such statists are not prudent, they regard other people's money as their own; they are not 'builders', they pull to bits what they don't like then wonder why the entire edifice crumbles; they were proven bullies, fraudsters, manipulators and liars. But 'scorched earth'? - that is a matter of judgement.

Personally speaking I'm quite a fan of Keynesian theory.

Trouble is, when the great man was writing, governments were taking maybe 20-25% of GDP. Now it's over 50%, so we've effectively been running a 100% Keynesian boost for at least the past decade.

The rationale behind it is quite clear.

Labour's intend was not a successful Britain but a socialist one. They had nothing to lose by 'scorched earth' - saddle the incomers with a poison chalice ... or win power in order to continue with the programme.

A result for them either way.


It must be pointed out at all opportunities that we have a coalition - not a Tory govt. That it's not just Tory sour grapes but the truth that is motivating them and the LibDems beside them will concur.

What is going on is really quite simple, and it isn't really a conspiracy as such, but mostly an inherent result of how the Labour Party is organised internally.

To get into a position of power in the Labour Party takes a long, long time. To get to ministerial rank you pretty much have to have been at it since leaving university, and preferably to have been climbing the ladder during your university days. That means that all Labour ministers are well and truly steeped in Labour doctrine, and are fully immersed in the Labour Bubble, to the extent that their conception of the real world is largely fantasy (this can be observed by looking at the Labour Party now; the members simply cannot understand how deeply and thoroughly they are loathed). Labour ministers get their ideas from other Labour ministers and aides, and as such draw insight from a very biased pool.

Gordon Brown's witterings provide a fairly good insight into Labour thinking on the economy: he sincerely believes that the economy is there to fund the government, and money not spent by the government somehow doesn't count. Gordon, and most of Labour are extremely Government-centric in their thinking and work under the illusion that everything that happens that isn't under Government control is somehow not really very important.

The other cultural idea that Labour seem to have, along with all Socialists, is that We Know Best. Since they know best, they therefore try to coerce the population into following reams of micro-managing little rules. If a severely horrible event happens and it cannot be shown that those responsible broke the rules yet acted in a grossly idiotic fashion, then this cultural mindset falls back on stating that those responsible will be re-trained, rather than punished for stupidity.

All this stupidity and arrogance more or less precludes any grand conspiracy being present in the Labour ranks. The lead-up to the last election wasn't really a huge malign arrangement to land the Tories in the smelly; there may have been a good few minor such spoiling moves, but there wasn't a grand one. What there was, was just the normal Labour omnipresent screw-up; they really don't grasp how overspending lands them in the smelly and don't ever see the need to rein in spending. As Thatcher said, Socialists always eventually run out of other peoples' money.

Get Genuine Ways To Earn Money Online With Payment Proofs. You Can Learn How To Make Money With Traffic Improvement Tips and make $100 every day .So That You Don't Waste Your Time And Money.more details visit ,click here