As posted previously, I am very cynical about the German moves of the past few weeks. They have not helped their fellow eurozone member at all; in fact quite the opposite. 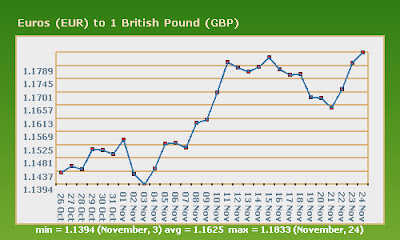 However buried in here is bad news for the UK too. The bearish commentariat which passes for a financial press in the UK tried hard to look down on GDP numbers that were at 0.8% for Q3. The really good sign was that exports were finally picking up, giving the UK an out from trying to grow its already bloated services sector or increase Government spending.
So the really big downside to the Euroe crisis is the effect on the euro/£ exchange rate, which has been quite precipitous for the last month and shows now sign of abating. German exports are getting an Irish markdown at the moment making it harder for the UK to compete commercially in Europe. Throwing us back to square one again in terms fo battling our fiscal deficit....
These currency wars are very complex, are they not?
Posted by CityUnslicker

Time for BofE to announce more QE to crash the £ perhaps??

Might need a bit more massaging of the inflation figures to keep all MPC members in line, and keep the sheep in order...kettling by the blue-clad morons won't work.

What about reducing Corp tax to 10% too. That should piss-off the krauts and frogs.

And a bit less CapGains on houses tax too.

Time for Belgium to join the bailout queue, so we better move quickly.

Hey, Call-Me-Dave, are you listening?

As for me being happy....
Mind your own fucking business. ....get gov't O U T of the lives of folks.

Gov't should never represent more than 25% !

Sems to me that the BRICS were kept out of the basket so we could have this choreography of currency dances without the complications of currencies outside the control of the major players.

That leaves them free to cannibalize each other via OTC actions, in turn ensuring that bailed-out peripheral states can never leave the Euro without an economic crash.

So we have a yo-yo for each country in turn and smart money boyz profit each way each time.

speaking as someone who is busily exporting to Germany right now ...

... I am obviously obliged to price in €: how I manage my currency risk is my affair

If the Germans want a cheap Euro, why do they not simply allow the ECB to solve the debt crisis by printing lots of new cash?

BE - because they don't want inflation but they love mercantilism.

But they can dampen domestic inflation easily while allowing their international competitiveness to improve with a falling Euro.

'Bearish' - is that a polite way of saying 'communist'?

Anon 10.48 - fine points. however whilst the new currencies insist on dollar pegs they are hoist on their own petard.

ND - hedging of course, but tell me does this reduce yor risk or add to it? Certainly it adds to costs...

BE - print cash and manage down domestic inflation...sounds like quite an achievement to get there.