Iraqi Government - still not there after 8 months 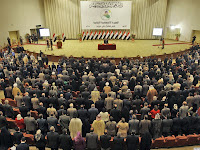 It took Cameron and Clegg just 4 days to sort out a coalition agreement. However in Iraq it has taken eight months and counting. To be fair, the result was so close in Iraq that the minor parties don't have enough sway to form a Government with just one side.
Eight months is apparently a new world record for trying to form a Government after an election. In a bigger sense it shows just how hard it is for Country's to adjust after Despotism, War and then occupation. In Iraq too the spoils are enormous as the Country sits on massive oil reserves and a world thirsty for access to them.

Thursday is yet another deadline in the process, when Parliament meets to discuss the key posts of the new Government. Hopefully a deal can be struck but the bargaining is intense and as far as can be seen publicly a deal is a way off.

If the Kurdish faction, the equivalent of the Liberal Democrats, can see sense they will abandon the Presidency and take over the oil ministry in order that they can secure their share of the new oil revenues.

I hope they can put a Government together this week as the violence is beginning to spiral again.
Posted by CityUnslicker

Do the Belgians have a government yet? They seem to have been without for a sight longer than 8 months.

The country may sit on huge oil reserves, but I hope the resources don't just get divvied up between ministers?

Don't be silly BE, the US and UK governments get to share in it too, to cover the cost of their liberation initiative.