Its growth Jim, But not as we know it.. 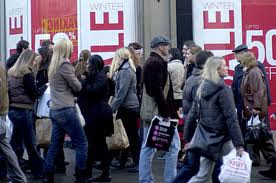 Hooray! Except... what have we been saying here for months about the inflationary pressures on certain sections of the retail industry? Was it 'Both grocers an clothing have been badly hit by the rise in the cost of commodities, grain and cotton.."

The cotton 15 year high price was in May, when the last of the Xmas stock was bought. Since then India has put further export restrictions on the fibre, which can only make things worse. China has released its grain reserves onto the market to try and reduce food inflation in China, CPI running at 4.4% there.

Rises in sales do not necessarily mean an increase in footfall and higher quantity consumer spending or greater profits. If anything the high street is quiet. Only the last two weeks have sen the sort of movement that indicates a good Christmas, and, in general, not by enough.
The December figures will be helped a little by the beat the Vat spending, but not until companies report profits in 2011 will we really know what's occurred.

Not that that will stop the newspapers running their seasonal 'shoppers shake off austerity and beat the Vatman' story. They will print the till receipt year on year figures and that will look good..even though it probably isn't.

{Big seller is the cuddle chimp. And the musical snowblower. {it plays jingle bells and has lights .} BQ Industries, somewhat unexpectedly, sold out of those in October.
The more traditional 'Better homes than yours ' type items, like tall pyramid advent candles and top quality wrapping paper and bows, etc, have barely moved as yet.
Posted by Bill Quango MP

Also if a growth in sales is concurrent with a growth in debt, then there's not really any growth.

You can't get hold of Toffee the Pony anywhere & that toy is £50.

Why is paper suddenly so expensive. Where do we buy it from? I assumed it was the USA but maybe its Brazil.

Expect so anon.
Still trying to separate the ad men's spin from the actual on toys.
For example Flitter fairies are 'the rotocopter for girls! A gift that any girl must have. ' But they're everywhere, and don't look to be in the top 10 come boxing day.

"If anything the high street is quiet. Only the last two weeks have sen the sort of movement that indicates a good Christmas, and, in general, not by enough."

Our high street is already running with piss and vomit and is heaving with knickerless tarts.

It's promissing to be the best Christmass yet !

Covent Garden and the West End were heaving this afternoon.

I think things are less bad than the headlines and miseries suggest.

The west end and Covent garden are tourist led. They are doing very well on travellers who see prices up to 30% less than in their own countries. And that's without the sales and promotions. Just the devaluation of sterling.

London is a special case and its shops have been booming for the last two years.

Outlets in Bond Street, Oxford Street and Regent Street have bucked the national trend, recording sales increases of 10% in the past 12 months, compared with a 1.2% rise across Britain to the end of June.

But... this week will be critical.
BQ industries is showing about 25% less sales so far. That's a lot to make up. If it doesn't happen from tomorrow, then it won't happen at all.

{I managed a flagship store in Oxford Street during the last tourist boom.. That single store took the equivalent amount of money to the next 10 outside of London largest stores combined. And they included Superstores in Birmingham, Cardiff, Bristol Manchester and Glasgow. Its something to behold when the stock sells faster than it can physically be replenished.

As a tip..West End will heave to beyond bursting this week and next week. By the 15th December it starts to really slow down. Then the shopping centres take over.
Its because West End is a day out/ shopping trip destination. As Christmas draws nearer time becomes more of a factor and people stay closer to home.
I haven't been to Bluewater in a few years but that used to be the same. Peak was two weeks before Christmas. Whereas a store in say a Westfield, or Trafford Centre might record record days from the 15th to 23rd.