Mervyn King Thinks a Forward Curve is a Forecast 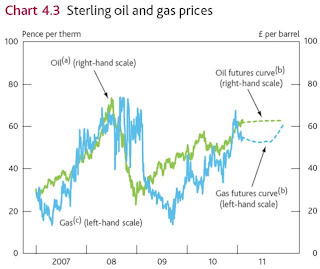 Mervyn King is a moron, and I am very worried. Introducing the latest BoE Inflation Report, he delivers himself of the following tripe:

"In the light of futures prices for energy, food and other commodities, the Committee judges that a reasonable central view is that measured inflation will begin to fall back next year."

"The MPC’s central forecast is conditioned on futures prices for commodities, which are broadly flat. … Energy prices are assumed to evolve broadly in line with the paths implied by futures markets over the forecast period."

Saints preserve us ! Just because the word "forward" sounds just a teeny weeny bit like "forecast" - you know, two syllables, starting with F-O-R ? Would you care to check the evolution of past forward curves - for any commodity you like to mention - and subsequent spot-prices ? Forward curves are lousy estimators of future prices: if they were any good as estimators, who would ever need a hedge ?

Email ThisBlogThis!Share to TwitterShare to FacebookShare to Pinterest
Labels: Bank of England, Inflation

I'm afraid I disagree with you and agree with him. What is a better
indicator of likely future interest rates based on all the information
currently available?

Paul, the forward price of commodities or long term bonds is just today's price plus or minus a bit.

can see I shall need to pen a longer post on this topic !

Merv actually signals plenty to investors and is far more honest than the popinjays across town in Westminster. He pretty much told peeps to pile into index-linked a few months before NS&I pulled them.

Any evidence that forecasts are better predictors than forward curves?

Mr Grano - most forecasts are absolute crap, beyond the very very short term (when it hardly counts)

empiricism should be our first guide through this maze, and neither 'professional' forecasts nor forward curves offer any sort of track record at all as regards predictive power

(though there are plenty examples of stopped-clock syndrome, or "hey-I-threw-3-heads-in-a-row")

anon - OK, he may have other merits I have overlooked in this post !

Britain has huge debts. The Government and the BofE want to inflate the economy to make the debts more manageable. This is why they fear deflation more than anything else; deflation would mean an unending debt burden.

Unfortunately this inflationary exercise is punishing the prudent savers in our society in favour of the more reckless borrowers.

This should be making everyday folk angry, but when more than 50% of the economy is driven by the public sector this is like asking turkeys to vote for Christmas.

Nick, so called the great and the good all knowledgeable folks and institutions have repaetedly got their forcasts, it does not really deceive the folks on the coal face metaphorically speaking, they can see first hand what is going on, whether it is telling government what they want to hear, I do not know, it could be called the spin machine. When they tell these stories they may actually believe what they say, the CBI in the eighties came out with some howlers. I am afraid you have to take it as it appears to you and ignore the spin.

My forecast is that for the next couple of years the purchasing power of my salary is going to drop substantially in order to get Britain out of its debt/competitiveness trap.

It's going to hurt, but I can't forecast any alternative.

@BE
We all forecast that, but your loss forecast will be too low! You forgot to add additional VAT, additional fuel duty(+VAT), additional alcohol duties(+VAT) other various un-announced taxes e.g. on your electricity bill.

And that "Graph" is awful - It could have been drawn by a ten year old! (and what happened next children?)

On that subject I saw a (math) joke book to download today the title was "The square root of 4 to a million decimal places". I wonder how many of our youth would understand "get" the title?

I suspect it is all a bit of cover for keeping interest rates low, suppressing the value of the pound, giving the economy every chance to recover and letting inflation erode Government debt. Essentially, taking the answer you want and working backwards from there.

Mervyn is a fool and has been for a long time; on the other hand great for helping with making contrarian calls.

a) He raised rates just as the UK was entereing its worst post-war recession.
b)now he says keep calm as the inflation thing is not so bad.

Time to fix the mortgages again.