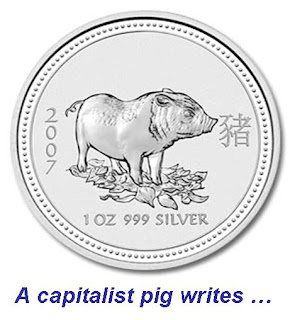 A couple of days ago one of our esteemed anons asked about alternatives for trading the silver market in the current chaotic conditions. We need immediately to register a couple of important points:
(a) we give no advice here & everyone must figure things out for themselves; (b) 'chaotic' is often a good reason for steering clear of anything, n'est-ce pas ?

Anon was raising issues around the potential for physical default if what many judge to be a short squeeze on COMEX silver persists. Anon and others seem to think the situation may be containable in March but could go critical in May. I don't have an opinion on that. But the old question of how reliable is paper? is worth rehearsing again (click on the C@W 'Trading' bar & go back to Silver posts beginning January 11). And here I do have an opinion: if you are hedging against Bad News (my personal reason for being long bullion), and that includes long-heralded market breakdowns - why would you rely on a paper hedge ?

If the answer comes - because it is in backwardation (as it has been recently) - we must immediately retort: of course it is, there's a premium on the physical ! And that's because ... etc etc. Indeed, it is rumoured that some holders of futures are being paid a premium - or 'bribed', as we might say - to accept cash settlement at delivery instead of physical. Have a look at realized prices vs average 'market' prices (the amusingly-named London PM Fix !) for 4th Qtr 2010 as reported by Hecla Mining - hat-tip Anon.

In any case, the same investors were using paper when it was in contango, which is considered 'usual' for precious metals because they have a cost-of-carry but pay no dividend. I can only presume that people find it so much easier to trade & perhaps more significantly, get leverage, using forwards instead of physicals. Seems like a lousy trade-off to me.

Anon went on to say:

"My thoughts are Junior Miners for investment purposes, but worries about price discovery exist"

Which brings us to oil, and CU's post of last week. Oil goes up, and AIM-listed oil stocks go down! How can this be?? All I can say is that a couple of years ago I researched the correlation between gold mining stocks and gold itself, and it was very poor indeed.

So disconnected are the bullion markets from precious-metals mining companies, that the spread between the two is a recognised trade! One of the reasons may be that miners et al are often hedged, i.e. they are not actually exposed to the price of the underlying at all. Then again, just as Anon worries about price discovery, I worry that these bastards lie through their teeth when it comes to disclosing whether they are hedged or not. (This is certainly true of some energy companies, the sector I know best.)

To sum up: the poor correlation between commodities & commodity producers may be counter-intuitive, but when it comes to money, to hell with a priori reasoning - go with empiricism ! Sticking to facts is the capitalist way.


PS if any of this is gobbledegook, give a shout in the comments & I may be able to clarify.
Posted by Nick Drew

That is part of the explanation.

Another part is that historically, a signal of a coming paper beat-down of PMs by the Bullion banks, usually prior to options expiry, is first, a Short raid on the miners...Canada operators are well known for this,... followed by a failure to deliver the cert, resulting in an almost permanent increase in the float. Of course that is criminal, but US regulators seem not to give a shite!

Hedged? I try and read all details on Co webs. It is normally well hidden. I have recently seen brokerage coverage, and valuations of Cos that show that brokers themselves are not aware of hedging.

Having said that, hedging is becoming more rare, as PM prices are moving up.

Experienced analysts are anticipating a 66% increase in the HUI this year as the PM prices create mining cash cows, and "short the miners" get squeezed.

Nick, just out of interest, take a look at Mawson Resources.

It's listed on Toronto, and the ticker is MAW.

It's a play on Uranium and Gold, and the recent discoveries are totally off the scale! Mindboggling!

Management his quickly been re-aligned!

They also have interests elsewhere.

NB. This is NOT advice, do your own DD.

Do you want my thoughts for an article?

I can post here if you want to collect.

Bill - thanks, yes I read TF's stuff (most entertaining as well as edifying) - & thanks also for the reverse link

anon - go ahead, we sometimes carry guest posts & this is an interesting topic

It was a awe-inspiring post and it has a significant meaning and thanks for sharing the information.Would love to read your next post too......
Thanks
Regards
Commodity tips