One more shallow pot-hole in England's road to the Grand Slam ahead. Poor old Andy Robinson is continually telling us he "doesn't understand losing", which can only mean he's a slow learner.

This is a game where England need to run amok. Defences are good these days but they should really put 40 points on Scotl 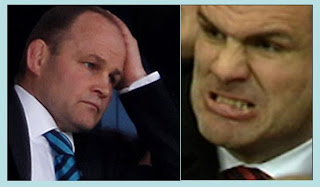 and - less than 30 isn't good enough in World Cup year. Zara will just have to be tactful to her mother afterwards.

doesnt take much to disrupt the best laid rugby plans is all im saying.

what I'm saying, is that in a WC build-up period, a young & confident team like this has to be able to go on a spree once in a while when the opportunity presents itself

France wasn't one, Ireland probably won't be, but Scotland (like Italy) seem to offer such an opportunity: how they take it will be a good indicator, IMHO

Bold talk given its only months since England were bullied by the Saffers. Still, we seem to have gone backwards since we gave the Boks a doing - badly missing Graeme Morrison if you ask me. And Robbo's achilles heel of selection has been exposed a bit too. In conclusion, a stuffing of the Scots is not unlikely, but the England class of 2011 still has a long way to go in terms of World Cup glory.

fair play, that was not impressive

ten points short of what was needed

(but it doesn't look like France are going to terrify anyone in the WC quarter-finals ...)