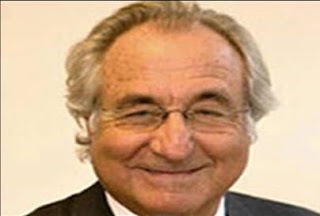 Madoff said deceiving investors for two decades had put him under severe strain. His prison therapist had assured him that he was not evil: “She said, 'You're absolutely not a sociopath. You have morals. You have remorse.' I am a good person. Everyone was greedy, I just went along.”

Email ThisBlogThis!Share to TwitterShare to FacebookShare to Pinterest
Labels: quote

So if you express remorse, you have morals? Huh?

This doesn't excuse him or Blair or Brown.

If he's under severe strain perhaps he is at heart a good person, bless his little cotton socks.

I haven't noticed any sign of severe strain amongst the politicians who have persuaded people here for 60+ years that public sector Ponzi-Pension or State Ponzi-Pension schemes were a good idea.

When I first heard the old tea leaf's name, I thought that guy was very aptly named, deliberate pyramid swindler, the trouble is there are more but they don't come to light until it is too late, the old addage "if it is too good to be true, it most likely to be so"

Hey ho - 'every one was doing it' is the definition of lack of morals. In any case everyone was not doing it.

then I think we are all agreed !

actually he does have one legitimate complaint, viz he's the only one to be banged up: & according to this, that's the way it will be