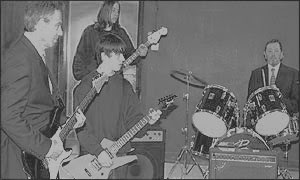 The Depleates were the most popular and influential political party of the 20th century. They reached fabulous highs, and deep, deep lows. In this series of BEHIND THE RHETORIC we investigate. The New Labour years.

{early photo at the Milbank Club. Original drummer Pete Blunkett before his sacking.}

Formed in a Glasgow basement in early 1994 the band achieved almost instant fame doing hand outs in working class areas. The early line up was Tony Blair and Gordon Brown on lead and rhythm guitars and vox pops. Alistair Campbell dictating the newsbeat from the drums and there were two Johns.

Prescott on thumping bass and Smith, originally the lead singer.. The boys travelled to Europe where their fresh fusion of statist-autocracy & unfunded private partnership provision found a willing audience amongst the EU youth. Original member John Smith died of a brain haemorrhage on an integration tour in Germany. Or possibly he was pushed down a stairwell by Gordon. Nothing was ever proved.

It was on return to the UK that the writing partnership of Blair&Brown really began to bear fruit.

"They was sensational," said Alice Chumbley, a checkout clerk in Liverpool in 1995. " Coz, like before, there was only just grey politicians, like Thatcher and Major and that ginger git one. But now, like, they wuz all sharp suits and carefully combed huur. And Tony had these incredibly tight, tight denim jeans. It looks funny now, but at the time it was gear."

The boys caused a storm amongst easily impressed students and people sick of Tories.

"We wuz all sick of sleezbag shaggin' Tories. Of course back then we didn't know about peerages and Prezza banging his tarty secretary an' that. At the time it was like a breath of fresh gum."

The influential BBC invited the band onto its prime time Newsnight show where their easy charm and Alistair, Tony and Peter's maverick humour {not so much Gordon} won over many worried parents.

Barry Bowden was a builder in 1997

"When me kids first started talking about them an' playin' their speeches I taught it was just another load of long haired loony lefties, youknow. I taught they were all about shaking money at scroungers and puttin' up taxes. But once I'd heard Tony on the Today program, and his awfully posh voice, I felt they were a sort of more acceptable face of left wing pop politics... I mean previously the left had gone in for very folk type bands with crazy lyrics about trees and CND an’ that. But these guys were talkin’ about modernising the state and a minimum wage. It was all very exciting.”

Manager Peter Mandlestein crafted a look for the band that became their early trademark.

The four were quickly characterised as

Tony – The Cool one

Gordon – The Moody one

Alistair – The Manic one

John – The Stupid one

In an interview with Rolling Stone’s Nick Robinson in 2001 he said,

“Well..actually...I just told them to take their ties off. It was pretty simple really. Wear casual shoes. Roll your sleeves up. Put your hands in your pockets. Lean on a desk instead of sitting behind it. And of course never, ever, actually say anything about politics or policies at all. It worked remarkably well. The Guardian lapped it up! And the Murdoch press. Gordon was a problem. Insisted on wearing black wingtips with shorts. And he rolled the sleeves of his dinner jacket up at formal receptions. But I used to put him at the back of all the photo-ops. Until about 2004 no-one really even noticed he was in the band.”

And the famous half shadow Red Rose on the cover of ‘A Hard First Term's Restraint?’ That was you?”

“Hmm..yes..pretty much. Cherie took the actual photos with a Kodak snappy-snap she found in her handbag. We shot it in my bedroom on the window sill.

Alistair wanted some sort of unicorn design instead, I think. Tony didn’t much care. John & Gordon teamed up on me there. They were adamant that a steel fist punching a home-owner against a hammer and sickle would be more appropriate. It was an early sign of some of the band’s artistic differences. I won them round in the end. Gave them the old charm..”

“Did the band often split on those lines? Tony & Alistair – Gordon & John?”

“Hmm..well..Not always. I mean it was always Tony vs Gordon. Always that...Alistair tried to do what he thought was best for the band. John was just a bit thick and enjoyed a fight, so he egged Gordon on sometimes. You know, to relieve the monotony. It’s very boring being on tour for ten years. And unlike the others John didn't have anything to actually do.. People do odd things don't they? I mean ..Just look at Tessa Jowell?

On next weeks BEYOND THE RHETORIC we look beyond the early success to the bands involvement with drugs {MMR} the new 'Peace' movement that so influenced Tony. Against it.

And amidst the backdrop of war and experimental taxation some of the most creative accounting to appear from the New labour years.

Bill, What a start to Sunday! Brilliant. Please continue to take less water with it..

PS - one for your playlist "Gay Tripper".

Really funny. No doubt "The Fool On The Hill" could feature on the playlist, alongside "The Ballad Of Tone And Gordo".

How about: "I'm Fixing a Hole where the debt comes in and stops us all from governing" :)

It always ends in tears.

Wonderful stuff. Personally, the Amadeus were more up my back alley. My recollection of The Beatles is that when the BBC hit the skids in the early 60's as a result of ITV they scrambled for "pop" credibility and The Beatles became the chosen ones with special programmes and pushing. They just happened to be a northern group that made the charts at just the right time. Compared to many other bands around they were a bit ordinary and non challenging.

If you play the very, very, very end of 'A day in the knife' backwards it supposedly says