UK Defence spending too much, not too little 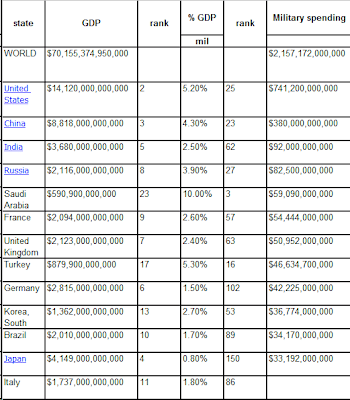 Much is being written by MP's and otehr today being highly critical of the cuts to the UK armed forces. Almost all of this is entirely disingenuous. The real 'cuts' to the budget over the next five years amount to less than 7% of spend - see here for the details. £45.6 billion is spent this year and £44.3 billion in 2015.

To all intents and purposes the spending is the same. The changes are caused by the huge cost of aircraft carriers and other large programmes enforcing cuts on the RAF and Army.

the cost of Libya etc is always met out of central funds so this is not excuse. What he MP's are actually calling for is an increase in defence spending to cover the procurement costs of the Carriers whilst maintaining everything else.

My view is that these people are all nuts. See below the graph of defence spending - the fear in the 'Telegraph' etc is that we are not a front rank nation anymore. Well, good I say, in fact, Japan seems to do OK and Germany too with 30% and 20% less spending than the UK. South Korea manage to spend as much as us and they really are threatened with a major war. The UK is fast falling down the GDP ranking of the world's nations and our spending should refelct this.

The sensible thing for the UK to do would be to reduce defence spending down to 2% of GDP - a good 20% cut more than is envisaged. This can be done by scrapping Trident for a cheaper system or through other cuts.

The benefits will be doubled too. With a smaller military, Politicians would be forced to curb their enthusiasm for crazy wars like the one in Libya - so there will be savings from the general Treasury fund too. It will indeed force an ethical foreign policy on the UK.

I note too, that Ireland and Iceland, our Atlantic island brothers don't see the need to spend any more at all on armed forces. It is well past the time that Britian got over its addiction to acting big on the world stage - we can't afford it and it does not do us any good in any event.
Posted by CityUnslicker

Agree CU. We've seen before that addiction to defence spending, way above our European rivals{bar France} was the real cause of the UK's post war decline.

But we'll have to see what the military knowledge visitors here say.

Last time we tried the 2% GDP route the Argies arrived and it cost us a lot more than treasure to get them to go away.

CU I agree with that about Trident and have for quite some time, but what I can not understand why do we have so many admirals,v-admirals, comodores, generals of all varieties, colonels and generals of all varieties,squadron leaders and air marshalls if the oountry is cutting down on squaddies and lower ranks it would appear to form a sort of inverted pyramid, The Roman army worked on 5 10 100 500 1000(legion)for 7 years thet seemed to do ok until they lost plot.

A quote I picked up a few months ago:
"When it comes to military procurement, Israel spends £9 billion a year and administers its purchases with 400 people. Britain spends £10 billion annually on procurement and has a staff of 23,700 to do it."

Anon - middle management never sign their own P45's - it is a curse of trying to reduce something. In the capitalist market things go bust and you start again eventually - but you can't do that with government/civil service so it is much harder to manage.

Agree with all of that.

But when we send our troops to fight they ought to go with the very best support that money can buy.

That means we must pick our fights a lot more cleverly than we have in recent years.

Also - compare these defence budgets with those for breast enlargements and obesity treatments etc.

we had better sell the Falklands to the Argies for top-$ before we announce your cuts, CU

We don't use these big weapons smartly.

If we're going to spend £billions on 5th generation fighter jets surely we need to be negotiating foriegn air bases in Africa etc? We could buy a small African nation off with some old tornados and half a dozen typhoons painted in their own colour surely?

I agree that we are grossly inefficient in the way spend on defence. As for the recent wars, there were reasons for Iraq 1 & 2 and Afghanistan (even if one disagrees that those reasons were sufficient), but I can see no reason at all why we are in Libya. So I agree there, too.

Where I differ is the proposal to reduce defence spending to 2% of GDP. The prime function of central government is internal and external defence. 2% is asking for trouble.

2% is more than adequate for most of our other European neighbours - admittedly they don't have nukes which is why I would make the saving there.

The Falklands can be defended with a stronger permanent force at a fraction of the cost of the armara. We don't need one, just the jets and subs on patrol to stop the argies thinking they can take it.

It's a blinking good time to be an economist. Quick decisions? Cheeky bastards!

We're in Libya to try to steal their gas, since the Labour government basically didn't have an energy policy and left us in the shit.

Spending 50 Billion pa on the Military is not the source of Britains problems, and as a % of GDP its been reducing for years.

What do we pay in debt interest? something like 35 billion isn't it?
10 B + in foreign aid.
9 B + directly to the EU, but the cost is much more indirectly.
Labour doubled the education and health budgets, something like 100 B in total.
Thats our problems!

Ofcourse the military should not be a sacred cow, but its wrong to pretend there are vast savings to be had (without nobbling our capabilities), we are not America.
As you point out regards the falklands, a lack of defence can end up costing more.

Anon - but we should nobble our capabilities, they serve little purpose other than to make our politicians engage in expensive foreign engagements; many of them are not for the direct defence of the realm.

Agree entirely with your sentiments CU.....and I've never understood why we "own" the Falklands. Do we still think we have some kind of empire? From a geographical point of view they are surely part of Argentina but is there some kind of mineral wealth we have our eye on perhaps??

Jan, the Argentinians are themselves colonialists.

Why shouldn't the British nationals have a fair claim to the Falklands (which never had a native population) when Italians and Spanish pinched Argentina from the natives?

"To all intents and purposes the spending is the same. The changes are caused by the huge cost of aircraft carriers and other large programmes enforcing cuts on the RAF and Army."

Kerist on a bike, the aircraft carriers are about the only thing we do need.

Tanks and artillery, yes we need to keep those around because they have been of spiffingly good use to Qaddafi.

I don't really understand what either of those are being used for in lybia the US and Royal Navy dealt with airdefences the way any modern army deals with aridefences, by sitting fcuking miles off the coast and lobbing cruise missiles at them.

The bluddy navy should have binned some of those extra frigates we don't need instead of sacrificing the ark royal, too fcuking bad if it is hard to make captain cause there aren't enough boats to go around.

I've come to this thread late and am pleasantly shocked by how in agreement everyone seems to be! I would have expected a rampage in the comments!

One thing I particularly like about the idea of a massive restructuring of the armed forces is that we might stop to think about whether our role in the world is to impose human rights on people.

The sad fact is that we didn't spontaneously develop the ideas of freedom and the rule of law. It took us thousands of years, and we went through some pretty bloody periods to get there. The Cameronite/Blairite proposal that we can intervene to short-circuit a society's natural development is found to be stupid as soon as it is written out.

I know this sounds pap, but shouldn't we adopt a kind of Star Trek-style Prime Directive?

The point has been made that Switzerland and Japan both do very nicely from having a strong defence but zero offence.

Japan is shitting itself over the growing strength of China - old enemies. I wonder why the Chinese need that aircraft carrier all of a sudden?

Half our military spending is basically a subsidy to UK industry to produce stuff to sell to the Saudis. Think it might be a false economy to cut back too far - take a look at how much the Saudis are spending.

Just a reminder that we are in the worst global economic crisis since the Great Depresssion and it is clear that things are spiralling out of hand. At least all our foreign adventures are signalling to the wrold that we have guns and we are not afraid to use them. Could be worthwhile to walk and talk big whilst big guns like China are arming themselves to the teeth.

There are going to be some big changes over the next 20 years and some of them will be bloody and violent.

Is there any chance that China might procure some American weaponry in lieu of debt ?