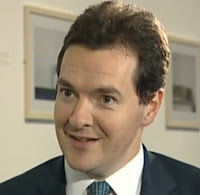 So - Boy George has given 'em their marching-orders ! I'm sure they will snap to it. The *more mature* reader may know the wistful tune ... or should that be wishful ?


Try to dismember Greek debt by November
That ton of cash they beg and borrow
Serial offenders, they’ve been on a bender
They spent like there was no tomorrow
Tried to pretend they could endlessly fend off
The austerity which must surely follow
But in the end, ah, it’s something they’ll just have to swallow …

On the agenda of Eurozone members
To print more cash to make things mellow
New legal tender in all of its splendour
“Keep printing !” - hear Tim Geithner bellow
Who’s the defender of small private lenders ?
Joe Public is a luckless fellow
And in the end Euro-promises tend to be hollow …

Would "Oh Lord, won't you buy me a Mercedes Benz?" by Zorba the Greek, do?

My dedication to Boy George with a Culture Club classic (variation):

(Don't let your fragrant lady see that, Nick. Hope she and you are doing well btw)

That's very good Mr Drew. I'm tempted to say it's Fantastick, but I won't because some won't know what I mean and those who do will groan at the obvious pun.

Nice one. Thought for a minute this was Slade's "In For A Penny". Thus inspired, here's the first verse and chorus: -

In spite of all the holabaloo about the demise of the Euro the UK is not off scot free, guarentees by George to a few UK banks who have have heavily lent in Ireland and various other bits of fiscal fiddling guarantees to some European banks.

With apologies to Bonnie Tyler:

Where has all the good currency gone
And where is all the gold?
Where's the street-wise Hercules
To fight the rising odds?
Isn't there a white knight upon a fiery steed?
Late at night I toss and turn and dream
of what I need

Somewhere after midnight
In my wildest fantasy
Somewhere just beyond my reach
There's someone reaching with a bail out fund for me
Racing on the thunder and rising with the heat
It's gonna take a miracle to sweep this crap away, we're beat ...

Kev - Mrs D (who doesn't read this stuff BTW, got better things to do, so no probs there) sends her regards & a big thumbs up for your Resusci Annie exploits

With apologies to Mr Dylan said...

Where have all the euros gone?
Gone to bailouts, every one.
When will they ever learn?