QE2 vs QE1 compare and contrast

Last time we had QE is managed to put a good 13.1% on the FTSE within a month, after this the FTSE jumped up by the same amount again, topping out at well over 40% up in the end. This time around the FTSE has put on  8% - so as people have been saying perhaps you do not get the same effect second time around.
Having said that, when you consider the storm-force headwinds that QE2 has sailed into with the eurozone crisis - as opposed to 2009 when the recession was bottoming out - it is still quite impressive.

It is easy to say the markets are toppy now and heading down from here, but perhaps looking at the QE impact from last time would lead to a conclusion that the markets have some way up to go yet? 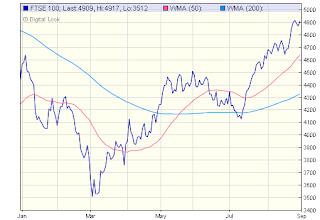 I think the macro events in Europe are going to trump anything that QE can do.

Yes, agreed, it's the eurozone crises holding shares down. It seems 5200 is the new mean for the FTSE.

As for individual shares, it has taken 5 years for me to see any profit on my Tate & Lyle. Some of the smaller ones like AFE and GKP are currently showing a gain. EMED, Heritage, Max, Xcite, Regency, PPA and Firestone are all showing serious losses. I think the last two are dogs but I have medium term hopes for the rest. This is a personal tale not a recommendation.

I've had spome fun and games trying to but at the bottom of the troughs - done well on ARM, Prudential, WPP... but took a bath on Rexam, Glencore

QE2 has finished over the pond surely? Doesn't that count for more?

It's outrageous that governments should print money to keep asset prices up.

Laban, I don't think they care too much about asset prices. QE was initially to avoid a contraction in the money supply which if allowed to continue would have turned the recession into a depression. Secondly QE allows the government's debts to be inflated away, and this hits savers of course.

Also, QE allows the government to buy its own bonds when the market for them might not exist. Not being free to do that leaves you likely to end up like Italy.

In any case, monetising the debts means that the generation that voted in favour of the government that caused the debts will actually end up paying for them, which is intuitively more moral than dumping it on the laps of the next generation who may turn out not to be anywhere near so foolish.